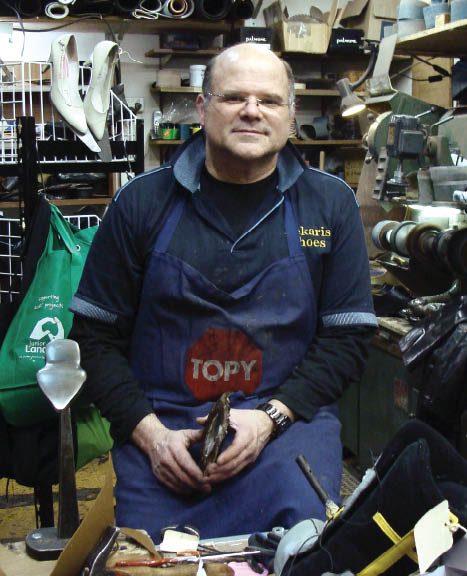 “It’s a mess,” says Steve Rekaris, as he leads me into his back room workshop in Melbourne’s Lonsdale Street, “but I know where everything is,” he adds confidently.

Walls are piled high with shoeboxes, surfaces are covered with knives, pots of glue, tacks, hammers, heel pads and every conceivable piece of footwear in varying states of disrepair and salvation. “We try and do a good job at a reasonable price,” says Steve about the business he has run since taking it over from his dad Bill. “It’s something people need, and you can’t get it on the internet.”

The Rekaris family has been making and repairing shoes, in Greece and Australia, for the best part of a century. It was Steve’s grandfather who began the tradition in the 1920s in the village of Nestorio, northern Greece. His son Vassilios, the eldest of three children, arrived in Melbourne in 1954 and after working for General Motors, Bill opened the doors of Rekaris Shoes in 1958 in the heart of Melbourne.

For the next 20 years, by dint of hard work, the business grew in its Exhibition Street premises, offering expert shoe repairs and hand-made footwear at a reasonable price. “I learned from my grandfather and my father,” says Steve, who took over the family business when it moved to its first Lonsdale Street address in the late ’70s.

Rekaris Shoes relocated to its current address in the Greek Community building just three years ago. Moving location has been a regular occurrence: a result of the regularly changing built environment that is Melbourne’s commercial heart. The shoe business has changed too, says Steve. “There’s a lot of throwaway shoes these days. Men are buying more from the internet.”

What makes a good shoe? “One that fits, one where the designer has thought about how it works, one which has a zip that doesn’t break on the first day of wearing.” While the shop stocks only men’s shoes for sale, as Rekaris says “you need to carry too much stock for women’s shoes”, women’s shoe repairs is a big part of the trade. “People let there shoes go too far these days,” says Steve. “We rejuvenate them, and still make the odd pair.

Vintage is in vogue these days.” As well as making shoes, the shop also acts as a distributor for other handmade shoemakers in Victoria. Two generations of Melburnians have crossed the threshold of Rekaris Shoes, but perhaps its most famous customers are the professional cricketers from interstate and beyond, who have rocked up in search of match-winning footwear. “It started years back, when Reebok sent the South African Test cricketer Gary Kirsten, who was touring here at the time. “He wanted the normal soles on his favourite pair of runners replaced with spikes. Word spread and soon Steve Waugh and Brett Lee were getting their’s done. A lot of the Victorian players get them done here.”

At 83, Steve’s father is still involved but semi-retired, overseeing the family’s second shop in Coburg, the premises he bought 50 years back for his own father. What makes a sustainable business that can last three generations? “It is about hard work, but you must also love your work,” says Bill on the line from Queensland, where he’s on vacation – fishing, away from the chilly drizzle of a Victorian winter.

Meanwhile, Steve’s pastime of choice away from the shop has always been surfing. The cobbler, who has always found his relaxation at Bells Beach, will be the last Rekaris to run the family business. Steve is unmarried and has no children. “It would be good to create some kind of apprenticeship, I’m the last in line.” Rekaris Shoes will be on the move once more soon.

“I’m going to have to leave again,” says Steve, referring to the 12 month’s notice he has been given on his lease, following the decision to demolish the present Greek Community building in order to develop the new $14 million ‘Hellenic Tower’ on the site. “Either I stay in the city or I go to dad’s shop in Coburg, If I go there, I hope people will follow me there. I’ll do pick up and delivery. We might be here longer, who knows. Business is business,” he says philosophically.

No doubt wherever Rekaris Shoes opens its doors, customers wanting its time-honoured values of hand-made quality will follow in its footsteps.