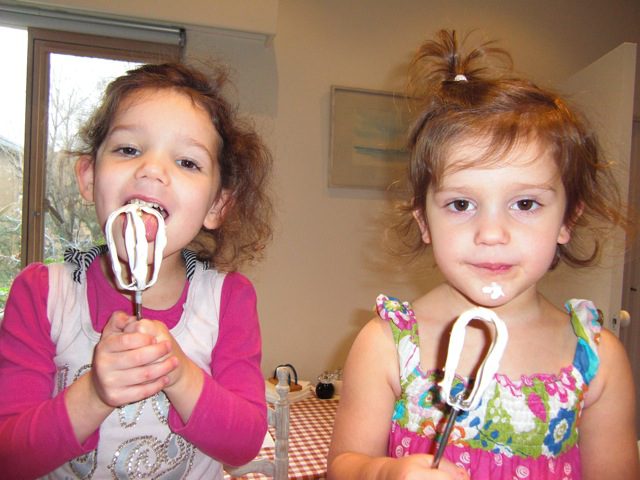 My love for food has stemmed from always being involved in someone’s kitchen since I was a small child, as a young woman and as an older woman there was my mother in law who I believe was the cook to beat all cooks. I have learned a lot from these people and I am still learning, as I have been all my life a “learn” junkie and not only about food.

My own students in the kitchen are my two small grand-daughters, Antigone who is six and Elektra who is four. I do have rules though when it comes to including young children in the kitchen, I never allow them in when I have hot plates on with saucepans and frypans, there is danger of accidents, boiling saucepans and frypans tipping over or even the children climbing up to look. The time to include small children in the kitchen is when there is cake making or cookies being made. Antigone, Elektra and I make koulouria together and I give them their share of dough to make their own shapes, they also help me in mixing cakes and they get to lick the beaters and scrape the bowl from the left over mix, something I still love doing myself. This is a recipe for koulouria that your children can help you make stress free.

NOTE: The original recipe gives no measurement for the flour but states as in all home Greek recipes “as much as it needs” όσο σηκώσει. In my trials it is about one kilo. Also make sure that you sift the baking powder with the flour prior to adding. NOTE: the tablespoon measurements must be a level talbespoon

Heat oven 180C NOTE: never beat the flour with beaters it makes the mixture tough as the gluten is overworked.

1. Beat the oil with the sugar

2. Add cinnamon, ouzo, and the cinnamon juice and mix

3. Add the flour and mix with your hands in a big bowel

4. Cover with a tea towel and allow the dough to rest for about half an hour

5. Make the koulouria, lie out on biscuit trays and bake for 20 minutes