Anna Polyviou is making a mess and she loves it 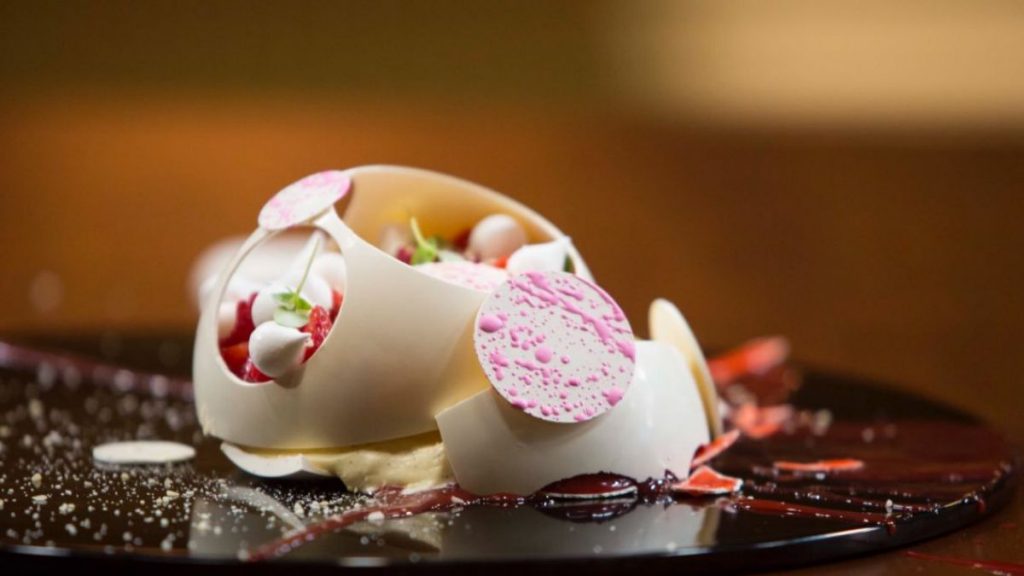 When Neos Kosmos arrives at the Shangri-La Hotel in Sydney to interview Anna Polyviou she is being mobbed by a group of adoring fans. Since Polyviou’s carrot cake won an award for best dessert in Australia, the Greek-Cypriot’s fame has spread across the globe.

Polyviou’s award-winning creation led to her appearing on the MasterChef elimination challenge in 2015, and since then she has been an annual feature on the high-rating Channel 10 program. Last year she was also a regular guest on Channel Nine’s Family Food Fight and the pastry chef uses each TV appearance as a chance to showcase her new dessert creations.

Last weekend, Polyviou was on the front page of Sydney’s The Sun-Herald as a part of a feature story for its Sunday Life magazine alongside three other prominent Australian women including Labor Senator Penny Wong.

While today Polyviou is happy to take selfies with her fans and looks at ease with the attention, at the beginning she found her growing fame unsettling.

“For the first year I really struggled with it,” she says.

“All of a sudden I was an overnight success and everyone was stopping me. From security at the airport, to the lady who made my coffee, it was just very overwhelming for me.
“People were wanting to take photos, and coming out of shops in Melbourne and stopping me, and cars were driving past and beeping their horns. I was like ‘what is going on here? What the f**k?’ I was like ‘who are all these people coming up to me?'”

As her profile started to grow, Polyviou sought guidance from another well-known TV dessert chef and she says that advice was invaluable.

“It was actually Zumbo,” she says.

“He said to me ‘these people are your fans, these people care about you, they love you and they are so excited for you and you have always wanted this’.
“That made me reassess that they weren’t trying to be rude. They’re not trying to do anything. They just want to say hello. They want to say ‘congrats, you’re doing a great job’. And that changed it all. That’s why when people want to take a photo, you take a photo. If people message you then try and make the effort to reply to them no matter what it is. It’s all about trying to do that and how you come across.”

What turned Polyviou from a talented and respected pastry chef into a bona fide celebrity was winning awards such as Gault&Millau Pastry Chef of the Year in their 2016 and 2017 awards.

While she is happy to have her work acknowledged, Polyviou says she is more focused on her creations.

“I was very honoured to win those awards because there is some good talent,” she says.

“But I just continue on doing my thing and I don’t get too focused on what anybody else is doing or what people think of me. If people are going to judge you, you just don’t worry about it and you keep doing what you are doing. And that will make you successful and that will take you to a different place and that will also allow you to meet some great and amazing people as well.
“That has always been my motto. You always be kind to people and you be yourself, and you be who you want to be.”

After Polyviou’s 2015 MasterChef appearance, the following year she debuted her Anna’s Mess dessert and like, punk bands who broke their guitars in the 80s, the pastry chef literally smashed her dessert to pieces.

And Polyviou, who has a distinct pink mohawk, says she likes that punk analogy a lot.

“I never thought about it like that,” she says, laughing.

“It makes me smile, it’s pretty awesome. Anna’s Mess is something I created a long time ago. It’s been an ongoing process. Originally when I went on MasterChef I wanted to go on a stepladder with goggles, but they said, ‘no’ so instead I picked it up and threw it.
“I wanted to do it to see people’s reactions. Some people didn’t like it. But 99 per cent of people went berserk. They thought it was the best thing ever because the dessert looks so beautiful and elegant and you take so much time and then I just picked it up and threw it. People are like, ‘What? What are you doing?'”

The video of Polyviou smashing her Anna’s Mess went viral and the success of the dessert creation started to see her build a following overseas.

“I went to Taiwan for a promotion within the hotel and there was a whole room of television cameras,” she says.

“I was on all the news channels and I couldn’t walk down the street. People were walking up to my hotel room door and knocking on it, it was nuts. Then we were selling Anna’s Mess and there were lines wrapped around the street leading into the shopping plaza.”

Dealing with fame wasn’t the only issue Polyviou had as her career took off in Australia. Early on some members of the local Greek community had problems dealing with her distinct look. But over time she has been accepted and is now embraced as a role model of that very community.

“It makes me proud being Greek Australian,” she says.

“I’m so proud of the fact that I can speak Greek fluently. I am very honoured that I might be going over to Cyprus to represent Australia. I have also been invited by a group of women from the Greek community to the NSW Parliament House and that’s an honour.
“I am also very good friends with Father Arthur at Mascot church and he asked me to speak to the young people there and I did, fluently in Greek. They’re probably looking at me and saying, ‘who is this woman who’s standing here and speaking to us with all the earrings’.
“I tried to change their mind and concept on how we should not judge and label people.”

Last Christmas, Polyviou created a train that stood at the entrance of the Shangri La Hotel’s lobby. The stunning creation was made from gingerbread, icing sugar and lollies, and featured wheels that moved, turntables that spun, and lights that flashed with the train also blowing ‘smoke’ out the back.
Again, Polyviou’s creation became a global success and it has given her an idea for her next big project and, amongst all the other activity, 2018 will be another big year for her.

“First my cookbook comes out in July,” she says.

“I am so proud to be able to produce a cookbook that features my whole journey from the complex stuff I do on TV, to food my mum has taught me to cook, to all the cool stuff we do in the hotel.
“Then I want my own TV show. What I would want to do is give people a behind the scenes view of what we do here at the Shangri La. Like the Gingerbread Train I made during Christmas.
“I want people to see what actually goes into it. I also want them to see how I organise my annual Sweet Street event that has DJs, breakdancers, food stalls, skateboarders riding up and down, and graffiti artists.
“Then I also want to give people a look at how I organise my overseas events in places like India, Singapore, and China. I want people to come on the journey with me. At the moment I am loving all of it. I love that I am working in a hotel that allows me to grow within it, its brand and my brand as well. What an opportunity. It’s all so exciting.”