Celebrity chef Karen Martini talks to Neos Kosmos about her Greek family, and her love of Arni sti Souvla at Easter 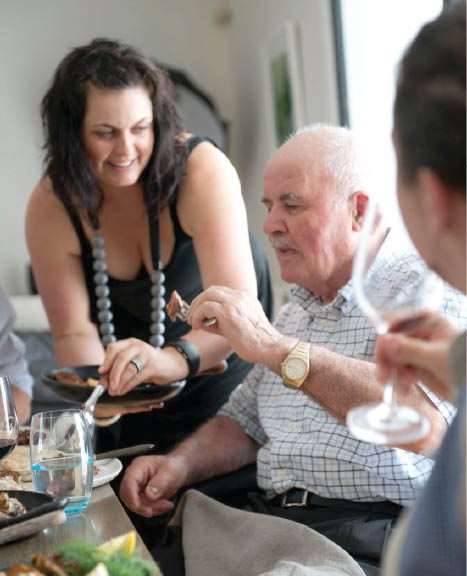 We all know how precious mothers and aunties get about the preparation of Easter lunch. Even though you think year after year ‘how do they pull off this huge luncheon with little to no help?,’ you know deep down that there is still no way you can bring a dish to ease the day. It’s almost frowned upon in the Greek community to offer a side dish to accompany Greek Easter lunch.

But what if that person was leading Australian chef Karen Martini?

“I take a dish occasionally and [the family] get a bit excited, but my mother-in-law still likes to look after it all,” she confesses.

With 20 years professional cooking under her belt, the Melbourne chef, restaurateur and food writer trained at top restaurant Tansy’s in the early ’90s and has headed restaurant kitchens including the iconic Melbourne Wine Room, white-hot Icebergs Dining Room in Sydney and her current artisan pizza restaurant Mr Wolf in Melbourne’s iconic St Kilda.
Along the way, she has won countless hats and garnered a plethora of food awards.

Then there’s the television gigs such as a regular judge on My Kitchen Rules and the recipe queen on Better Homes and Gardens that have made her a household name and a regular contributor and food editor of the Sunday Life magazines. To say she’s a busy bumblebee is an understatement.

But what many of you might not know is that Karen Martini has a secret Greek side to her cooking. The chef is married to Michael Sapountsis, and thanks to his mother’s staple and nourishing Greek dishes, Karen’s curiosity was triggered and the chef made a concerted effort to explore Greek cuisine.

Karen says through her mother-in-laws dishes, she has been inspired to think about the flavours of what is offered. Olive oil, feta, eggplant and stuffed peppers are all staple ingredients used.
“It’s all very simple peasant style dishes, they’re not complicated,” she says of the familial dishes.

“When I think about Greek food, I think about family and friends, and would describe Greek cooking as coming to a table of abundance, everything is laid out there’s a lot of conviviality there.”
Karen says upon entering her husband’s family home, she is already being offered food.
“You have to be hungry if you are going there, and then on your way out it’s the same and you have to take something with you,” she says laughing, “it’s a very generous culture.”

On her website for restaurant Mr Wolf, she describes herself in the quote: “My food is an expression of my heritage, a product of my curiosity and the result of my hunger.”
Nothing could be more true in the research and reading she has put into Greek cooking. So much so she has included some of the recipes she has developed into her cookbooks.

And even though the last time she travelled to Greece was 15 years ago – when she and her husband travelled throughout Greece over a month – she often reminisces about the food and flavours she explored, and noticed that the diet was based around fresh and seasonable produce of vegetables, beans and cheese.
As her husband’s family derive from Florina, pites – specifically the way the pastry is made – is a critical part in the cuisine of this part of Northern Greece. And Karen has embraced her mother-in-laws recipe for pastry and developed numerous dishes with this. By experimenting with different fillings and herbs and cheeses, she has applied her in-laws’ technique to modern cuisine, and she never looks past including lamb in her pastry dishes.
It’s the lamb that Karen is looking forward to the most this coming Greek Easter.

“We have lamb at every celebration, it’s a staple to any celebration and it’s a big process.
“The cooking begins at six in the morning, and mind you if you arrive late there’s only a big carcass going around the spit because they eat it beforehand,” she says as a warning.
“Greek is a spirited culture and a wonderful thing to be part of, and my kids are very much a part of it too. I love the fact that they go up to a spinning carcass and rip a bit of lamb off.”

And as much as I love my Thea Aristo and Theo Leonida’s Easter feast, I wouldn’t say no to a Karen Martini dish being added to the mix – even if that does mean getting ex-communicated from family Easters to come.