Live at The Apollo 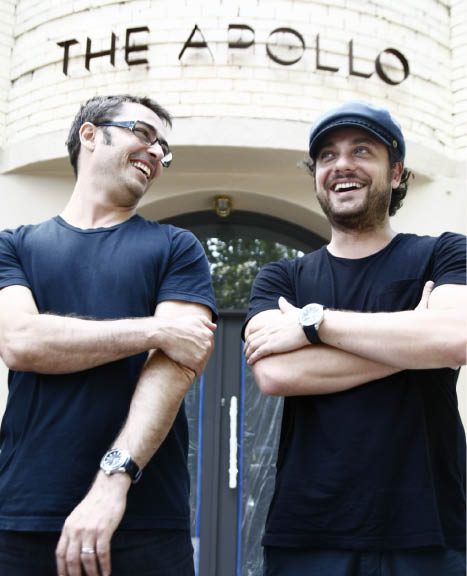 “It’s where Greek cuisine should have gone a long time ago,” says restaurateur Sam Christie of the renaissance of Greek cuisine; the same renaissance that is creating a buzz in Sydney at his eight-week-old restaurant The Apollo.

Along with partner and chef Jonathan Barthelmess, they do just that. Together they have created simple Grecian food, but with a modern twist. The expertise the lads bring to The Apollo is second to none.

As the co-owner of Longrain in Sydney and Melbourne, Sam brings an adept knowledge of how to run a successful restaurant in Australia, combined with Jonathan’s culinary skills, they have developed a restaurant that teeters between the traditional and the now.
It was their family that brought these two together, but also their combined want to create a modern taverna in the heart of Sydney that would showcase their heritage as well as their love of creating simple, produce driven food.

“We just wanted to do beautiful Greek food and keep it simple and use the best produce and use some modern techniques, and a bit of whimsy from Jonathan as well,” explains Sam.

Their menu is a homage to Greek comfort food, with an edge using new cooking techniques to lift flavours beyond seaside taverna’s and psistaries. Kritharaki pasta braised ox tail tomato skordalia, handmade pork and lamb loukaniko, sardines with chilli, lemon, and parsley are just some of the delicacies that grace the menu of The Apollo. And complimenting the food is the way it’s intended to be consumed.

“It’s like a modern taverna – it’s loud, it’s fun, it goes late, people drink a lot of wine and have a really good social time.
“It’s almost forced to share a plate of food. We get the occasional conservative types who want to have their own main course who get the big plate of lamb in front of them and they feel a bit silly but you know…” says Sam with a laugh. And it’s just that, that gives The Apollo an absence of pretention, something that can affect with modern dining.

Sam himself has a Pontian Greek background but it’s chef Jonathan’s Castellorizan where he has inherited all his Grecian influences, and they shine through on the plate.
“There is quite a Venetian influence in [Castellorizan] food as well, so that’s the thing about [Jonathan’s] food background is that it is so diverse being close to different spices coming from Turkey and that’s coming out in his cooking, and more so in the spices in the marinades.”

And although they source the freshest local produce to showcase on the plate, they make it a point to buy Greek products that gives you that Hellenic flavour burst in every dish… that you can wash down with one of the many Greek wines on the menu.
When creating the restaurant, Sam and Jonathan had one thing in mind, to “set up the restaurant as a place [they’d] also like to eat [themselves].
“It’s a place to relax, drop your guard and have a good time,” says Sam.

With architect George Livissianis on board, they set out to create an atmosphere reminiscent of establishments in Greece, where the golden Mediterranean sun would blush your skin whilst sharing an ouzo with a friend.

“We all sat down together and looked at different colour palates and the site as well and we wanted the colour palate to remind us of the light that you have in Greece, it’s almost like a golden glow – especially in the afternoon – and also the country side,” says Sam.
Everything was considered in the fit-out of The Apollo; from the tones to the slight splash of colour, to the simple, honest settings to the rustic walls depicting touches of a Greek ruin, and the rough concrete, granite and slight brass detailing giving that familial comfort of the Greek countryside.
And the name itself has a lot to live up to.

Named after the Greek god Apollo who, let’s face it, knew how to have a good time, Sam tells me the name also came from New York’s famous theatre in Harlem.
“You often heard in musical terms ‘live at The Apollo’ whether it be Frank Sinatra or James Brown, there’s a lot of tradition there.”
So with the coolest ancient Greek god by their side, and one of the most iconic theatres of the world on board, a good night out is guaranteed. I think it’s safe as houses that The Apollo ensures a pleasurable experience not to be forgotten.