A trip to Naoussa, only in Melbourne Last week ended on a high note, kicking off another, long week of Greek wine appreciation; an annual tradition we have religiously been honouring.

This year we found ourselves being immersed in the unique dark tannin of the Xinomavro variety, Naoussa’s signature wine, in a Cretan cuisine restaurant.

Elyros and Epocha’s trio, Angie Giannakodakis, Disa Dimitrakakis and chef Guy Holder took us on yet another culinary adventure on Friday and Saturday nights. Due to the unique mix of its flavours and aromas coming from an array of earth and territory plantation influences, it can become a great pairing combination for most dishes that feature on a Greek menu and both nights, with the culmination being Saturday’s dinner, proved that.

On Friday, we were exposed to 22 wines that fall under the Xinomavro category, offered to us by Markovitis Winery, Vaeni Naoussa Coop, Estate Tsantali and Naoussa Boutari.

Representatives from each winery would explain the uniqueness of each vintage while Elyros’ staff would make sure we could compare the flavour both on its own and accompanied with local mezze the likes of green leaf and cheese kalitsounia, fava, taramosalata, seafood kritharaki, lamb meatballs and marinated chicken skewers among other canapes, spicy and pickled delicacies.

Saturday’s private seated event, however, heightened our senses and brought on not one but many consecutive tastebud explosions.

Angie Giannakodakis put into effect her sommelier talents and in collaboration with chef Guy Holder prepared a very well thought out menu to match their favourite Xinomavro wines. A much needed event, to the pleasure of many predominantly Australian Melbourne-based wine lovers, esteemed Greek community officials, Hellenic wine distributors, and press.

“It is through such events and gatherings that we can further establish our beautiful Greek wines in the Australian market,” Angie said while popping the first bottle open.
The journey into northern Greece’s flavours began with a white, chilled, fruity Xinomavro, Kelesidi’s Malagouzia followed by a tray of freshly baked breads, olives and feta cream. 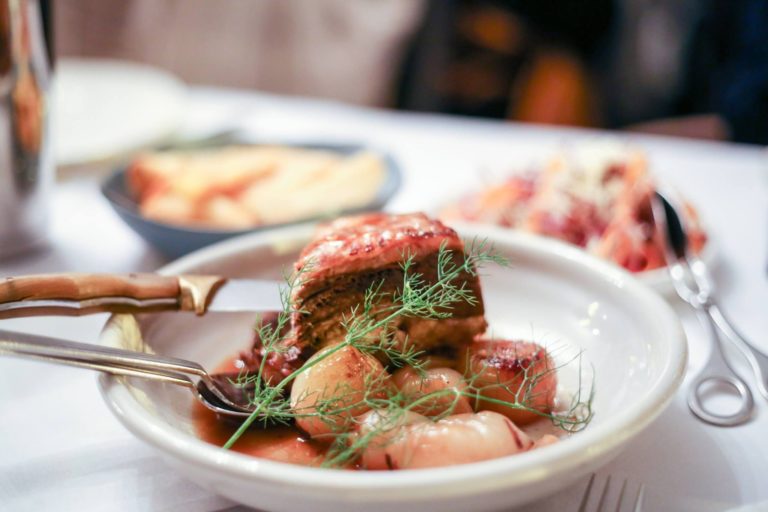 Angie chose to pair the starters with the 2016 Dalamara Naousa, the 2014 Vaeni Damascenos and the 2012 Foundi Naoussa.

The first dish, delicious barramundi on a bed of wine braised calamari, black rice and nettle accompanied with a wild leaves, carob and walnut salad was unexpectedly paired with the 2014 Lousi Naoussa, the 2013 vintage Elinos Taralas and the 2009 Merhali Kelesidis Xinomavro.

The way the earthy flavours of the reds blended with the distinctive taste of the barramundi and the nut-based salad was more than a pleasant surprise that had even the most hardcore white wine aficionados admit it was a match made in heaven. 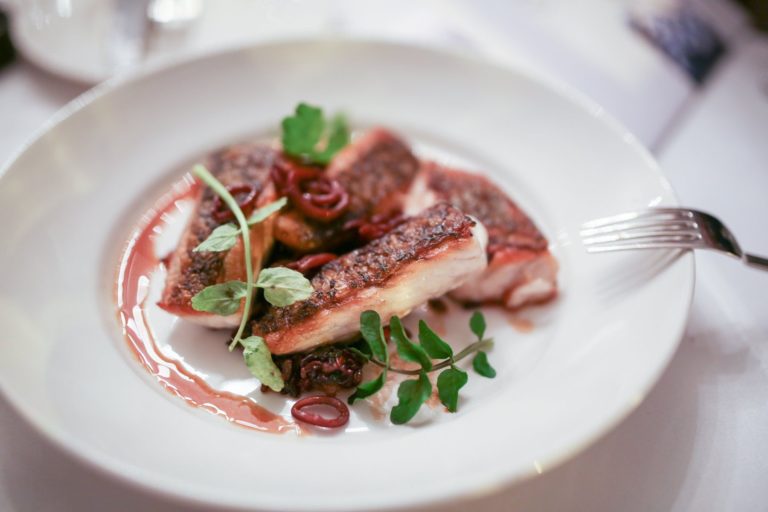 Moving on to the mains, we immersed ourselves in the more full-bodied 2015 Thymiopoulos Alta, the 2013 Mavro Naoussa, and the 2012 Vaeni Grande Reserve all perfectly complementing our dishes. As hard as it was to choose between a) the juicy slow-cooked lamb in bulbs and oregano and b) the roasted chicken in homemade traditional hilopites, chestnut stifado and green olives, it was even harder to pick our red vino favourite. I believe we all had a second round of drinks.

Finally, two-and-a-half-hours later, we arrived to the much awaited dessert time. As an unexpected palate cleanser we had platters with Cretan graviera (hard yellow cheese), honey from Naoussa and a variety of rye and wholemeal rusks, aka paksimathia. 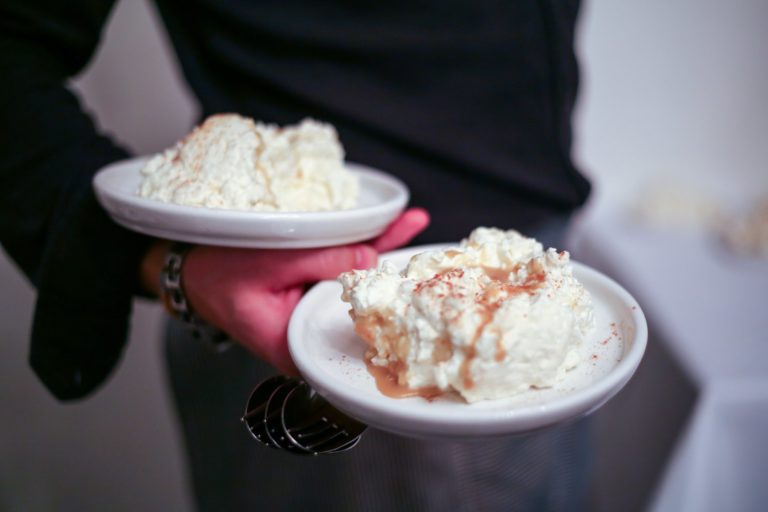 That prepared us for the sweeter, stronger more dessert-y wines, the 2014 Tsandali Naoussa Reserve, the 2016 Melitzani Naoussa, and the 2015 Kir Yianni Ramnista. The actual dessert part did not disappoint either, with guests begging for more rizogalo, the Greek rice pudding with apple, caramel and sheep’s yoghurt. A round of traditional Greek spoon sweets came right after, with a generous dollop of yoghurt topped with almonds and stewed rhubarb syrup. 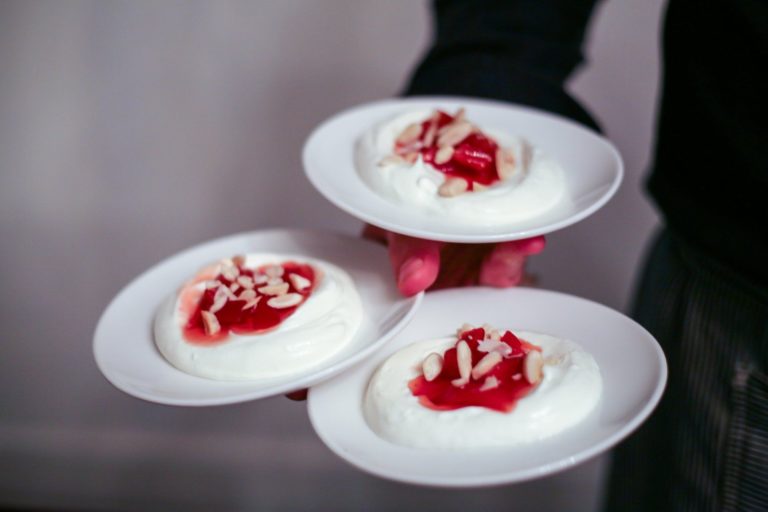 The last wine of the night was the Chrisohoou Naoussa, a versatile red offering cola, cocoa, and coffee aromas mixed with earthy, balanced flavours of plum, dried cherry, cocoa and spice.

Words cannot accurately describe what we experienced, which is why I’ll leave it to the photos to make you salivate.

THE UNIQUENESS OF THE XINOMAVRO WINE
The region is affected by the Ionian and Aegean seas, creating a mosaic of soil in between, intercepted by rocky and clay-infused earth. The Mediterranean climate offers high day temperatures and lows at nights, humidity and fog due to the median altitude with the grapes maturing in a cool climate. As a terroir-expressive variety, it changes character as it changes locations. Typical aromas include spices, ripe tomatoes, black olives, violets, wild strawberries, dark chocolate and leather. Xinomavro is therefore a well-structured, full-bodied red wine but can also be made into a white wine, rose wine, sparkling wine, passita and grappa; it is not an extracted varietal; it is a wine with high acids and tannins that maintains its elegance. It also has great ageing capabilities and is often compared to Nebbiolo from Piedmont with many similarities, only difference being that Xinomavro, price-wise, is very affordable starting as low as $15. Located in Macedonia in the north of Greece, approximately one hour east of Thessaloniki, Greece’s second largest city, is the wine region of Naoussa, one of the first regions in Greece to receive protected denomination of origin (PDO) status in 1971 and is the home to the native grape variety Xinomavro. Xinomavro comes from xino (sour) and mavro (black) and is one of the two varieties that put Greece on the international wine map; the sole variety permitted under PDO Naoussa. The Xinomavro is the last grape harvested each vintage.

Although not a vast region, compared to competition outside Greek borders, the area has more than 20 wineries spaced across a few acres of land with vineyards each spanning 350 metres across. There are currently two types of wine – a dry red and a semi-sweet red – that bear the Naoussa VQPRD indication. In the EU, VQPRD stands for Vins de Quality Produits dans des Régions Determinées, and means that the wine has been certified as falling into one of the common gradations within the area of origin. Within the VQPRD also falls Naoussa Reserve which ages for 24 months, and Naoussa Grande Reserve that ages for 48 months. 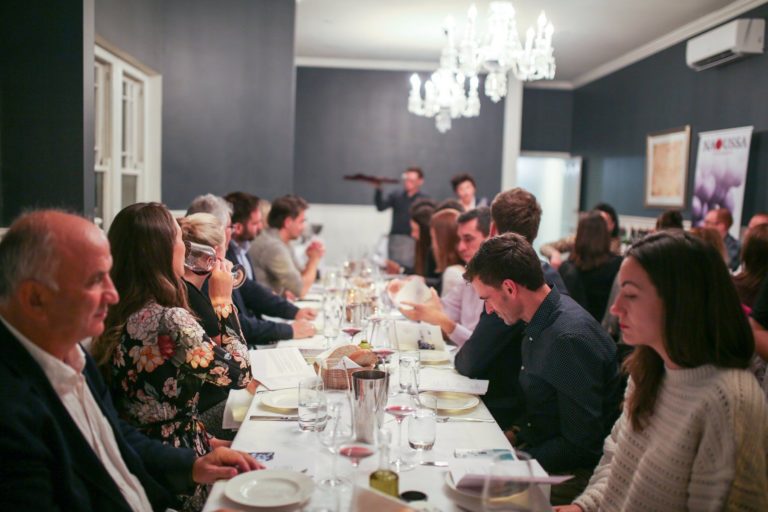