The immigration debate that isn’t 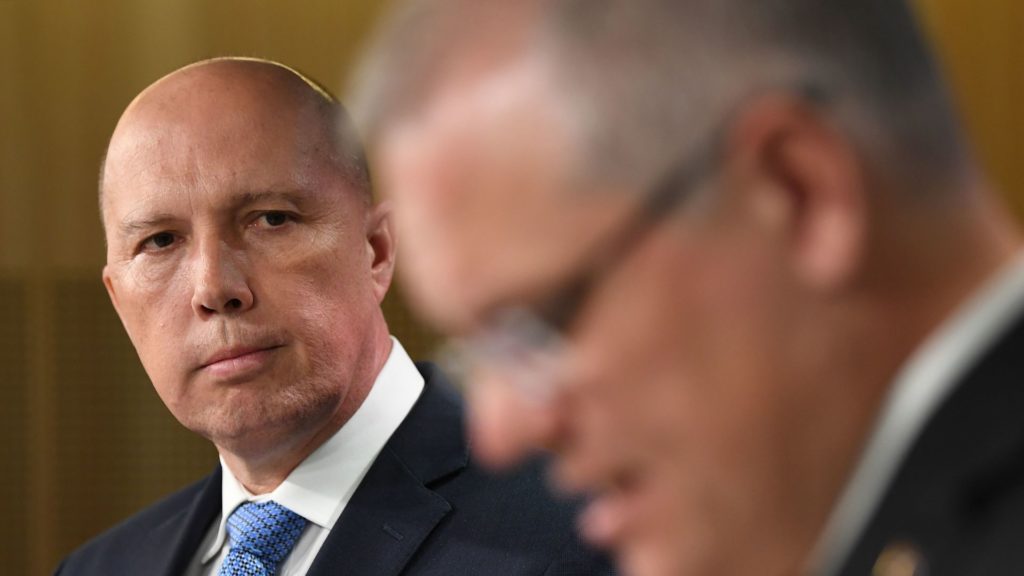 Minister for Home Affairs Peter Dutton looks on as Prime Minister Scott Morrison speaks to the media during a press conference in Sydney on Thursday. Photo: AAP Image/Joel Carrett

Prime Minister Scott Morrison announced the “fair dinkum” reduction of the migration ceiling from 190,000 permanent migrants to 160,000 last week. This announcement was cynical and far from ‘fair dinkum’, nor was it premised on reality.

Sydney and Melbourne do attract most of permanent immigrants. These cities provide access to jobs, particularly entry-level employment, which new migrants take first, yet Adelaide, Darwin, and other regional centres cry out for more immigrants.

Various parties have made that population dead cat jump over the last 20 years. The ALP’s Bob Carr is a most vociferous anti-immigration advocate, One Nation’s Pauline Hanson naturally, the Greens, even our former Prime Minister Julia Gillard, flogged that horse.

Prime Minister Morrison did not mention the 315,411 temporary entrants per annum, of which over 130,000 were overseas students, on which our tertiary sector is over-dependent.

Universities have lowered their entry-level requirements to allow in fee-paying students, many now with low levels of English language skills. Tertiary institutions’ thirst for fee-paying foreign students is damaging what was once attractive about our universities, the quality of our education. Worse, they are harming foreign students, many of whom suffer from isolation, lack of services, and ultimately poor academic outcomes.

The Greens are closest to One Nation in their desire to reduce immigration. Unlike One Nation, the Greens do not use racist grounds, but rely on the unintelligent ‘sustainable grounds’ argument. This argument is not different as the one proposed by the prime minister, albeit with different audiences in mind.
If migration policies were left to the Greens, the numbers of permanent immigrants would be more than halved. There would be increase in humanitarian entrants to around 40,000, from the current 23,000, and a trickle of permanent migration limited to family reunion. Their statement dog whistles it, “The current level of population, population growth and the way we produce and consume are outstripping environmental capacity. Australia must contribute to achieving a globally sustainable population and encourage and support other nations to do the same.”

Planning, proper environmental strategies, appropriate new sustainable urban and transport developments, would be a better focus for Labor and the Coalition. However, regardless of our mixed planning, we do fairly well in housing, transporting, employing and servicing our new settlers compared to most developed economies.

The benefits of migration to Australia are socially, economically and culturally obvious. One needs to think about migration the next time they drink coffee, eat kebabs or noodles, look at our architecture, purchase entertainment including sports, use new technologies, or examine linkages to international markets. Not to mention love, as increased intermarriage between cultural groups becomes a reality.

The poorer the migrants are the more motivated they are to achieve and develop educationally and economically. Poor permanent migrants, not temporary entrants or foreign students, buy cars, white goods, housing and education.

As journalist George Megalogenis points out in his 2004 book, Faultlines: Race, Work, and the Politics of Changing Australia, “There is a greater chance of being left behind in a new Australia if your lower-income parents are ‘white’ and were born here, than if they came by boat from, say, Vietnam.”

Our Prime Minister is dog whistling because of focus groups, push-polling, and advisers’ poor advice – all in the service of gouging votes from outer suburbs and marginal seats across Australia, by energising their fear of over-population. Many immigrants, who populate marginal seats, especially in outer urban areas want to shut the door behind them.

The absence of serious social and racial conflict in modern Australia is premised on our relatively successful immigration and integration policies since the end of World War II.

The race-based Immigration Restriction Act of 1901, commonly called the ‘White Australia Policy’, was endorsed by conservatives, labour unions and the Australian Labor Party. It created economic downturn as Chinese immigration was halted, and the entrepreneurial flair and economic development of Melbourne and Sydney, largely due to Chinese migrants, was dramatically reduced.

The desire to increase migration under the motto “populate or perish” by the post-War Labor leader and Minister of Immigration, Arthur Calwell, was underscored by his desire to populate without Asians.

Calwell writes in his 1949 I stand by White Australia, “Establishment of a quota system for Asians would be an undermining of that Australian ideal which, I am sure, Australians would not tolerate.”

Greeks, Italians, Maltese, Jews, and former Yugoslav people, once restricted by the White Australia Policy, were now considered, if not ‘white’, at least more attractive by nativists.

Chinese permanent settlement in Australia outstripped British immigration from 2010 onwards. The Parliament’s website writes, “China surpassed the UK as Australia’s primary source of permanent migrants in 2010–11. Since then, China and India have continued to provide the highest number of permanent migrants.”

There is no indication of willingness, ideologically or economically, for any government to halt Chinese and South Asian migration. When John Howard was diverting attention towards refugees and asylum seekers, Australia experienced one of the largest immigration booms since the post-War period from China and South Asia.

Planned immigration is important, and the absence of major social tensions in Australian society is a good indication of how that has worked. Migration policy fails when it is used as political and cultural bait for votes.

Governments in Australia have always sought to determine the numbers of permanent settlers to Australia, knowing full well, that the real population increases and economic development in developed nations are sustained through continuous permanent migration.

The other red meat to the masses of calling for ‘Australian values’, as recently highlighted by our Citizenship Minister, Alan Tudge, is as disingenuous as is the call to reduce immigration numbers. This is not a new argument; it has been around for a long time and is used by both major political parties.

There are no unique Australian values. We have built on ancient democratic and civic values that accord with most modern democracies. There may be good reason to have civic lessons, such as on the policy of multiculturalism, gender equity, acceptance of LGBTIQ people, racial discrimination and so on – especially those that come from less developed traditional societies, or even theocratic, and authoritarian nations. However, there are even more real and practical reasons to have free and accessible English language lessons, and labour market programs, rather than so called ‘Australian values’ lessons.

Maybe the recent terrorist incident, where one immigrant, lost and deranged, killed another immigrant, who made a great life in Australia, and the plot by Australians uncovered by authorities may not have arisen, if we provided foundational understanding of the notions of democracy, justice, equity, liberal and social values, and the rule of law, many of which surpass historically British, Christian, and Muslim derivations of law and justice.

Then again, crimes will be committed by anyone, thus the need for laws. Australia was colonised by those once considered criminals and no one ever asked Aboriginal People about settlement and immigration intake. In the end, Australia is and will forever be a modern democratic nation born and fuelled by migration and diversity.