The exhibition “The Greek Monsters,” plays on European criticism, suggesting the beasts of lore are victims as well as predators, and teaching tools for a society sorely lacking in direction 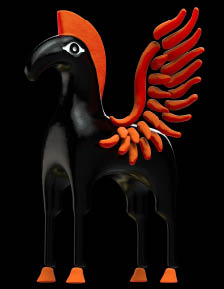 In Greek mythology, King Sisyphus pushed a boulder up a hill, over and over, forever, in a futile exercise that a few commentators have compared to international efforts to revive Greece’s dire finances. Homer’s Odyssey, whose protagonist endures years of peril on his way home after the Trojan War, is seen as another metaphor for the ordeal of a nation in its fifth year of recession.
Scylla and Charybdis, the sea monsters flanking a strait that forced ships to brave one side or the other, are associated today with the expression, “between a rock and a hard place,” the predicament of modern Greeks left with no good options.
Turning to allegories infused with one-eyed giants and other fantastical creatures to explain the Greek crisis, which threatens to morph into a financial crisis worldwide, seems like an indulgence at a time when the state, and ordinary citizens, can’t pay their bills.
Yet ancient myths lend context to the swirl of acrimony and austerity, bailouts and brinkmanship, coalitions and currencies, debt and deadlines, that define the social and economic ills of Greece, which is in danger of falling out of the euro currency. It turns out the legends have plenty to say about hubris and ruin, order and chaos, boom and bust.
“Greek mythology is full of examples of how mortals should find the middle way in order to live a happy life, or as it said on the walls of the Temple of Apollo at Delphi, ‘Nothing in Excess,'” Peter Meineck, associate professor of classics at New York University, wrote in an email.
Icarus paid for his arrogance when he flew too close to the sun, plummeting to his death when his wax-and-feather wings melted. Prometheus stole fire from the gods for the sake of mankind, and as punishment, he was bound to a rock, where an eagle daily fed on his regenerating liver.
Similarly, reckless conduct and the flouting of rules fueled the crisis in Greece, which gained some political stability with the formation of a coalition government this week. Some experts assign blame beyond Greece as well, citing structural deficiencies in Europe’s economic club and the insistence of Germany and other creditors on unbending austerity measures that have sliced into the quality of life.
Many Greeks are frustrated by the damning perception that their mistakes brought the global economy close to a sharp downturn. They share, one allegation goes, the same destructive qualities as their mythical monsters. Rather than attacking the idea, one Greek firm, Beetroot Design, embraces the image of Greece as a modified cyclops of modern Europe.
Its exhibition of images and sculptures in the Benaki Museum Athens, “The Greek Monsters,” plays on European criticism, suggesting the beasts of lore are victims as well as predators, and teaching tools for a society sorely lacking in direction. It includes depictions of the Minotaur, the half-man, half-bull imprisoned in a labyrinth, and the Medusa, who turned people to stone with her gaze and lost her head to the sword of Perseus.
“We wanted to say that we understand that we are in a very, very bad situation and probably it’s our fault for a great deal of it,” said designer Paris Mexis. “But within this country, there are creative people, productive people who still want growth, who still want Europe, who still want to be part of everybody else.”
Greek myths are the cultural property of Europe, the West and the world, immortalized in high art as well as cartoons and movie depictions such as “Clash of the Titans.” Greeks are rueful at how the legacy of their ancient statesmen and philosophers stacks up against their reduced circumstances. But mostly they don’t cite old myths, possibly based on kernels of truth, that helped people make sense of chaotic times.
Source: AP