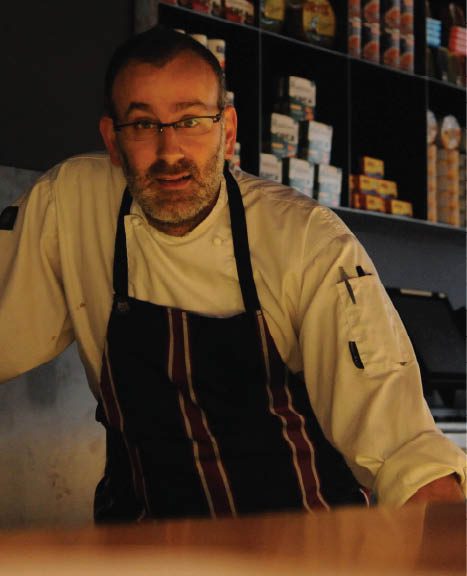 Melburnians are in for a real treat with this latest venture by Sydney Greek Australian restaurateur Stan Sarris and head chef Vas Donoudis at Shed 5. Along the banks of the iconic Yarra River, the South Wharf promenade is becoming a foodies paradise and Shed 5 – housed in a lovingly restored heritage cargo shed – is the new kid on the block making waves.
Shed 5 is a restaurant that can suit any desire a diner could hope for. From a simple glass of wine to while the day away whilst taking in the views, to sitting down to enjoy three to four courses, or taking a welcome seat at the bar and watch the chefs work away at the wood oven; it’s a place to meet the needs of every style of diner.
Stan Sarris is no stranger to creating culinary wonders. He became a household name after he ran Banc in Sydney – one of the first Australian restaurants to employ a sommelier, which has now become common place in restaurants, to create exuberant wine lists for all to sample. Then there was his work with the GPO development in Martin Place that spawned half a dozen restaurants and a plethora of well known chefs. So in a case of the ‘right place at the right time’, Vas knew that when he contacted him for the Shed 5 project, there was no way he could refuse an offer to not only work with someone so adept to the hospitality industry, but the chance to work with someone also of Greek background. This allows Vas as the head chef to get back to his roots.
Vas is the first to admit there were no good Greek restaurants around when he began his apprenticeship. Instead, his culinary adventure commenced at Carmine’s – a one hat Italian restaurant on Toorak Road in Melbourne. After moving around to other Mediterranean and Italian eateries, he jetsetted to Europe and worked in London and Greece for the 2004 Olympic Games. He then cheffed at the iconic St Kilda restaurant Cicciolina for three years, before moving to Sydney for a time. Vas came back to Melbourne and did a year and a half at Church Street Enoteca. With a strong background in creating succulent Italian based dishes, it was more than tempting for this chef to get creative and complete dishes with a subtle Greek twist.
Not one to be pigeon-holed, Vas is loathe to call the restaurant Greek, mainly because the produce from country-to-country vary greatly and there is no way to reproduce seafood dishes for example. But what’s exciting for this chef – and what keeps him and his diners on their toes – is the ability to recreate classic dishes using fresh produce from Australia.
“That’s the exciting thing,” proclaims the chef, “that you can create your own kind of cuisine. It’s my heritage, it’s the bosses heritage and it’s something that we want to continue with and I want to bring those flavours back into fruition.”
Vas uses the example of the slow braised lamb neck that is cooked for twelve hours in the wood oven that literally melts in your mouth. He serves this dish with a date, caper and pine nut salad on the side, but it’s what’s underneath that gives it a Greek twist. He has created a cauliflower skordalia to accompany the meal, using local produce and his Greek heritage in an imaginative fashion.
The desserts showcase where dining in Melbourne has to go – a composition constructed by a skilled chef with the ability to not succumb to the constraints of one cuisine, offering diners truly unique flavour sensations.
“I have a pudding we cook in the wood fire oven made with olive oil, pistachios and a honey syrup, so they are things that are really popular in Greek cooking,” he tells Neos Kosmos.
There’s a goat’s milk panna cotta – a typically Italian dish, but served with baklava crumbs and a Greek coffee sorbet giving it an added element of Greek flavours, which create a synergy that is fast becoming Australian food.
“It’s probably the most honest food I have done as a head chef,” confesses the chef.
“These kind of flavours, and the style of food is something you can eat at home but with the training of the chefs we have here, and my background, with the finesse and standard, and quality of the produce is something that you can’t recreate at home – they all come out in the final product.”
Shed 5 has a relaxed atmosphere, no pretension but the quality and professionalism is of high standard. The customers are made to feel at home but all the while, receiving the best in service and a great dining experience.
The ethos is pretty much anything goes for how you want your dining experience to be, but to always offer that consistent high standard of hospitality.
“The climate of hospitality in Australia at the moment is that people are preferring this kind of food,” explains Vas. “You need to offer foods that are a bit more simple but again the quality has to be there as Melbourne’s dining scene is so fierce.”
And one of the distinguishing features of Shed 5 has to be the wood oven. Fired with gas, the wood fire oven has red gum wood added to it to impart a flavour to the ingredients whilst they are cooking. And on any given night, there are one or two chefs on the oven giving diners a chance to sit and watch them busily work their culinary magic.
But all in all, Shed 5 needs to be experienced to be understood and Vas’ culinary creations need to be explored in more than one visit.
Shed 5 is located at 37 South Wharf Promenade, South Wharf Melbourne and is open Tuesday through to Sunday. For bookings you can contact (03) 9686 1122 and for more information visit www.shed5.com.au