84-year-old yiayia teaches her grandson how to cook everything Greek! Pastitsio, lamb frikase, stuffed tomatoes (gemista), spanakopita (spinach pie) and dolmades (stuffed vine leaves) are just a small sample of the many Greek delicacies that 27-year-old Jake (Kiriakos) has already mastered in the kitchen since he started cooking with his 84-year-old yiayia Despina Kapiris about a year and a half ago.

Jake’s decision to dedicate his spare time and efforts in learning how to cook Greek traditional food came after the young professional moved out of home for work.

“In 2017 I spent some time in New York and despite my successes in the corporate world and the excitement of living in a fast-paced city, I got caught up in, what on reflection was, an unhealthy lifestyle, that the majority of the time involved consuming take-away processed food that was affecting my physical and mental health, leaving me feeling fatigued and stressed,” said Jake, who then started researching healthy food options and diets in order to adopt a healthier lifestyle and improve the way he was feeling.

Fast forward a few months and all of Jake’s questions were answered when he found himself on his mother’s island, Ikaria, for his cousin’s wedding.

The fresh produce, the locals’ attitude towards life and the infamous ‘living in the moment’ philosophy combined with the overall relaxed atmosphere on the island, helped Jake find new respect and appreciation about the importance of his Greek heritage and culture.

“As soon as I got to Ikaria it felt like home. It finally all made sense. I actually got it,” says the 27-year-old who realised that instead of researching, all he needed to do was go back home and ask the one person that he thought held the answer to a healthy happy life. 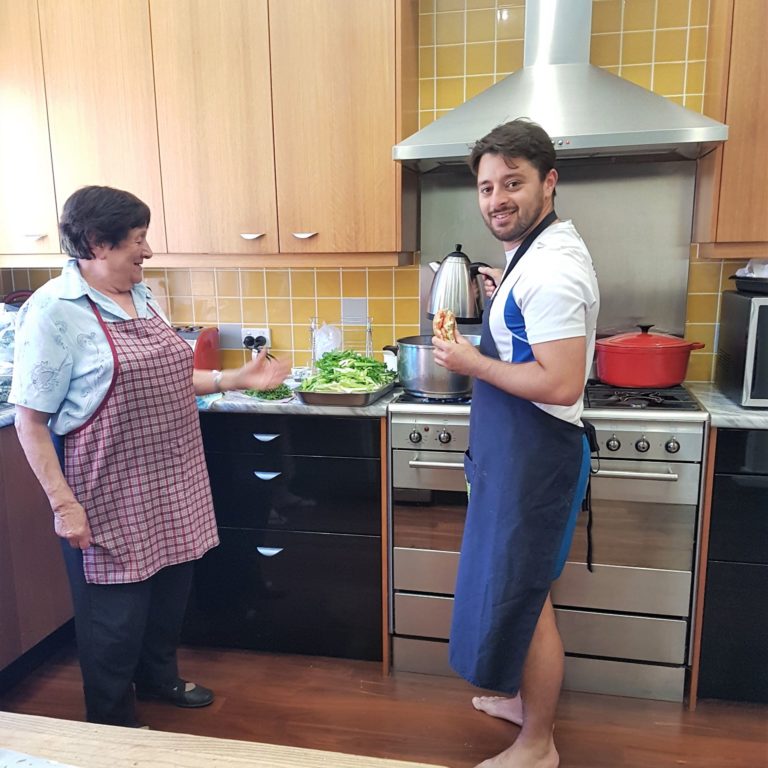 “I believe my grandson drank the Ikarian wine and fell in love with Greece,” said yiayia Despina who migrated to Australia in 1951, age 16, and is one of the first Greek migrant women in SA to have owned and operated a restaurant in Adelaide.

For Despina, cooking and sharing food with others has always been the best way to display her love and bring people and families together.

“That’s how I express my love and affection towards everybody, especially my three children, my eight grandchildren and my three great grandchildren,” says the tireless yiayia, admitting that she couldn’t hold back the tears when her grandson announced to her that he was keen to be introduced to her art of Greek cooking.

Interestingly, although Jake pretty much grew up in the family’s restaurant, where he used to watch Despina cook, he never picked up any cooking skills.

“I just didn’t pay any attention to her when cooking and I think that this is actually one of my generation’s biggest downfalls. We are highly educated but we don’t pay attention to those who actually know things we don’t,” says Jake.

Despina and her beloved grandson discuss recipe ideas on the phone on a weekly basis.

Then they conduct one cooking session a month in Adelaide. Once they both agree on the menu, yiayia Despina sources most of the ingredients from her organic garden.

The day starts at 9am, with a cup of Greek coffee, breakfast and a long chat.

Then the two of them head into the kitchen for a five-hour cooking session.

“It gives me purpose to be able to teach him something he will always remember me by,” says yiayia Despina.

“It is more like a mission for me to try keep up with my yiayia, who doesn’t follow any recipes but just goes on with her cooking, drawing inspiration simply from her years of experience,” says Jake who is now in the process of putting together a recipe book so that all of Despina’s grandchildren and great grandchildren can enjoy as a keepsake from their beloved grandmother.

“For me, yiayia’s cooking is pure medicine that we all need to ensure we savour. We simply can’t afford to lose all this knowledge,” says Jake who in the same breath loves nothing more than watching his grandmother’s face lit up when they start cooking.

Once the food is ready, the whole family is invited for a tasting. 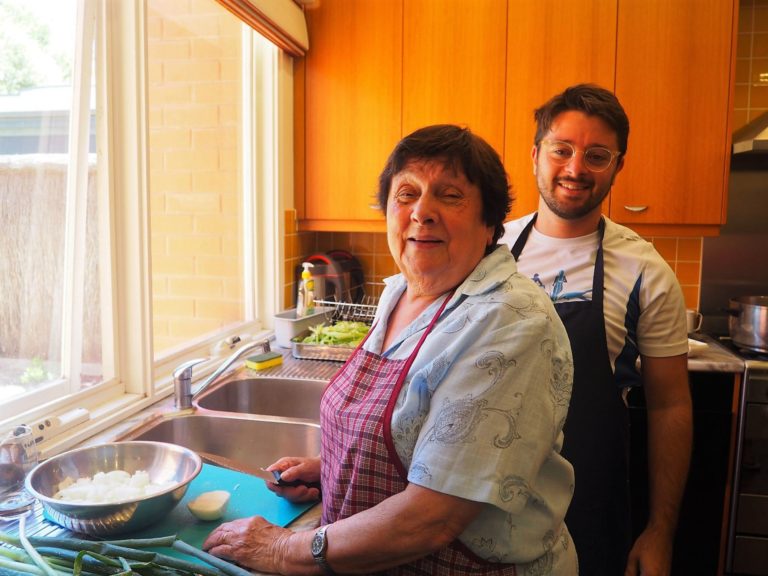 “The best thing about cooking with yiayia is that we cook up a storm. Her recipes feed twenty people at a time and no matter what we all tell her, she refuses to cook for less. I guess that says a lot about her beautiful kind heart,” Jake said.

“My mother lives for these moments where we all gather around the table to taste her food and spend some quality time as a family. She makes it her mission to please us all by cooking everyone’s favourite dishes,” said Georgie Kantilaftas, who is Jake’s mother and Despina’s daughter.

Despina’s family has always been very close, although there is certainly a special bond between Jake and his yiayia.

“My grandson has grown up to be a fine young man. I am so proud of him. He is intelligent, well-travelled and more educated than I ever was, so really, all I can do for him these days is guide him and teach him how to cook authentic Greek food that in the years to come he can enjoy with his family and friends, even if I am not around.

“For me that is the greatest gift of all,” concludes yiayia Despina.