Immigrants are not welcome worldwide, and Greece tops the list

At a time when international mobility is hitting record highs, few countries around the world have stated that they want more immigration.

The Pew Research Centre, a non-partisan fact tank, surveyed 27 nations in spring 2018 in a study that found that 45 per cent of citizens wanted fewer or no immigrants to be allowed in their country, 36 per cent wanted the same amount and only 14 per cent on average  wanted more.

In Greece, more than eight out of 10 respondents said they wanted fewer or no immigration with 82 per cent opposed to more immigrants. This was followed by Hungary (72 per cent), Italy (71 per cent) and Germany (58 per cent).

Outside Europe, opposition was just as high, with the countries with the largest majorities of people opposed to immigrants being Israel (73 per cent), Russia (67 per cent), South Africa (65 per cent) and Argentina (61 per cent).

Countries where foreign-born immigrants made up the largest shares of national populations were Australia (29 per cent), Israel (24 per cent), Canada (22 per cent), Sweden (18 per cent) and the United States (14 per cent). 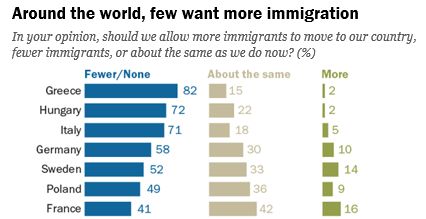 Outmigration also viewed as a problem

While immigration was considered a problem, people leaving their countries for a better life abroad was also negatively viewed. Greece and Spain, countries that have experienced a brain drain, viewed the departure of citizens from their countries in recent years as a very or moderately big problem at 89 per cent and 88 per cent respectively.

The same view was not held by nationals of countries with large foreign-born populations. In the United States, only 38 per cent saw outmigration for jobs abroad as a problem.