Turkey’s President Recep Tayyip Erdogan condemned the attack on two mosques in Christchurch, New Zealand, on Friday. He said that the attacks indicated that there is a growing hostility towards Islam.

Mr Erdogan was particularly concerned that the Australian gunman Brenton Harrison Tarrant, 28, had published a 74-page manifesto online, titled “The Great Replacement”. The document is extensive and consists of a long rant about white genocide and lists numerous goals that need to be achieved.

The document suggests that the gunman had an obsession with uprisings against Islam and claims that he had “brief contact” with Norwegian attacker Anders Behring Breivik who gave his “blessing” for the attack.

Structured as a long list of Q&As, the manifesto also has a section that refers to Turkey and ridding Hagia Sophia in Istanbul of its minarets.

Hagia Sophia church had been used as a mosque during the Ottoman empire before being converted to the museum it is today.

“My brothers, he called Istanbul ‘Constantinople’! He threatened to turn Hagia Sophia into a church,” Mr Erdogan said.

The manifesto calls on people to murder the ‘enemies’ of European nations and describes Mr Erdogan as “the leader of the largest Islamist organisation in Europe”.

The writer threatens to kill Turks living on the European side of Turkey and elsewhere. He identifies the “east side of the Bosporus” as the area where Turks would be allowed to live peacefully.

“We are coming for Constantinople and we will destroy every mosque and minaret in the city. The Hagia Sophia will be free of minarets and Constantinople will be rightfully christian [sic] owned once more,” the text states.

Photos of the rifles show the word ‘Turkofagos’ (‘Turkeater’) painted in white, which was the name which revolutionary figure Nikitas Stamatelopoulos was known by during the Greek War of Independence. The rifles also had other names of people who fought against the Ottomans. 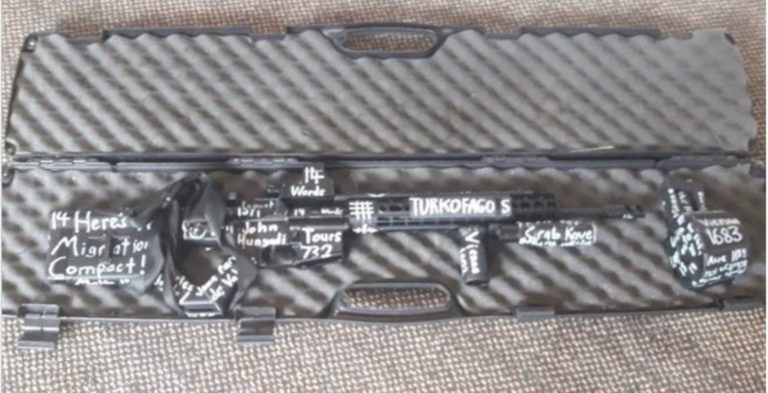 Tarrant also visited Turkey at least twice – in March and September – and spent extensive periods of time in the country, a senior Turkish official revealed.