YIAYIA RECIPE SERIES: A dish that warms the heart

Author Stella Stamatakis shares her love of cooking, and one of her most cherished recipes for avgolemono soup 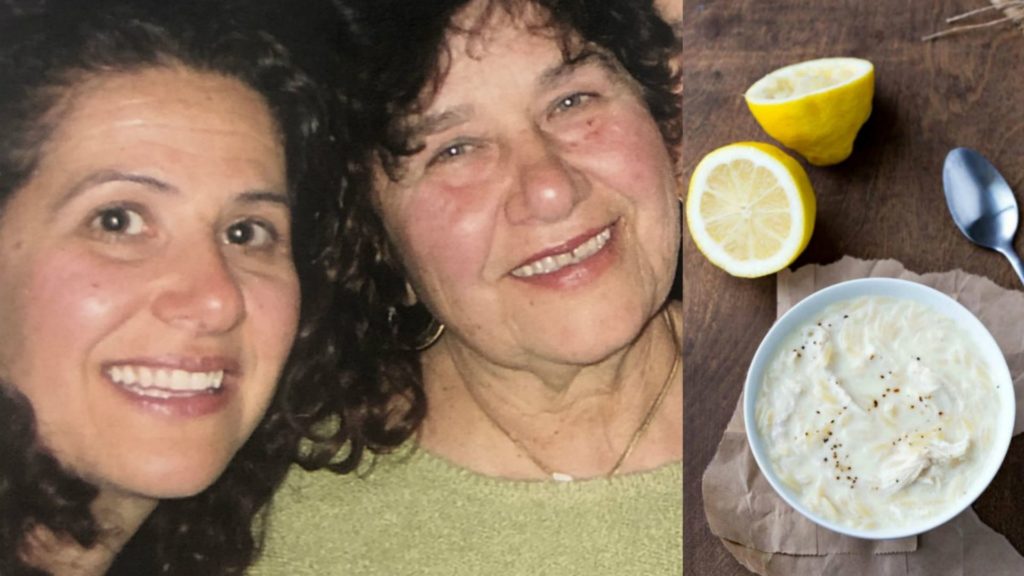 When author Stella Stamatakis was asked to choose a cherished recipe to share, it wasn’t hard to pick.

“My mother’s avgolemono (egg and lemon) soup; it’s an emotional choice for me,” she explains. “Something that is meaningful, that she makes for her grandchildren happily.”

The dish has developed into somewhat of a family custom, that signifies reunion. When yiayia Eleni touches down in Melbourne from Adelaide, even in the summer, the first thing that goes into the pot is a chicken.

For Stella, it’s a special experience to have her mother cook for her children the recipes she herself ate growing up; one she has documented in her recently released children’s book What’s a yiayia?

“Without sounding corny, it’s a warm and fuzzy feeling; it makes me feel happy, secure, safe. It’s nice to see that, that tradition is being passed down of that love of good food, and it’s a nurturing feeling actually. I just see my mum nurturing her grandchildren and it’s just beautiful. I actually think she loves my children more that she loves me; I think all grandparents do,” she laughs. But avgolemono soup wasn’t a staple when Eleni was growing up in Greece.

Hailing from a village in Rhodes, the diet consumed was largely vegetarian, with meat eaten on special occasions.

While Stella herself is a true foodie, that wasn’t always the case. As was common in Greek households in the ’60s and ’70s, Greek foods were the staples, and it was only once she moved out of home and later lived abroad in China with her husband that her palette developed, and with it a love of cooking.

“I love going to farmer’s markets, I love sustainable food, really good quality. I’d rather buy a really nice small piece of expensive meat, good free-range chicken, fabulous tomatoes. My husband’s Italian, so when I was in Italy I loved the gorgeous tomatoes – you can smell the sunshine in it,” Stella explains.

“And I actually find cooking relaxing, so for me, I don’t go for a run, I love cooking and I get a lot of pleasure and it makes me feel good when people enjoy my meal; I like feeding people.”

It is this generosity that she attributes to her Greek heritage, one that sees her sending packed lunches with her daughter Ellie to uni for her friends living away from home.

“I remember when I was young and I’d go to a friend’s house and the first question my mum would ask me, and I thought it was weird at the time, but I get it now, is ‘did they give you something to eat?’ For a Greek mum that was a big thing, ‘oh my god, my child is going to starve for two hours not having had something to eat!'” she laughs.

“My children are older now but even now when their friends come over after a party, I’ll always have something.”

While Stella has a deep love for preparing food, for her mother Eleni it is a different story, having been forced to learn from a very young age the practicalities of the skill.

At the age of four, Eleni lost her mother, and so was assigned the role of taking care of her father and three brothers, mentored by her aunties and grandmothers.

“So cooking wasn’t a joy for her; it was a chore. But cooking for her grandchildren, well that’s a pleasure.”

With her mother now aged 78, Stella says she and her sisters are more mindful than ever about recording and refining the family recipes that they love, much like avgolemono soup.

“It’s the one dish that all her grandchildren want her to make because my sisters and I cannot replicate it exactly the same as my mum’s. My niece in fact told my sister recently, that her version wasn’t good enough and that she has to have a few more lessons with yiayia … kids are brutally honest if something doesn’t taste the same!”

Stella has generously shared her mother Eleni’s recipe for you to try at home; perfect for the approaching cooler months, or to end the Lenten fast.

Method:
1. Place chicken in saucepan, add water.
2. Bring to a rapid boil then turn it to a simmer, constantly skimming the water.
3. Cook for at least an hour-and-a-half on simmer. You may need to top up water. Continue skimming the stock to prevent it becoming cloudy.
4. Remove chicken from the pan, allow to cool before cutting up all the meat into small pieces.
5. While chicken is cooling, add rice to the stock (should have at least 1 1/2 litres), stir occasionally to prevent it from sticking together. Add the chicken back to the stock to continue cooking.
6. Beat egg whites until they peak, with an old fashioned hand beater (I don’t know why but this works the best).
7. Add yolks one at a time. beating until each one is fully incorporated.
8. Now add the lemon juice, reserving 1/3 of it to adjust to your taste at the end.
9. You need to be quick for the next step! Add a ladle of the hot stock to the egg mixture whilst constantly stirring. The mixture will curdle if you’re too slow.
10. Now pour the egg lemon mixture over your simmering soup, adjust lemon to your personal preference.
11. Serve and enjoy, delicious with freshly cracked pepper.