Pontian parade and March mayhem rolled into one 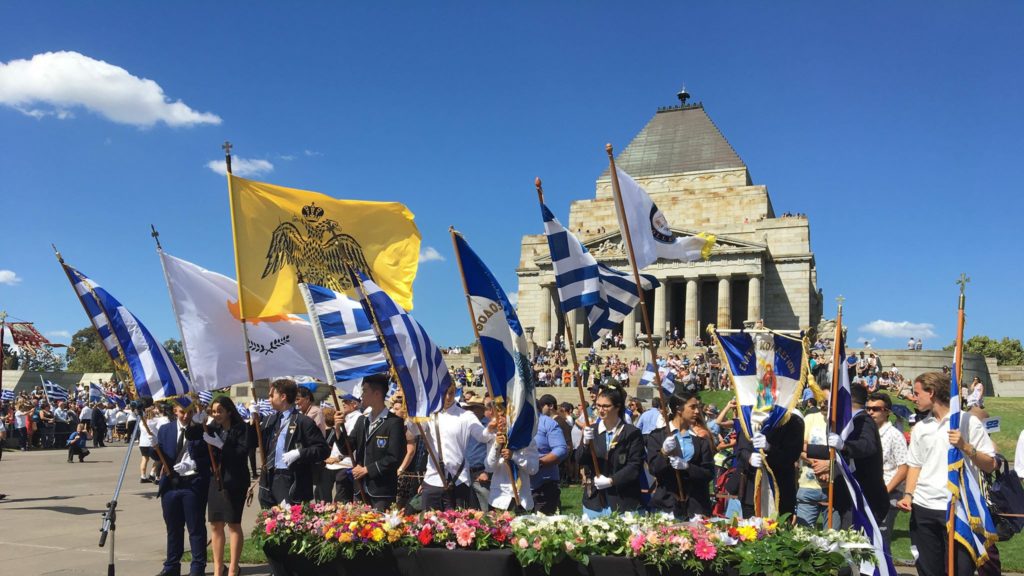 Like the revolutionaries of Greek independence, Pontians survived persecution under the Turkish yoke, managed to show bravery and gave future generations lessons on the value of Freedom. For this reason it was fitting to dedicate the 2019 Greek Independence Day parade in Melbourne to the centenary of the Pontian Genocide.

Freedom, however, is a volatile thing. As Cretan author Nikos Kazantzakis said, “A man needs a little madness, or else… he never dares cut the rope and be free.”
And it didn’t take long for the rope to be cut, and the madness to be unleashed.

In this case, it was the presence of Greek Deputy Parliamentary Speaker George Varemenos that was the catalyst for the dedication to the Pontian Genocide to turn into a Pontian joke.

A bit of booing upon mention of Mr Varemenos’ name, the singing of “Makedonia Xakousti” when the Thessaloniki group Lefkos Pyrgos marched by and the chanting of “Ellas Makedonia” by another group seemed relatively tame, lulling us into a false sense of security that the real meaning of the day would more or less prevail after all.

And for a while, it seemed as though the day would unfold in an almost civilised fashion and that people would respect the smiling children happily waving their blue and white flags while getting in touch with their Greek roots. However after the 77th group marched by, a theatre of the absurd unfolded.

The same doting grandparents fawning over the little evzones shuffling along and admiring their granddaughters with chitons draped over their shoulders, suddenly metamorphosized into a different type of yiayia – worst even than the menacing one we remember with the koutala (wooden spoon). These elderly people along with some muscular body builder types with tight t-shirts gathered together yelling – “Traitor”, “Shame”, “Bend on all fours re!”

Beside me, a silver-haired lady holding up her iPhone, hissed, “Go away! We don’t want you here!”

Without missing a beat she turned to me, sweetly smiling. “Am I recording this?”

I looked at her phone and pressed the play button.

“Bless you, my child,” she said. “Do you know which one Mr Varemenos is? Did the coward show up?”

I pointed him out so she could be more focused in her outrage. Obviously, unable to zoom in, she just walked as close as she could to his face before being gently ushered back by a man from the committee. “Please madam, go back!”

“You’re sold out like they are,” she said to him. “You’re a SYRIZA voter!”

At this point, it must have been decided to send all the pollies to lay wreaths together rather than one by one. But that did not prevent an escalation in the booing.

Not even Bishop Iakovos’ prayer for the victims of the Pontian Genocide in front of the Eternal Flame could stop the display of cringe-worthy behaviour even though a large number of the hissers looked like avid church-goers under normal circumstances.

And just when you thought that things couldn’t get stranger, there was the loud rumble and roar. It wasn’t thunder. It wasn’t an explosion, though some of us were a bit jumpy after the Christchurch incident just a week earlier.

It was nothing more than the Manasis dance troupe’s marching drums heard from the distance as the 78th of the 79th organisations in the parade made their appearances ten minutes after it had ended.

The idea had been for the Manasis students to march with their schools and then rush back in line to parade again in a special choreography created by the dance troupe specifically for the Independence Day parade that coincided with the group’s 40th anniversary. It would have been an interesting zig-zaggy appearance with the band on one side as the main body of the group walked around them.

But a lady from the committee had told Mr Dimosthenis Manasis to stay put and not move from his spot way back down in the line until someone came to collect him and his 500 students. And they waited, and waited, and waited…

Behind them the scouts were getting fidgety. In front of them, all the other organisations had already disappeared. And his own students had begun to sweat in their long-sleeved costumes.

Not knowing what to do, and realising that he had to somehow get the students to their parents waiting at the Shrine, Mr Manasis turned to his troupe, and said,

They were stopped on the way, being told the march had long-since ended.

But for them, it had just begun. And they soldiered on, with their choreography performed to precision until Mr Manasis saw the smoke of the Eternal Flame rising to the sky and caught a glimpse of Bishop Iakovos praying from the corner of his eye.

That’s when he told the troupe to just walk quickly by, forget the parade, and go to their parents waiting behind the Shrine. But the drummers at the front continued with the beat. Drowning out the hisses and hymns and all manner of tattered tributes that were supposed to have been bestowed upon the Pontians, who were heavily persecuted by the Turks – and now, this.

In Greek jokes, Pontians are something like the Irish, mocked for some unknown reason.

I suddenly thought to myself, “I guess you could call this a true Pontian Parade.”

I grinned at my own weak joke. The lady beside me noticed.

“Are you laughing at Varemenos?” she asked smuggly. “He looks like a wet cat!’

A Pontian Greek scientist was conducting experiments with a frog. He successively cut off one frog’s leg after another and asked the frog to jump.

The frog, obviously, could not. And so the Pontian scientist came to the conclusion that after cutting off four legs, the frog becomes deaf.

Later in the week, Neos Kosmos came under attack for  trying to give a platform to those who stated that it is fine to disagree with the Prespes Agreement but there’s a time and a place. But as the Greek saying goes – Στου κουφού την πόρτα, όσο θες βρόντα – or rather, it fell on deaf ears.