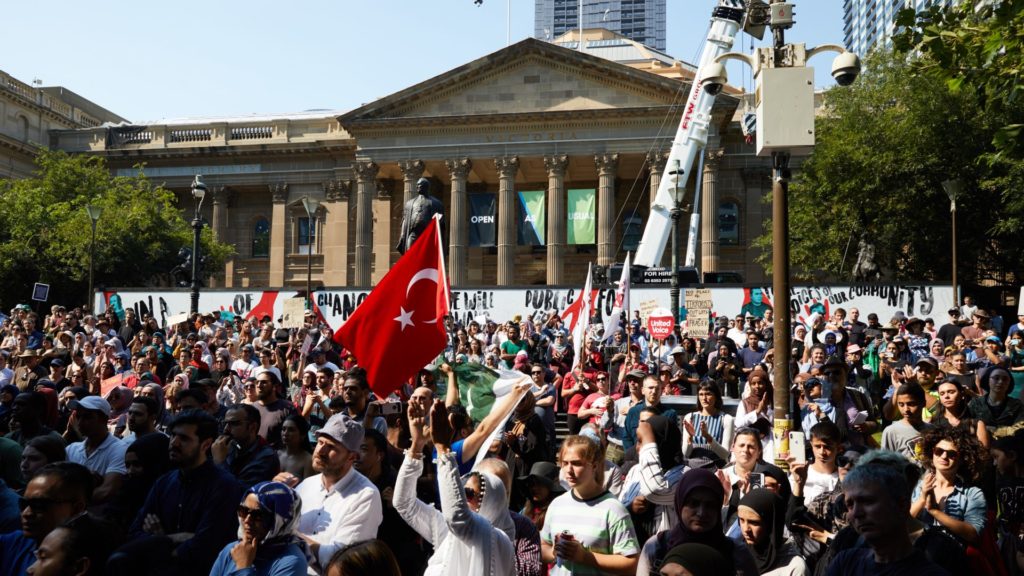 I went with my family to the Preston Mosque the Sunday, two days after the slaughter of 50 praying people and wounding of another 50 by a Nazi in Christchurch, New Zealand. There, I met my friend and his family, recent arrivals from Sudan. Our sons play in the same soccer team. We broke down as men, on the prayer carpet. I find it hard not to cry as I write.

Since the massacre, I’ve expressed my sorrow, as well as feelings of rage, to my Muslim friends and colleagues.

At the Mosque, the Imam said that eight points of blood were on the carpet after they were slain. The people were praying. The eight points represent two feet, two knees, two hands, the forehead and nose – all touching the carpet.

The mosque, church, temple, a library, university and school are places of reflection, learning and communion.

Fascism rained death in that Christchurch Mosque. This extreme form of identity politics, based on perceived injustices of the past or present, longs for a dystopian fantasy of purity, a pure race of Aryans, a pure religion of Christianity, or Islam, and so forth.

It seeks to ‘cleanse’ society from those considered impure, be they Jews, Roma, Muslims, Yazidis, Hutu, Copts… the list is long depending on where and when in the history of the 20th century.

Australia, a multicultural nation, had kept a check on the rise of notions of superiority since the birth of the Multicultural Policy. Diversity was celebrated, difference respected, all cultures and histories were important.

Yet, the former prime minister John Howard ushered a new enthusiasm for Jingoism and opened the door to ethnocentricity, by undermining a reasonable and liberal policy, and most importantly rhetoric of multiculturalism. Unlike the broad notion of inclusion multiculturalism provided a space for everyone even the Anglo-Celtic majority.

As a bipartisan policy, it strengthened the centre and allowed both conservative and progressive views to balance.

John Howard’s distrust of multiculturalism was clear since the 1980s. He when took on historian Geoffrey Blainey’s view of limiting Asian migration.

Often the then leader of our nation would openly and publicly express concern over foreign language shop signs and ‘understood’ the discomfort some Australians have with multiculturalism. Something no leader had done since the late 1960s. Some media since 1996 has provided regular platforms for the likes of One Nation. Alan Jones 2GB shock jock described Lebanese Muslims in 2005 as “vermin” who “rape and pillage a nation that’s taken them in”. This is not some twisted Nazi loner in some outer suburb this one of kings of radio.

Over seventy millions died because of fascism in WWII. Noxious ideas that would have been scorned at before 1996, and are repugnant to the overwhelmingly number of Australians still, have had a podium for over twenty-years now. Multiculturalism from 1972 to 1996 was a bulwark against the rise of culture wars and identity politics.

Our multicultural policy was founded on the leadership of Holt, ignited by Whitlam, led by Fraser, and solidified by Hawke and Keating. Premiers such as, Dunstan, Kennett, and Greiner also participated in a major way in its defence and extension.

Howard’s unforgiving reaction to refugees and the ALP’s acquiescence since then have damaged the centre. Fear of the refugees, Muslims, Africans and so on, became a smokescreen for the largest flow of migration into Australia since WWII under Howard’s prime ministership the irony of that cant be ignored. Social media has made things worse by providing a cover to ISIS, Nazis and other fascist ideologies that would have had a tough time being quickly disseminated in the past.

The Nazi terrorist’s proclamation about “taking back Constantinople” was obscene, especially as the Christian Crusaders first sacked Constantinople in 1204. John Julius Norwich an authority on the Byzantium writes, “By the sack of Constantinople, Western civilization suffered a loss greater than the burning of the library of Alexandria in the fourth century or the sack of Rome in the fifth – perhaps the most catastrophic single loss in all history.”

When the Ottomans colonised us in 1453, the Greeks had a refrain, “Better the Pasha’s fez than the Pope’s cassock”.
Fascism aids fascism. Turkey’s President Tayyip Erdogan’s reaction to the massacre, that Australians visiting Gallipoli would “return in coffins like their grandparents” if they came with anti-Muslim sentiment, is ample evidence.

Aristotle (384 – 322 BCE) said, “If there is something we do for it’s own sake, it must be the overall good.” His notion of ‘good’ has been incorporated in Judaism, Christianly and Islam, as has his notion that every action has intrinsic value. Clearly the atmospherics and politics allowed to breath so easily since 1996 militate against the ‘overall good’.

Aristotle philosophical and scientific works were lost to the Europeans after the collapse of Rome. It was Arab scholars in the Caliphates that translated them, as they incorporated vast amounts philosophy and science from across their Empires. If Aristotle is alive it is in part because of the Caliphates.

We must try to do what is ‘good’. Political leaders need to reaffirm a bipartisan position on Multiculturalism and seek to unify people. A first step would be to end our shameful treatment of refugees.

We then must reinvest in a bipartisan multicultural policy, and avoid the polemics of identity to hijack multiculturalism. Government needs to be vigilant in investigating right wing extremism, they are dangerous, we have seen the in Norway, in the US, and now in New Zealand.

Finally, we must bring everyone along left and conservatives. Otherwise why did our brothers and sisters die last week?

Neos Kosmos welcomes robust dialogue on matters concerning the expats living in Greece and the Greek diaspora from around the world. The views and opinions expressed in letters to the editor or the opinion section of our website and newspaper are those of the authors and do not necessarily reflect the official position of the publisher. Send your opinions to editor@neoskosmos.com.au