Massacres, freedom and the Shrine of Remembrance

“I feel patriotism for Greece, its past and in particular its long lost lands,” writes reader Arthur Kokkinias 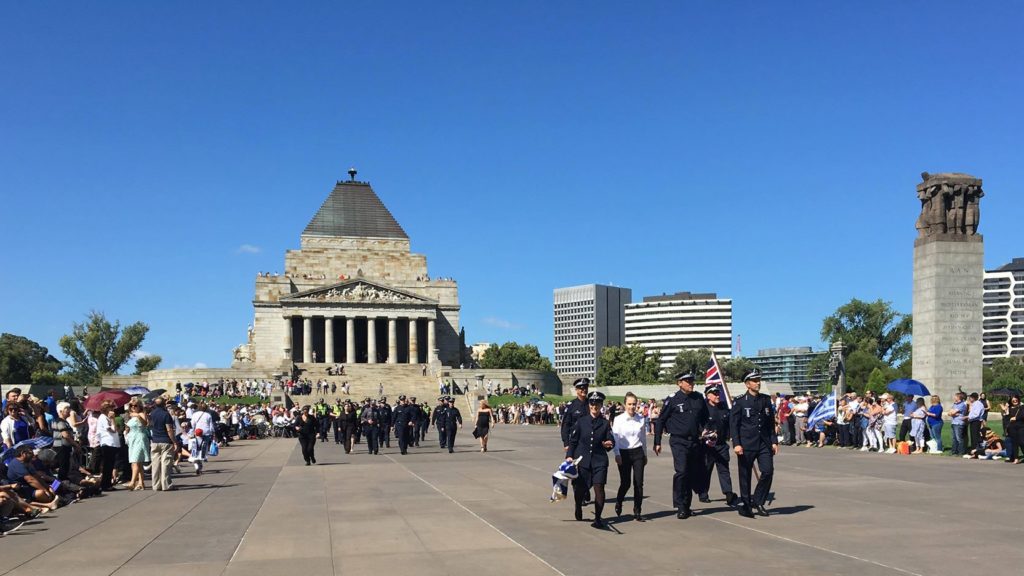 At Neos Kosmos, we are still receiving letters and opinion pieces from readers concerning the protest action taken at the Greek Independence Day parade in Melbourne on Sunday, 25 March. These letters are the opinions of readers and do not necessarily reflect the viewpoints of the editor and publisher of our newspaper. We welcome opinions from all sides of the political spectrum and will publish these as long as they are not defamatory and use civil language. To submit an opinion piece on any issue you’d like to give voice to, send an email to editor@neoskosmos.com.au. Please ensure that you attach your name and contact details. We also welcome photos and videos.

Over the last week since our celebrations of Greek Independence Day and the Feast of the Annunciation I have heard this song played over and over together with other traditional mainland Greek songs which evoke a sense of Greek pride. The tsamika and kalamatiana accompanied with clarinets are the mainstay of the celebration throughout Greece during this holiday. The songs are reminders of our glorious uprising against Turkish oppression. I feel patriotism for Greece, its past and in particular its long lost lands.

This particular traditional song almost certainly refers to the siege (and massacre) of Tripolitsa, modern day Tripoli, in the Peloponnese in 1821. Although the song is an older klephtic song, it has taken on the meaning of the “great” victory of this siege.

Growing up in the Greek educational system of the Antipodes I had only learnt of the horrific Ottoman Turkish massacres perpetrated against our forefathers and nothing of those perpetrated by our Greek forefathers who were uprising in the 1820s.

Tripoli was the Ottoman administrative capital of the Peloponnese. The population was in the majority Turkish, Albanian Muslim and Jewish. The Greek revolutionaries were spurred by the massacres against Greeks elsewhere that they had learnt of preceding this siege. Kolokotronis was the unofficial commander in chief. Maniots under the leadership of Mavromichalis also took part as did the Christian Arvanites.

The siege of the city lasted months and when the Greeks finally took the city the total population of the city (Muslim Turks and other Muslims as well as Jews and some Christians) were exterminated or enslaved. The fatalities were estimated to be 8000. Other estimates claim significantly higher casualties. The descriptions of the three day massacre are gruesome. Kolokotronis himself later wrote that that he was saddened by the slaughter. The historian W. Phillips wrote that there was torture of women and children and that Kolokotronis’s horse’s hooves, when entering the city, never touched the ground on account of the corpses underfoot.

There were multiple other massacres by the Greeks in the Peloponnese with upwards of 20,000 Muslims killed in total. The Peloponnese was finally free of Muslims after centuries of Ottoman rule. Victory and independence for Greece was tangible. Ελευθερία at long last! The end justifies the means? Perhaps. Perhaps not.

Almost certainly, why the subsequent Turkish massacres of Greek populations elsewhere in the Ottoman Empire was so brutal, was in response to the massacre of Tripolitsa. The Massacre of Chios a few months later in 1822 led to the slaughter of over 50,000 Greek civilians. A similar number was enslaved. The smaller number of survivors fled to other islands and abroad. Arguably the Massacre of Chios led to the general European outrage and sympathy that assisted in facilitating the independence of the modern Greek state.

I, like many Greek Australians, was saddened by the inappropriate demonstrations at Melbourne’s Shrine of Remembrance on the day of our march to commemorate the 25th March celebrations – our Greek National Day. The celebration of the beginning of our freedom. I couldn’t help but wonder, like Kolokotronis must have, about the unnecessary and thoughtless carnage that could occur when we do not act as civilised peoples.

The demonstrators will no doubt defend their actions. “Syriza and Tsipras have betrayed us. They have sold Macedonia. They are traitors. They are not Philhellenes. We need to protest”. But, was it the most appropriate setting to demonstrate? We are privileged to be able to march to honour Greek independence at the tomb of the unknown soldier and the war memorial for countless fallen Australians.The Shrine is a sacred site which is arguably not the appropriate setting for a demonstration against the Greek government no matter how justified we may feel. I felt embarrassment and sadness witnessing the events. Bishop Iakovos’s trisagio to the Greek fallen and to the victims of the Pontian genocide was inaudible as it was drowned out by the slogans and protests of a few. A justifiable protest or disrespectful behaviour?

READ MORE: An open letter to those who did not respect the Shrine of Remembrance

Is this the civilised Greek Australian society that we wish to portray to our wider Australian community? Unfortunately my mind turned to the massacres of Turks perpetrated by our forefathers. Were the Greek revolutionaries who slaughtered, raped, maimed and enslaved countless Muslims as blinded by this hatred of the “foreigner” and of the “enemy” as some of us are today?

We are fortunate to live in a paradise where we live freely, where we are not enslaved, where we can protest without fear and where we live in relative abundance. We need to respect this Antipodean land that treats us so well.

We certainly don’t need further massacres perpetrated by any groups or by individuals. We can learn from history.