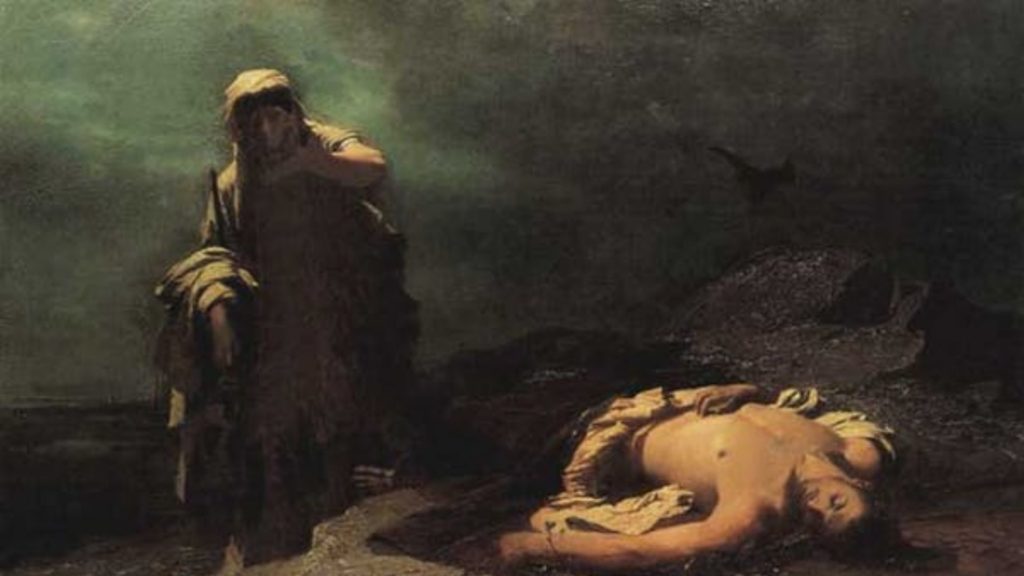 In a Greek tragedy written in the middle of the fifth century BC, three teenagers struggle with a question that could be asked now: What happens when a ruler declares that those who resist his dictates are enemies of the state, and that ruler has as many supporters as he has detractors?

The story of Sophocles’ Antigone and the accursed royal family of Thebes belongs to the mythical pre-history of Greece.

Greek tragedy portrays in broad strokes the cruelties that take place within families and cities, but keeps them in the safe distance of the mythical past. The mythical past provided a safe space to present contemporary problems without outright political affiliation.

The play, named after its young heroine, mirrors the state of America’s current disunion: Political and moral views are framed in terms of a fight between patriot and traitor, defenders of civic order and its enemies, and law and conscience.

The play begins only hours after the end of a civil war and is set in Thebes’ royal household.

Oedipus, the Greek king, is Antigone’s, Etocles’ and Polyneices’ father.

After Oedipus was banished from the city, Antigone’s two brothers, Eteocles and Polyneices, were meant to share the kingship. But Eteocles exiled Polyneices and made himself sole ruler. Before his death, Oedipus cursed his two sons, saying that they would die at each other’s hands.

Polyneices returned with a small band of warriors; Eteocles fought him with the city’s army. As their father said would happen, the brothers died at each other’s hands. Polyneices’ allies were driven off, leaving his corpse outside the city walls.

With both heirs to the throne dead, their uncle Creon declared himself king, as was his right.

READ MORE: Ancient Greek democracy was not as we know democracy to be today

Creon then makes a shocking decree: No one is to perform funeral rites for Polyneices, because he was a traitor. His body is to be left rotting in the sun and preyed upon by vultures and scavenging dogs. Anyone caught trying to bury him will be executed.

Refusing burial rites to traitors was not unheard of in Sophocles’ time; it was an accepted means of quashing sympathisers.

But not burying a relative was different.

Creon’s situation was out of the ordinary. As head of the family, he was obliged by religious custom to oversee the burial of his nephew. But in the larger civic context of the country he led, he could refuse those rites to a traitor. Creon chose to maintain civic order, as he alone saw fit.

We first see Antigone as she rushes to tell her sister Ismene the news. She is sure that Ismene will join her in disobeying the decree, for the gods are offended by a body unburied; without a proper burial, their brother’s spirit cannot enter the underworld. And, most of all, he is their brother, traitor or not, and it is their duty as his remaining family members to bury him.

Yet Ismene begs her not to defy their uncle Creon. We are just girls, she says. We can’t fight the decree. The dead will not judge us. We will die; what good will that do?

Antigone turns on her sister immediately and says, “You – go ahead and dishonour what the gods honour, if you think it’s best.”

Antigone tells Ismene that she hates her, and rushes offstage to carry out her plan: to go outside the city walls, where her brother’s body lies, and cover it with a few handfuls of dust. It’s the best she can do.

When Creon finds out what Antigone has done, he has her brought before him, and declares that she must die.

She is defiant and scornful. Her challenge to his authority only increases Creon’s resolve. When his son Haemon, Antigone’s fiancé, tries to reason with him, he refuses to listen.

Ismene, now remorseful, claims that she buried the body herself, to which Antigone responds with contempt.

In their solo crusades for justice, both Creon and Antigone ignore the grief of their loved ones.

Creon orders that Antigone be taken to a cave and left to starve; she is led away. He then receives word from a prophet that the gods will punish him for putting a living soul underground and keeping a dead body above ground.

Creon dismisses the prophecy, but the chorus of citizens convinces him to go save Antigone and bury Polyneices. He rushes to her tomb, too late. He finds two dead bodies there. Antigone has hung herself, and Creon’s son Haemon has fallen on his sword. When Creon’s wife hears the news of her son’s death, she too kills herself.

“Lead me away,” a stunned Creon says to the city elders. “I am worse than useless; I am impious.”

But his principles lead to the deaths of many, including his son, Haemon, who was not a rebel, only a young man in love.

Haemon was a moderate, who, with Ismene, tried to persuade Antigone and Creon to drop their intransigence. Ultimately, however, they too were dragged over the edge into chaos and violence. Even Haemon’s mother, who never appears on stage, becomes a victim.

Every character in the play was forced to enter the arena of good versus evil, either because they loved each other, or they loved their own convictions.

It is impossible for any character to remain in the middle – they are forced to the extremes, where death or grief are either chosen or thrust on them.

What can be learned from the tragedy of Antigone?

At least this: When fellow citizens become enemies, their bonds of friendship and family are weakened if not destroyed. When primary identity is reduced to “us” and “them,” the definition of justice narrows. It becomes simply what helps “us” and harms “them.”

When a leader urges citizens to identify his enemies as enemies of the state, what those citizens may end up having most in common with each other is anger, fear and mutual contempt.

And what of the Ismenes and Haemons of the world, those who try to dissuade others from rash actions and de-escalate tensions?

The historian Thucydides, Sophocles’ younger contemporary, observed that when a community is at war with itself, “moderates suffered most, because they were subject to attack by both factions.”

Sophocles offers another lesson in Antigone. Namely, that a single person in power, if he persuades or frightens enough people, can cause the suffering of innocents and the loss of institutions and customs on which civil order rely.

It is a lesson we have witnessed more than once, in living memory.

Elizabeth A. Bobrick is a visiting Scholar in Classical Studies at Wesleyan University. Her article has appeared the Conversation.