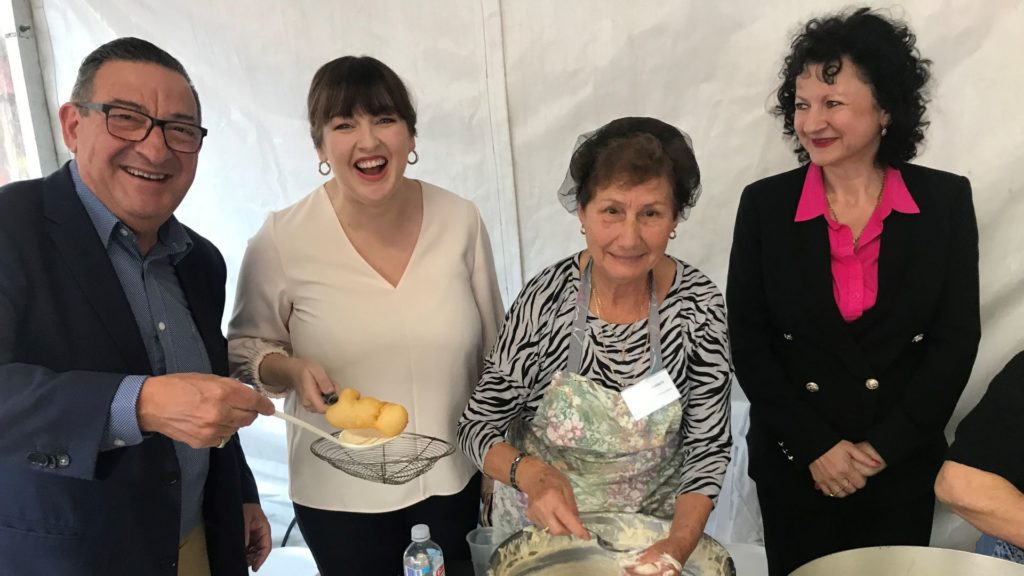 Steve Georganas, enjoying loukoumades with members of the Greek community.

With upcoming elections on the horizon, Greek Australian federal MP and candidate for Adelaide Steve Georganas appears calm in the eye of the storm; determined and focused to win his new federal seat of Adelaide.

Born in South Australia, Georganas’ working class parents arrived in the country from Arcadia and Kalamata in the 1950s. The values of the 59-year-old father of two have been shaped by his Greek upbringing as well as his career in policy advising and advocacy for workers’ rights.

With an even-keeled temperament and a knack for consensus-building, Georganas is a firm believer of democracy and an advocate for equality and human rights.

He credits his successful 15-year presence in federal politics to the work he does to ensure working families have access to quality education for their children and health care services for all.

Surprisingly, throughout his career, Georganas appears to have attained the unattainable in the broader Australian political arena: no scandals, no haters and no backlash.

“I am sure there are people out there that disagree with the policies and ideas we are suggesting, but I always make sure I listen and take on the feedback whilst treating every single person with respect. I do like to listen to what people and my parliamentary colleagues have to say because that’s the only way to learn. At the end of the day every single one of us has a story behind them and we, politicians, can learn a lot if we choose to listen,” Mr Georganas told Neos Kosmos.

Asked about how hard the shift from Hindmarsh to Adelaide has been for him, he told us that you can never be ‘confident’ in politics.

“There was a redistribution, so the boundaries were completely changed. I am coming from one of the most marginal seats in the country to a notional nine per cent seat for Labor in Adelaide. That doesn’t mean that it is a seat that you take for granted. I am still working just as hard doing everything that I have always done and that’s to represent the people of the electorate to the best of my ability. I have been out there conducting street corner meetings and speaking to people from the electorate so I can understand their problems and assist them going forward. There are around 14,000 Greeks in the electorate, but you can never ever be confident in politics. All you can do is work as hard as you can to make sure that we get the result that we require in the seat of Adelaide on the 18th May so that I can then have the views and concerns of our SA people relayed on in Canberra to the decision makers.”

In these tough financial times, particularly for South Australia, Mr Georganas said that the Labor Party’s policy solutions aim to help middle and low-class Australians deal with their economic struggles and inequities, identifying cost of living, unemployment, health and education as the major areas to focus on.

COST OF LIVING
“Everyone I speak to raises the issue of not being able to keep up with the cost of living. We know that we’ve got one of the lowest periods in the history of Australia of wage stagnation, but the cost of living is going up and I am hearing that from working class people,” said Mr Georganas.

“At the same time pensioners are struggling to pay their bills and their rent. That is the number one issue people are dealing with. We have seen for example a 70 per cent increase in electricity prices in the last six years even though we were told in 2013 that electricity would be cheaper under a liberal government, which has not happened. Electricity has gone up. And one of the reasons it has gone up so much is that there is no energy policy. We need a plan and structure in place so that we can have businesses investing in energy and more players in the market to bring prices down.”

UNEMPLOYMENT
“The submarines and space centre are expected to create more jobs in Adelaide. Normally, there is always a gravitation to the larger cities, but we need to ensure we have specialities in Adelaide to create more jobs and attract younger people. Also, we need to address (workforce) casualisation – in other words people that work as casuals for a long term, and therefore cannot borrow money from a bank to buy a house,” Mr Georganas said.

“The Labor party will legislate to ensure that the casualisation without a reason won’t be happening. We want people to have full-time jobs with a living wage.”

ECONOMY
“The economy might be doing okay in some parts but it’s the people that are being left behind and they are feeling the pinch. The multinationals, at the big end of town, secure record profits but what we see is that the middle and low wage income earners are not keeping up with the cost of living, which means they are not feeling any benefits in the economy. The government is saying they want to give $80 billion in tax cuts to the top end and hope that they will create jobs and do other things, that’s the argument for it, but we want to use that money for health and education and also restore penalty rates. If you give $30 to a middle or low-income earner, that money goes straight into the economy; there is a need for that money to pay bills, rent and mortgages,” he said, adding that according to the recent budget introduced by the current government, the liberal tax system is going to leave 3.6 million Australians that are paid less than $48,000 short-changed.

“We want to give those workers the tax cuts they deserve and, under Labor’s policy, 10 million Australians will get the same or bigger tax cut in the next parliament and we will deliver bigger cuts to low income earners and everyone earning up to $120,000. The people that will benefit under the current government are the multinationals, the banks and large businesses that pay no tax to Australia and we are saying ‘no we will not give this money to the big corporations’, we will give it to the ordinary Australians and services for young people and the aged.”

NEGATIVE GEARING
“People will still be able to have the tax breaks that they get from negative gearing, but when that changes, they will still be able to invest in negative gearing in new homes, apartments etc, which means more investment will go into the new structures, new houses which creates jobs and that will actually generate quite a bit of work and the economy as well. We have also said that the Labor party will ensure that there is a plan in place to build 100,000 new homes in Australia,” he said.

EDUCATION
“We will restore every single cut individually to every single school that’s been cut under this government and we know that it is about $190 million in SA alone. Some schools had cuts of up to two to three million dollars,” he said. “Every child deserves a decent education, every school should have the ability and the means to provide that education and so it will be a needs-based system to achieve the outcomes that are required.”

HEALTH
“We will fund hospitals. We have already made those announcements. The Medicare freeze is a real issue as currently the doctors are charging the gap now and people cant’s find a doctor that doesn’t charge the gap so we will take the Medicare freeze off so that doctors can bulk bill again and therefore people can afford to go to the doctor again.”

AGED CARE
“We are an ageing population, which means we have now many people who require the services, the aged care facilities or (other) services at home,” he said. “We have seen the packages for home care blown out -there is approximately 120,000 elderly people on the waiting list across Australia and that blows out by about 20,000 every three months. So it is getting harder and harder to stay home and people end up waiting for up to two years in some cases to receive a package. In the meantime, they deteriorate and end up in a hospital or an aged care home which wouldn’t happen if they could receive the aged care package which would service them much better. Our plan is to restore the money that the government took out again which I think it’s approximately $1.9 billion, out of aged care, which had its negative affect. There is also a massive waiting list of people who can’t get in the aged care facilities particularly.”

ENVIRONMENT
“Emissions are killing the environment and sea levels are rising, and those issues appear to be troubling our younger people and the general public. We have committed to have 50 per cent renewables, which will bring down emissions and again I think we need to look at our children’s future.”

SUPPORT TO THE GREEK COMMUNITY
Mr Georganas also believes that there are issues of great importance to the Greek Australian community of South Australia, which he addressed publicly two weeks ago when he announced a Labor pledge for a $3 million project in Adelaide towards ageing Greeks.

“Greek migrants have proudly called South Australia home for many decades and today nearly 40,000 people of Greek ancestry live in the State, but they are now ageing and there is a shortage of culturally and linguistically diverse aged care services. As I announced two weeks ago, a Shorten Labor Government will invest $3 million to work with the St George Orthodox Community and Parish and Saint Basil’s Aged Care to build an aged care facility in the inner western suburbs of Adelaide, the heart of the Greek Community,” he said.

“It is our duty to ensure that these people who have worked really hard all their lives making an invaluable contribution to the development and growth of South Australia in every way imaginable, now receive the care, the attention and the respect they deserve so that they can live a life of dignity. The facility will provide culturally appropriate aged care services to residents and provide a meeting place for regular events and functions for the resident’s families and the broader community. There will also be the option of day care where the elderly will have the option to spend the day and receive the care and services that they need giving their partner and family also some relief during the day.”