Dimitris Basis: ‘Concert with Newtown school is a career highlight’ 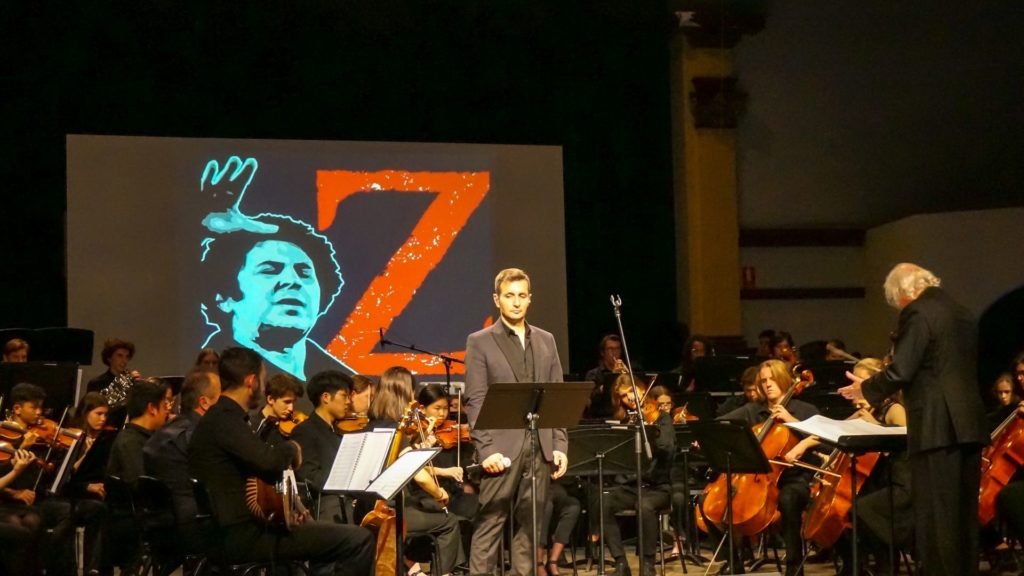 Stuttgart-born Greek singer Dimitris Basis and the Newtown High School of the Performing Arts Orchestra  collaborated in an historic concert, titled ‘Byzantium to Zorba’, on Wednesday in the framework of events of the annual Greek Festival of Sydney.

Speaking to Neos Kosmos after the final rehearsal for their sold-out performance, Basis and Emlyn Lewis-Jones, conductor and teacher at the Newtown school, both spoke of their joy for the project finally coming to fruition, among the first of its kind for a major Greek artist in Australia.

“I explained to the school committee that what we wanted to show was the history of Greek music,” Basis, speaking in Greek, said.

“These children, who are Australians, fell in love with Greek music and they played it in their school. That is an honour for us Greeks.”

Lewis-Jones, a long-time admirer of Basis explained how seeing the Greek musician in concert on Samos over a decade ago left a remarkable impression. “It was a large festival, crowds of people in the main square area and a large stage,” Lewis-Jones recollected, “Dimitri and his band came out and he started with a Byzantine chant.”

READ MORE: A Musical Odyssey brings the sounds of Greece to Australian shores

“From that point on, for two and a half hours, I was mesmerised.”

That exposure to Basis’ music was limited to attending concerts and purchasing CDs until one day last year, when Nia Karteris, Director of the Greek Festival and Committee Member Ula George arranged a meeting between the two.

“We went had coffee and we talked, we listened to some music from the ensembles we were rehearsing at the time,” Lewis-Jones said.

“Dimitri was pleased with them, so we decided to do a show.”

Karteris also spoke to Neos Kosmos and highlighted her delight on behalf of the Greek Festival that this ambitious concept had become a reality.

“It shows that the Greek Festival and Greek Community have no borders, and it gives us the opportunity to expand into the mainstream, especially in the education department,” Karteris said.

“It’s something that will open the floodgates to more projects.”

Both singer and conductor concurred that working together and with the school Orchestra was easy, particularly during the final three school days of rehearsals and despite language barriers.

“There was no difficulty in collaborating because music is a global language, and we musicians understand one another very easily,” Basis said.

And the singer was quick to mention “one moment where I sing Mikis Theodorakis’ An Thimitheis To Oneiro Mou alongside one of the students, with him in English and myself in Greek,” as one of his most memorable sections of the concert.

“I feel [Wednesday]’s event is among the most important moments of my career,” Basis said, “regardless of some major prior collaborations. This event is excellent.

“I don’t see it at all in terms of if I will benefit personally, but this exercise will certainly benefit Greek music.”