Walking off the beaten aisle: Kathi and Sam, a love story beyond ethnicity, religion and… food

In multicultural Australia, interracial weddings are commonplace. For certain communities – usually when the cultural and religious backgrounds are completely different – marrying outside family traditions and expectations can perplex things. Kathi and Sam’s wedding, however, merged two cultures and families who have been teaching each other patience and respect happily ever after.

Kathi, a Greek Orthodox woman born and raised in Australia, who loves her meat-based diet, never expected to fall in love with a Hindu man who is also an ethical vegan. And yet, despite differences, their union has been surprisingly easy to navigate.

The two met in 2014 while on a 12-week acting course they had both enrolled in. The chemistry was there from the get-go.

“Each time we had to pair up for a scene we would choose each other… it was so easy to be around each other,” Kathi tells Neos Kosmos.
“We became good friends, fell in love and got married exactly one year from the day we met.”

In what is surprising for most, Kathi explains that even though religion was the only main difference initially, it wasn’t the hardest to overcome.

“We were questioned about this a lot by family and friends, but, I think our differences made it easy for us to come together,” she goes on.

“I hadn’t even tasted Indian food when we met so it was exciting to learn about our different cultures. Everything was new with the both of us so it felt like an amazing adventure into the unknown.”

Kathi loved the beautiful saris and jewellery Indian women wore and Sam loved Greek music and dancing. The two always found something in common, the only real differences in their cultures were the types of spices they put in their food and the languages they spoke, everything else was very similar, she enthuses adding that people thought that one of them would have to convert to either Christianity or Hinduism.

“But it didn’t need to be like that,” Kathi stresses.

“Hindus believe in demigods but they believe they are created from one main God. In our house there is both the Gita (the Hindu bible) and the Christian bible, we respect each other’s beliefs and when we pray together we pray in God’s name. Sam reads the bible and will often call his mum and read to her; his family is very spiritual and open to our beliefs.”

At first they were both worried about how their parents would react, given that Sam is the only Indian in Kathi’s family and she is the only ‘white’ person in his.

“When Sam first met my parents he bowed down and touched their feet, this is how they show respect to their elders, that gesture literally took their breath away, because of that, my parents warmed to him instantly,” she says.

For Kathi, the first meeting with her beau’s parents took a different turn.

“Before we could even think about getting married we had to get a blessing from Sam’s parents but first they had to see if we were a good match astrologically!”
“This is a traditional ritual and once it was established we were a compatible match Sam’s parents began the wedding preparations.”

Yes, Kathi had a full-blown Indian wedding and everyone loved it. Especially her hardcore Greek family.

“We had a beautiful five day wedding in India in front of thousands of guests. My mum won’t stop talking about this experience. India was magical!”

“We personally never had a problem with our differences, however we still get a lot of looks from other Indian people,” Kathi admits that arranged marriages are still a customary tradition in the Indian culture which definitely makes people from Sam’s background curious to know the story behind their relationship.

Kathi, being the only non-Indian wife in Sam’s group of friends, has completely changed their perceptions of what a “white” wife is like.

“His friends love our Greek food and hospitality; we’ve shown them how similar our cultures are. Both cultures love family and food!”

Speaking of food, Kathi admits that Sam’s vegan diet was the main challenge in their union, rather than culture or religion.
Sam grew up in a Hindu household; his parents and grandparents ate a vegetarian diet as do most Hindus. Sam is vegan because of religious as well as ethical reasons. He believes that animals have souls.

“In saying that he doesn’t judge the rest of us, and as a trainer he dedicates all his spare time to helping people lose weight and adapt healthy lifestyles.” Kathi clarifies. “He understands that our bible teaches us differently, therefore it’s entirely our choice if we choose to eat meat.”

Initially, living together was a little difficult, planning lunches and dinners took some effort as the couple had to cook meals separately which meant double expenses, time and effort.

“We didn’t like that because we wanted to eat the same things. It was easier for me to just give up red meat entirely,” she says, highlighting that the vegan side is becoming more popular. Something she has been noticing not only in the media, but in the shift in the lifestyle of many around her.
According to Kathi, a vegan diet is easy to follow if you know what to cook. It’s important to have variety, and the couple really don’t miss out on anything as they have found substitutes for things.
“I don’t cook any beef or lamb at home just out of respect for Sam. I will occasionally eat chicken and fish but for the most part if I feel like red meat I will just go next door to mum and dad’s – yes, we live next door!”

“Most of what we eat is vegan, if I still feel like some meat I will then add it to what I’m eating and Sam will add his tofu to his plate. I have pans and chopping boards that I use for fish or chicken so Sam will never use these to cook with,” she goes on.

“We don’t eat cheese anymore and have found an alternative vegan cheese. It takes sometime to retrain your palette but it’s definitely worth it. You don’t need to miss out on your favourite foods. We drink almond milk instead of dairy milk, initially it tasted different but we’re used to it now and we can’t drink anything else. My parents eat tofu and quinoa with us. We’re always introducing new things to our diet. Tonight we’re having zucchini noodles with a garlic, parsley and avocado sauce, it’s creamy, rich and filling!”

Unsurprisingly, yemista would have to be a favorite in their house, alongside fakes (lentils) and revithia (chickpeas) – which they have every week. 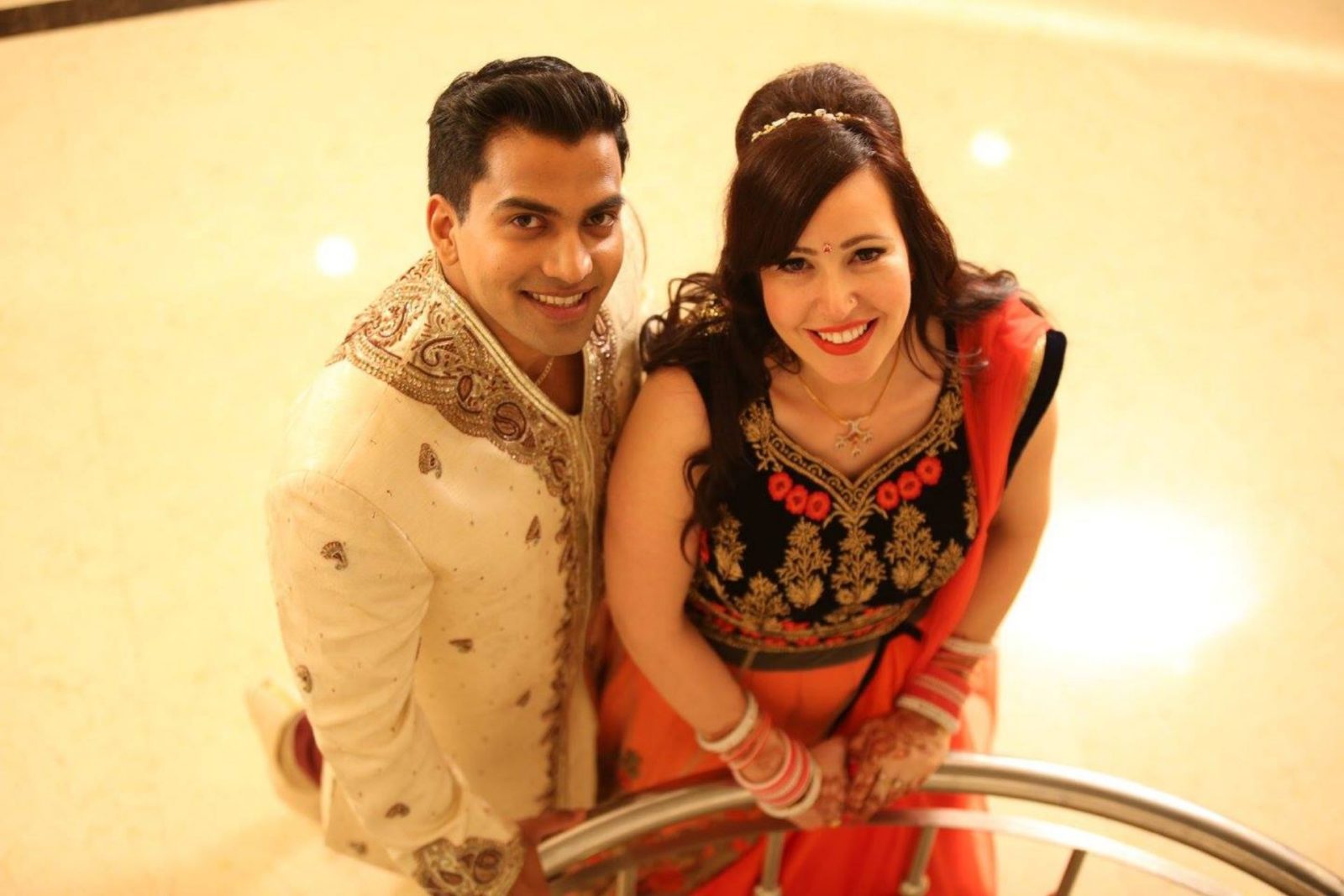 “We alternate the flavours with these; one week we’ll make them Indian style (dahl and chole) and the other Greek style, the flavours are so different for both!” she says.
“There’s also always spanakorizo in the fridge and tourlou (mixed vegies). Roast vegies and skordalia (mashed potatoes with garlic) are a weekly favorite also!”

Meanwhile, anytime the couple have a party they will always put all the vegan dishes on one side and the meat dishes on the opposite side. For Greek Easter, we had three meat dishes compared to the dozen vegan dishes. If our family can do this and love this then there is hope for everyone,” Kathi says.

“We’re really fortunate that food was our only main challenge, very blessed in fact.”

Even though it wasn’t hard for Kathi to give up on meat at home, accepting this dietary choice was a bit harder for her Greek father who was constantly trying to get Sam to eat meat; he still does this every now and then!

“It’s so strange to a Greek that someone can exist and live a healthy life and not eat meat,” she adds, admitting that from the first time Sam visited her home he was questioned about his food choices.

Sam being a personal trainer, and a competing bodybuilder, however, has helped. For years Kathi’s Greek meat eating father was convinced that a vegan lifestyle was unhealthy; if Sam ever got sick which was rare, my father would attribute that to not eating meat.

Seeing Sam onstage, looking as healthy as he did has changed that. Her husband is the epitome of health; he meditates, he exercises and he eats right.

“I think it would be nice to show the public that good guys like Sam should never give up! Will he ever look like Arnold Schwarzenegger? No! He’s one of those good guys who goes about his business quietly. There are so many vegan athletes on social media who credit their muscles to a plant-based diet but they’re on steroids!”

“My point is, if Sam can look this amazing on a plant-based diet then it’s possible for anyone to achieve the body they want, naturally. We are so obsessed with how we look and we’re subjecting our bodies to all sorts of things from pills to injections and even photo shopping our images. It’s time we called it out, being fake is bad for our health, being natural should be what is celebrated.”

READ MORE: Two languages are better than one

Sam is loved by everyone who meets him, especially his elderly Greek clients who he trains at the local gym. My father is his biggest supporter and has decided to even reduce his meat intake!

“It’s not just about what you put in your mouth, it’s also about what you feed your mind. Sam has taught me how to meditate, I really believe that being able to calm your mind and rid it of the noise in this world, brings you closer to God,” she says.

Kathi believes that if someone is going vegan for non-cruelty reasons, they will get through the transition easier, as long as they give it time and accept that food for the most part will taste different.

But would Kathi change her lifestyle to better suit Sam’s?

“When we were dating I became vegan and I can honestly say I felt the healthiest I ever had and I lost a lot of weight! It’s definitely something I’ll do again for health and ethical reasons,” she says.

“Sam’s passion for saving animals is so infectious. My parents now eat less meat and that is huge considering my dad’s nickname is “The lion” – a nickname given to him by his grandchildren. The health benefits of a vegan lifestyle are plentiful, and Sam is the epitome of that!”