Pythagoras, our forefather and a pioneer of ethical veganism, taught his students the importance of animal ethics. Perhaps his Greek descendants should reconsider Our parents originate from the Greek island of Lesvos and migrated to Australia in the 1960s. We are from a working class background, our mother was a seamstress and our father a painter.

Our late father, in particular, instilled core values in us, such as justice, anti-oppression, anti-imperialism and anti-capitalism. Whilst in Greece, he was politically active (on the left) and in opposition to the emerging Junta of 1967. He departed Greece just before the Junta commenced. In contrast, our mother was an avid animal lover who was always rescuing animals and nursing them back to health.

The values instilled in us as children, by our parents, would later lead us down the path of becoming animal liberation activists who identify primarily as anti-speciesists. Speciesism is the discrimination against members of a different species, and the assumption of human superiority leading to the oppression and commodification of animals.
Maria works in finance and I’m in the health sector.

We were raised in a non-vegan household and as animal lovers grew up with many “pets” (today we refer to these individuals as “companion animals” in an effort to denounce animal property status in all its forms).

For myself, the indoctrination at primary school began during the 1970s with the daily milk truck runs – where a small bottle of cow’s milk would be given to every child.

ALSO READ: The hardest part about being vegan isn’t abstinence from meat, but people’s reactions to it

I personally never made the connection that non-domesticated animals (such as cows) were no different to our companion animals. However, as a child Maria constantly questioned this. On one occasion, there were bite size pieces of “steak” on her dinner plate and she asked our mother “what animal is this?” Our mother eventually answered “It is a cow”. Maria threw her plate off the dinner table (stubborn 5 year old), refusing to eat. She was denied dinner that night and so her indoctrination began. Maria often talks about this as she believes that children have an innate insight into animal sentience – a knowing which is discouraged with every mouthful by our parents, the school system and society at large.

In our youth, Maria and I never really associated these products with living, breathing sentient beings and in time these animals became an invisible class. We were only occasionally reminded of their existence when we saw a transport truck carrying these individuals (to slaughter). Momentarily, our benevolence was awakened. However, as soon as the trucks passed, we compartmentalized our feelings as we disassociated from the reality of where these animals were headed.

As adults, Maria and I learnt of an industry through which Australian animals were being sent overseas for slaughter. This was our introduction to the Live Export (LE) industry – a trade where animals are crammed onto ships or planes suffering during arduous journeys to foreign lands for slaughter by foreign hands. Statistics suggest that 80% of the Australian population oppose the LE industry. Whistleblowers put their lives at risk in attempts to expose the LE atrocities (note recent 60 minutes expose). We began to advocate for the end of the Live Export trade, to all countries, for all animals and at all times.

“As long as Man continues to be the ruthless destroyer of lower living beings, he will never know health or peace. For as long as men massacre animals, they will kill each other. Indeed, he who sows the seed of murder and pain cannot reap joy and love”

We attended our first LE rally on the steps of Parliament House in Victoria. It was here that I heard a rally attendee yelling out to Nick Xenophon (a speaker) “What about Australian farm animals?” and I remember questioning this, as I assumed that animals in Australia were killed “humanely”. Seeds of doubt were planted. Some time later, I attended another LE rally where Patty Mark, of Animal Liberation Victoria, took the stage. She began to speak about the reality of the Australian pig industry, stating that all pigs (whether they are factory farmed, “free range” or “organic”) end up at the same slaughterhouse. With her words, she painted imagery of pigs having their throats slit, production lines moving so fast that pigs do not bleed out before hitting scalding water tanks and being boiled alive. At that very moment, I denounced the “meat” (flesh) industry and became vegetarian.

Shortly after, a colleague who was also a dairy farmer had learnt of my vegetarianism and quickly labeled me a hypocrite. She informed me that animals in the dairy and egg industry were also exploited and killed. I learnt of bobby (male) calves who are unable to produce milk and are sent to slaughter within days or weeks of being born, denied the bond with their mother and the milk she produces for him. I learnt of downed (mother) cows who are no longer able to be forcibly impregnated and hence useless as milk making machines. I learnt of male baby chicks, who as they are unable to produce eggs are placed on a conveyer belt on their first day of life and macerated (ground up) alive or tied into rubbish bags until they suffocate. These were the ills of vegetarianism. 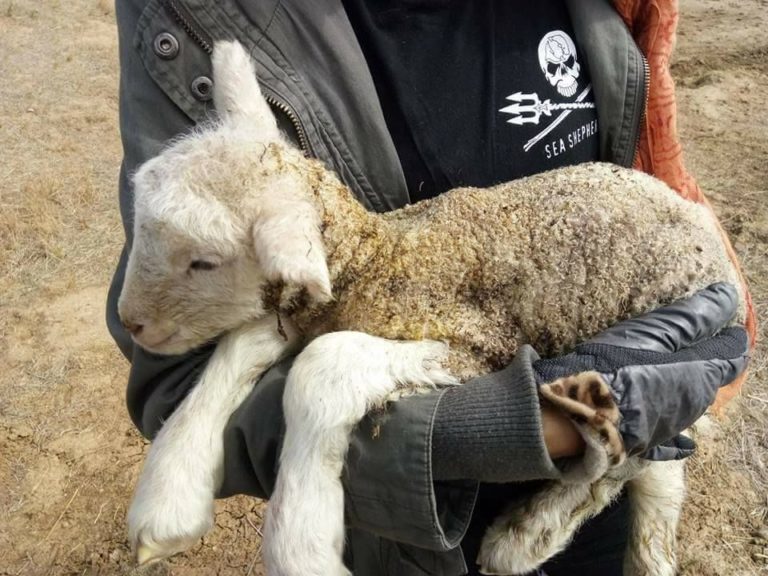 Maria was introduced to vegetarianism by her partner and was vegetarian for 10 years before becoming vegan. Maria’s decision to become vegan was defined by an interview with Philip Wollen (a former banker, a philanthropist and OAM recipient) describing an incident he witnessed that made him vegan. It was an all too common story of a mother “dairy” cow bellowing for her child as he was taken away from her to be slaughtered, due to never being able to produce milk and hence useless to the dairy industry. On Christmas Day in 2015, Maria became vegan.

Our first action together, in the form of non-violent civil disobedience, was meant to be a seemingly low-key disruption at a relatively quiet steakhouse, “Rare Steakhouse” on a Saturday night in January 2018. The goal of the action was to force transparency on an industry that otherwise operates in a veil of secrecy and force the animal agenda into the public’s consciousness – it was most certainly not aimed at turning the restaurateur and its customers into “vegans”. The action went viral, global coverage was obtained and to this day is often a discussion point in the media.

In 2018, a documentary titled “Dominion” (www.watchdominion.com) was released which exposes standard and legal industry practices regarding animals used for flesh, fibre, research and entertainment in Australia. That same year, we attended a march to promote the documentary and whilst 3,000 people marched through our city streets, we received little to no mainstream media.

ALSO READ: Walking off the beaten aisle: Kathi and Sam, a love story beyond ethnicity, religion and… food

Our activism journey culminated in the participation in the one-year anniversary Dominion action themed “You have been lied to”, which took the form of multiple direct actions throughout Australia in April 2019. This included over 150 activists taking over the intersection outside Flinders Street station, slaughterhouse shutdowns, lock-ons to trucks, machinery and the like with the overarching aim of encouraging the public to view the documentary. In the days after the action, the interactions with documentary skyrocketed with over 60,000 new views and many people became vegan overnight. The action received global attention, including coverage in The New York Times. It was deemed the largest Animal Rights action the world has ever seen.

Undoubtedly, an animal liberation resistance is being formed globally in the face of speciesist violence.

At this very moment, Australia is in “spring lambing” season. Farms around Australia are littered with dying day old lambs that have been born at a time of the year deemed profitable by farmers – even though 15 million young lives this year alone will not survive the below zero temperatures and the threats of predators. These deaths are factored into farmers’ business models, indicating that the loss of their lives is expected and immaterial.

As anti-speciesists, we believe that breeding animals for the sole purpose of exploiting and killing them for profit is unjust. This fact can no longer be ignored by society. This invisible class of sentient beings is equal to humans in their capacity to feel pain, fear, mourn loved ones, form friendships and their desire to live free from harm. They are intelligent beings with personalities and are capable of reasoning. They are not units of production, commodities, inanimate objects to be traded and sold to the highest bidder. There is no way to humanely slaughter an animal that does not want to die. They fight, resist and rebel against their oppressor. They do not willingly go towards the slaughterer’s knife. Animal liberation activists do not advocate for better conditions (welfareist approach) but for the abolition of these animal exploitation industries. Furthermore, Maria and I believe that all oppression is interconnected. Therefore, we are activists for the liberation of animals, humans and the environment (a concept known as “Total Liberation”). Organisations we work with include the Save Movement, Frontline Action on Coal (FLAC), Latin American Solidarity Network (LASNET), Vegan Demolition Crew (VDC), Aussie Farms, Vegan Rising and other refugee advocacy networks (against the incarceration of asylum seekers in Manus, Nauru and onshore detention). We also work with other concerned citizens who organize actions as part of a leaderless effort to denounce these industries.

For the most part, our family and friends understand and respect the reasoning behind our veganism and activism but they do not necessarily engage with the content due to their own cognitive dissonance. Whilst the consumption of animal products in the Greek culture is extensive, most cultures consume animal products, so being Greek is no different to what people of different ethnicities (who become vegan) experience. Although it is difficult sitting at a table where animal products are being consumed, it is arguably important to not isolate oneself amongst vegans and to always aim to raise awareness for we once were also consumers of these products. Interestingly, there has been a wave of Greek restaurants holding dedicated vegan nights in recent months.

Pythagoras, our forefather and a pioneer of ethical veganism, taught his students the importance of animal ethics. He believed animals had a soul. Pythagoras states : “As long as Man continues to be the ruthless destroyer of lower living beings, he will never know health or peace. For as long as men massacre animals, they will kill each other. Indeed, he who sows the seed of murder and pain cannot reap joy and love.”

Perhaps the Greek population and society at large who revere him for his mathematical and philosophical prowess, should also consider and embrace his position on animal liberation.