Seafood tycoon Michael Angelakis talks about his father’s determination to build one of Australia’s most successful seafood companies, his battle with cancer and a love for cooking “My migrant father was my greatest inspiration. I wouldn’t be where I am today if it wasn’t for him,” says seafood tycoon and celebrity cook Michael Angelakis.

It’s been 90 years since the Angelakis family left their beloved islands of Symi and Rhodes to migrate to Australia, and what better way to celebrate this milestone than Michael launching a new season of Australia’s favourite cooking show ‘Out of the Blue’.

“I am just over the moon to be taking Australian viewers on a culinary journey of fresh food and local produce,” says the 68-year-old.

“To me, this is a great way to celebrate my family’s migration history that started 90 years ago when my grandfather migrated from the Greek islands.”

Joining his long-time colleague Michael Keelan, the two men have partnered with a number of South Australian, Western Australian and Tasmanian wineries to explore how seafood and wine come together to create perfect meals.

In each episode they match a wine with their recipes, talking to local winemakers and visiting cellar doors to learn everything there is to know about wine matching and creating the perfect drop.

The new season, which premiered last week, showcases the Eyre Peninsula’s coastal regions — Streaky, Baird and Coffin Bays — along with the Coorong and Barossa Valley areas.

“This year has been great for both Michael and I, with filming and doing gigs that promote South Australia, and a great way to keep me busy following last year’s sale of our family seafood company, Angelakis Bros,” he says.

The multi-generational business with its three prominent retail seafood and poultry stores 58 years in operation, was sold after Michael and his co-owners were unable to secure a viable family succession plan.

“It’s been four generations that my family has been involved in the industry and of course there is still a tinge of regret and some sadness, but circumstances just didn’t leave us with another choice,” says Michael, who puts the family’s success down to his Greek upbringing, his family’s support and his father’s influence throughout the years.

Losing his father, his battle with cancer and bipolar
Michael’s father George, a migrant from the picturesque island of Symi, came to Australia in the 1920’s and together with his brother Nick and brother-in-law Sam Sperou, managed to turn a simple family seafood business into a leading Australian enterprise.

Unfortunately, the tireless entrepreneur died of a heart attack at the age of 74.

“My father George was an absolute gentleman and my biggest inspiration. There are times that I wish that he had been awarded the Order of Australia medal instead of me, because he was the one that pioneered a lot of stuff. Losing him had a huge effect on me,” reveals Michael who at the age of 50 had his own health scare, diagnosed with Non-Hodgkin Lymphoma, a very aggressive form of cancer that required major operations, painful infusions, as well as intrusive and invasive forms of treatment and 25 prescription pills a day.

“They gutted me like a fish and that’s when I thought that karma must exist; I guess the fish finally got back at me,” says Michael.

But with the support of his loving family, he managed to beat the odds and overcome the cancer.

Not long after his health scare, Michael became an ambassador for the Cancer Council of South Australia and the Salvation Army. But despite getting over the cancer, the feeling of depression started creeping up.

“I was in Italy filming and I found myself feeling demotivated, depressed and withdrawn. That’s when I realised that something was not right and with my wife’s urge, I decided to seek medical advice.”

The seafood tycoon has never made a secret of his long history of depression, revealing “my mother was a manic depressive, so mental illness is in my genes”.

He describes his bipolar disorder as hard and difficult, filled with periods of depression and periods of elevated mood that are not easy to overcome without medical interference.

The dyslexic son of Greek migrants went against all odds and came out stronger than most.

He built an empire, received an OAM, became famous, survived cancer, hosts one of the longest running television shows in Australia and has gained the utmost respect within both the Greek and Australian communities.

“I’d like to do more. Retirement is boring and it’s not good for the health, so be sure to tune in and watch us do what we love the most. Cook and spread happiness.
“After all, that’s what life is all about.”

‘Out of the Blue’ airs on Saturdays at 5.30 pm on Channel Seven.

A traditional Spaghetti Marinara with a zesty twist! 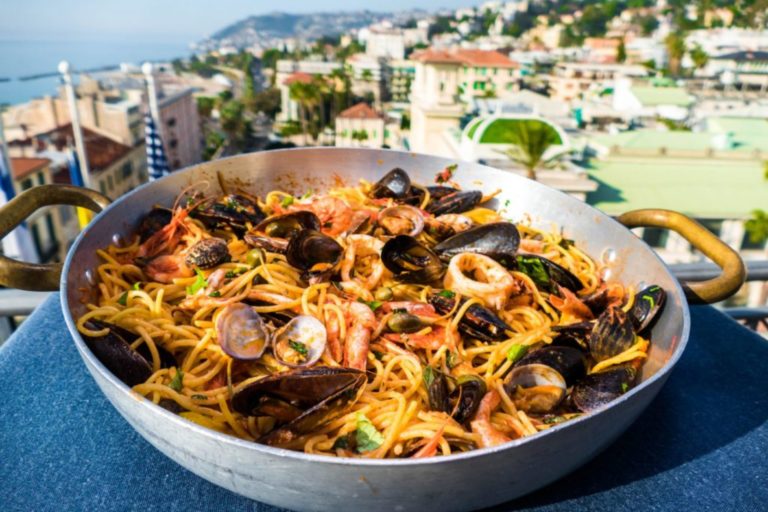 Method:
1. To begin, cook spaghetti in boiling water.
2. Heat pan over medium heat and add olive oil. Gently crush garlic cloves with the back of a knife and chop the chilli into large chunks, adding them to the oil. When fragrant, add the seafood.
3. Deglaze the pan with white wine. After a minute add the passata and a tablespoon of capers. Simmer until the seafood is cooked through.
4. Add spaghetti to the pan with chopped parsley and basil. Cook for a few more minutes, then top with lemon zest. Enjoy!