His Eminence met with Federal politicians in Melbourne this week 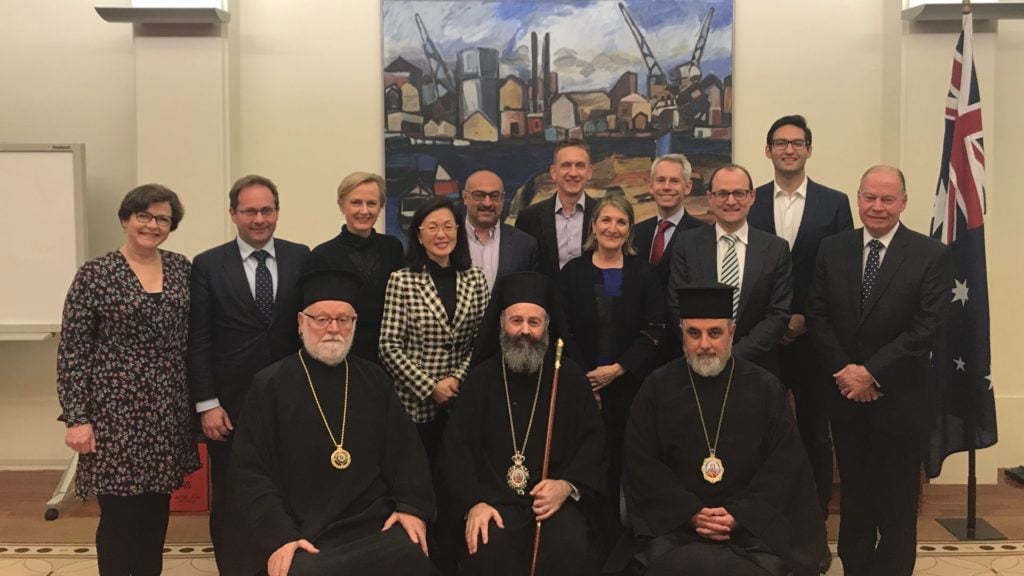 His Eminence Archbishop Makarios of Australia had a meet and greet with Federal Members of Parliament and Senators on Monday to discuss their local Greek communities.

The meeting took place at the Commonwealth Parliamentary Offices in Melbourne and was hosted by the Parliamentary Friends of Multiculturalism – a bipartisan group led by Federal Member for Calwell Maria Vamvakinou MP and Federal Member for Monash Russell Broadbent MP – and was attended by politicians with large Greek constituencies who were very keen to meet His Eminence and welcome him to Australia.

Ms Vamvakinou began the meeting by thanking His Eminence for taking the time out of his busy schedule to be there. His Eminence thanked the members for all their work in preserving Greek culture, faith and language. Mr Broadbent told His Eminence that this was the largest group of politicians he had seen gathered for a meeting, emphasising the importance of the Greek Community to Australia’s Federal Parliament.

Each respective member introduced himself to His Eminence and talked about their local Greek speaking constituencies, with most of them having one or more Greek Orthodox Churches in their electorate. And they all added how much they look forward to continuing to work with the churches.

Mr Giles, Shadow Minister for Multiculturalism, spoke of the importance of conversations between Government and churches and welcomed opportunities for future conversations.

Ms Vamvakinou highlighted the important role the Greek Orthodox Church has always played in the settlement process of Greek migrants in Australia, a role that continues today with the second and third generation of Greek Australians.

Mr Broadbent said that although many Greek migrants have learnt English, it is well known that they tend to revert back to their mother tongue as they age. This poses difficulties in the delivery of services for the ageing population, particularly constituencies in regional Victoria such as Mr Broadbent’s in Gippsland.

Dr Allen said the Greek community has played an important role in Australia’s history; that faith-based education is important to her constituency and she talked of the need of value-based leadership.

READ MORE: Archbishop Makarios offers his ‘whole being’ to the people of Melbourne

Mr Hill commended the important work churches have done to maintain Greek language through community schools, and Mr Giles added that language is a pivotal way people stay connected to their cultural heritage. Archbishop Makarios was delighted with the stories that each politician shared with regards to their understanding and appreciation of the Greek community.

Ms Kearney talked about the vibrancy of her local Greek community and acknowledged the food and culture provided by so many Greek businesses in her electorate of Cooper.

Mr Mulino talked about his birthplace Brindisi in Italy and the connection it has to Greece.

The Archbishop spoke of his birthplace of Crete and mentioned that the two are “basically neighbours”.

Mr Mulino also told His Eminence how much he is looking forward to the celebrations of the Virgin Mary on 15 August at the Greek Orthodox Parish of Panagia Soumela in his electorate of Fraser.

Ms Liu talked about the similarities between her Chinese heritage and her admiration for Greek culture, emphasising how the two cultures pride themselves on family values.

Mr Khalil talked about the 14 per cent Greek speaking electorate he represents in Wills, and the four Greek Orthodox churches: St Eleftherios and St Vassilios in Brunswick; The Presentation Our Lady in Coburg; and St Nektarios in Fawkner. Mr Khalil gave praise to the tireless efforts of Greek Orthodox organisation Our Daily Bread in Coburg in feeding the homeless, as well as Pronia for the great work they do for the Greek community.

Senator Ciccone told the Archbishop how important it was to have both sides of politics in the room, and the importance of bipartisanship on the issue of multiculturalism, especially in Victoria – Australia’s most culturally diverse state. He also talked about his childhood growing up in the Greek-centric suburb of Oakleigh.

Mr Burns said he enjoyed the warmth of his Greek constituency and their hospitality, and how fortunate he is to have Theofania at Port Melbourne in his electorate, which he looks forward to attending every year.

The meeting was closed by Mr Broadbent who thanked and prayed for His Eminence and said “your church has been a blessing to Greeks across Australia”. Bishop Iakovos, on behalf of His Eminence responded with a prayer for the politicians, and prayed that they continue to serve the needs of the Greek and other communities in Australia.