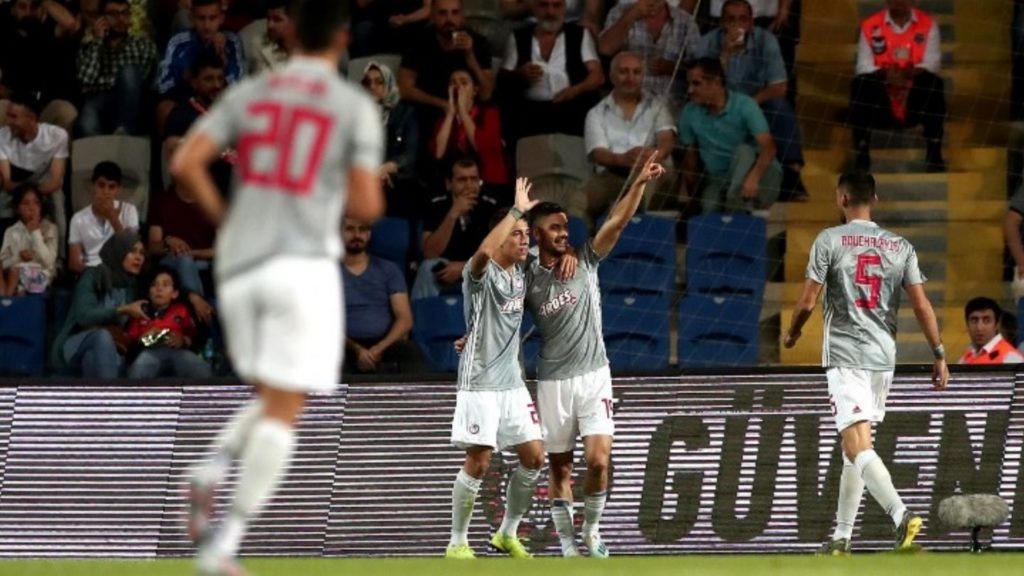 Olympiacos have made a great step towards advancing to the play-off rounds of the UEFA Champions League, after an important away win at Fatih Terim Stadium against Istanbul Basaksehir 0-1.

The erythrolefki were always in control of the game and didn’t allow their goal to come under threat many times, but when it did, goalkeeper Jose Sa was there to put out the flames.

Manager Pedro Martins didn’t change a single player from the starting 11 that annihilated Victoria Plzen a week ago at Georgios Karaiskakis Stadium and the players rewarded him by holding possession of the ball and keeping their lines close. Meanwhile, the home team seemed unable to find the key that would unlock the visitor’s defence.

The first real chance for Okan Buruk’s side had to come from an unforced error by Jose Sa, who in his attempt to save the ball from a corner dropped it from his hands with Enzo Crivelli pouncing on the opportunity to strike, but it bounced off his teammate Fredrik Gulbrandsen to go out for a goal kick.

Not much else occurred until the break, as a result of Olympiacos’ tight formation highlighted by the duet of Ruben Semedo and Yassin Meriah at the heart of defence.

In the second half, the visitors realised they could take more away from the game and began to knock on the door of their opponents more often.

During one of their ‘visits’ on the 53rd minute, former French international Mathieu Valbuena carried the ball forward and after dribbling past his personal defender lifted it into the box for the oncoming Giorgos Masouras to head it into the back of the net.

The Turks desperately needed more goals, so they began to come forward with more of a drive, but still couldn’t do much when they came up against the duo of Semedo-Meriah, while Tsimikas and Guillherme also performed well.

Martins replaced an exhausted Valbuena for a more refreshed Mady Kamara, with the Guinean winning the second yellow card of Irfan Kahveci after a clumsy challenge by the Turk on the 80th minute.

The Portuguese coach saw the opportunity to score even more goals and effectively end the tie on the first game, introducing former Atromitos winger Bruno to the game.

A decision he would soon come to regret, as the Brazilian almost put the result in jeopardy. Initially he used his hands to block an attempt by Bosnian midfielder Edin Visca, awarding the Turkish side a free kick in an advantageous position.

As if that wasn’t enough, during injury time he thoughtlessly used his hands again, this time inside the area, to block yet another cross, giving the home side the chance to equalise from the penalty spot.

Jose Sa wasn’t willing to give away the hard-fought advantage so easily and saved the kick by Visca, allowing the red-and-whites to leave Turkey as the victors.

Olympiacos had a clear chance to score a second on the counter, but once again Bruno took way too long to pass the ball to an unmarked Daniel Podence.

They are still clear favourites to finish the job next week in Piraeus and move to the play-offs, where they will meet the winner of the Krasnodar-FC Porto tie.

The Portuguese beat the Russians in the first game 0-1, thanks to a late goal by former PAOK midfielder Sergio Oliveira.

READ MORE: PAOK hold on for a draw against Ajax