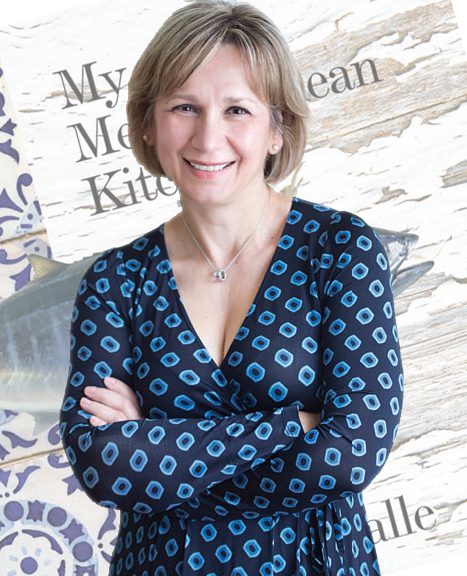 “This reminds me of my kitchen in Richmond!,” exclaims Mary Valle excitedly and yet with mixed emotion as she takes a seat in the Northcote cafe where we’ve chosen to meet. It is a rather poignant comment as I was going to begin my interview by asking her about her first kitchen – after all, both her cookbooks invite us into her kitchen with her debut venture My Greek Kitchen and its homely follow up My Mediterranean Kitchen. Mary begins her latest cookbook by describing her first kitchen as an 18-year-old married woman.

Her first kitchen was small. No mod-cons, just a tiny bench with enough room for a toaster and a Greek Orthodox icon. A small rectangular table with four chairs, and of course the high chair, which becomes the nightly dinner spot where conversations flow for many years to come. A cosy humble place she says she wouldn’t trade in for the world, even if she could have had her dream kitchen.

The memories that were born out of that kitchen could never be replaced. But the kitchen she is transported to today is that of her mother’s space in their family home in Richmond, where Mary grew up. Decorated with her mother’s hand-stitched doilies, fresh flowers and with the scent wafting from a bunch of oregano hanging in the corner to dry, most of Mary’s fondest memories of her mother and father took place in there. And given that her mother, Katina, is the greatest cooking influence in her life, it goes without saying that much of our conversation is spent paying homage to this woman. “I think food brings up a lot of emotion,” explains Mary who believes the two are inexplicably tied. “Some things can be happy things that you remember or sad things, but food is always involved.”

Mary’s first foray into the kitchen was when she married. As a young woman she was unsure how to manage a household, provide meals for her husband and care for her small children. She remembers a time when she’d speak to her mother in desperation asking, “I’ve got some chicken – what do I do with it?” Her mother would walk her through recipe ideas and meal suggestions and Mary would jot them down. Unbeknownst to her, these homely, uncomplicated recipes would spawn her career as an author. “I started by documenting the recipes for my children before I get too old or pass on, especially the Greek recipes,” she says, and that collection created her first cookbook My Greek Kitchen.

But her latest endeavour also features traditional Greek meals with a selection of other Mediterranean gems she has picked up through her travels. Food from France, Spain and Italy are peppered throughout this cookbook, which highlights wholesome healthy cooking. Her uncomplicated recipes, with minimal ingredients that chose to highlight seasonal produce instead of obscure ingredients often unattainable to the every day cook, are perfect for time poor or even cash strapped home cooks. But for Mary, this is just what any home cook does for their family. “I don’t see myself as anything more than a mum – a stay at home mum,” she says genuinely, adding this whole journey for her has been surreal. From meeting with publicists, to food stylists capturing the essence of her food, and the many fans who thank her for providing nutritious meals for their family, Mary is still perplexed by it all. And now, she’s about to embark on another journey, with a food trip teed-up for Greece next year. For two weeks, Mary will be guiding fellow travellers on a foodie adventure like no other.

Travelling to Athens, Crete, and Santorini, the fortnight will be spent cooking, eating and visiting wineries and markets. Add to that the cooking classes she provides for those wanting to create home-cooked loving meals. “For me, it’s not about anything fancy,” says Mary about her recipes, “anything complicated – it’s real cooking.” She takes me back to cooking with her aunty in her kitchen using seasonal produce fresh from the garden. Whatever she’d have available they’d pick and take it to the kitchen and together they would cook up a storm. “When I was in Greece with my mum’s sister, she would say to me that she doesn’t eat anything that she hasn’t grown herself – maybe she’d buy some fish or bread if she didn’t make any,” she says talking about her elderly aunt. “That’s why she is so fit, healthy and strong today.”

Mary’s cookbook has that focus on seasonal produce – if you have one or two fresh vegetables you can make a meal easily as the produce doesn’t need much added to highlight flavour. “It doesn’t get much healthier than that,” says Mary of her home-grown and fiscal recipes. And given that the Mediterranean diet is the healthiest in the world, in this book you are sure to find little gems that promote a healthy lifestyle. The lady she stayed with in France would take a pumpkin and turn it into a scrumptious pumpkin gratin, serve it up with salad and that would be the nights meal. Simple recipes, no fancy cooking techniques, and no emphasis on meat and three veg to make a meal.

“That’s the thing about the Mediterranean diet,” she explains, “it’s mainly vegetarian, with a lot legumes and pulses.”

Whilst travelling through Europe, Mary kept her ongoing tradition of jotting down ingredients and recipe ideas in her trusted notebook that she carries at all times in her bag. “People were so generous with their recipes,” she said of the people she met on her travels. “They were so happy to talk about how they make the food, and what they put in. I remember in France being told to always beat the mixture with a fork when making crepes, never with anything else.” These little tips and anecdotes to create authentic meals are scattered throughout her cookbook, with each recipe providing a snapshot into where it came from and why.

Like the bougatsa dish capturing her moments in Florina filling up on fresh bakery cooked custard pastries for breakfast every morning. Each dish in this cookbook provides us with a little window into the life of this humble cook. But all in all, one thing is for certain. When wanting to know about a region’s cuisine, always ask the locals. A trip to Santorini stands out for Mary. Whilst travelling in Oia with her two daughters, the home cook knew she wanted to avoid the main strip for lunch and asked the locals who pointed her in the way of Katina’s Taverna in Ammoundi Bay.

After a short cab ride she was there. “It was the quaintest thing I had been to, it was the most picturesque little port,” she says with a smile remembering the taverna, “and it felt like I had been there before. “The room was filled with locals; fish coming from the boats and they put them fresh on the grill. It wasn’t a flash restaurant, but it was the best meal I had ever had and it was really homely. The lady that owned it, Katina, sat with us and told us that she lives in the village in winter and in summer she opens the restaurant. “And I remember thinking to myself… what a perfect recipe for life.”

For more information on Mary Valle or to purchase her latest cookbook My Mediterranean Kitchen visit www.maryvalle.com.au