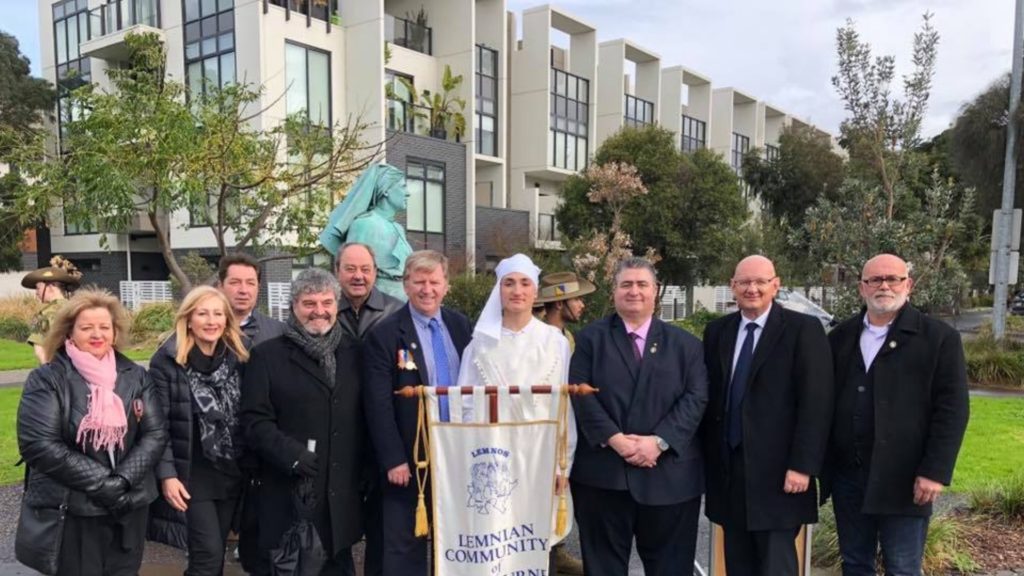 Despite being a cold and windy morning, close to a hundred attendees gathered at Melbourne’s very own Lemnos Square with its unique Lemnos Gallipoli Memorial, for the fourth annual commemoration of Lemnos’ role in Australia’s Gallipoli story.

As with previous years, the gathering was well-attended by many of Melbourne’s Hellenic community, with representatives of the Pankorithinian Association, Pontiaki Estia, Pammessinian Brotherhood Papaflessas, the Krithia Association, the Panarkadians, the Greek Australian Cultural League, Society of Kalamata, Merimna Pontian Ladies of Oceania, the George Devine Treloar Memorial Committee, the Hellenic Australian Chamber of Commerce and Oakleigh Grammar. And of course there were many members of Melbourne’s large Lemnian community taking part, including President Jim Karabourniotis. 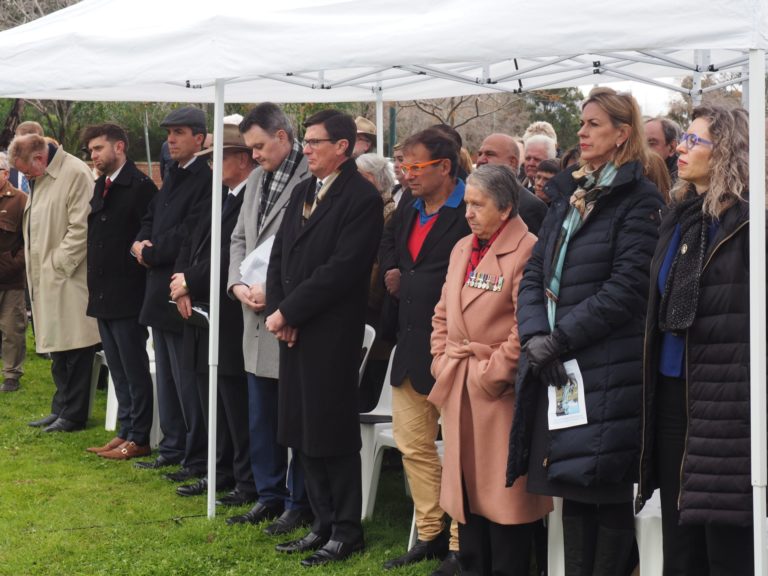 Some of the dignitaries in attendance at the service. Photo: Jim Claven

Cr Gross’ address highlighted the significance of the Lemnos Gallipoli Memorial to the City of Port Phillip, with many diggers and nurses connected to the area having sailed from nearby Port Melbourne to Lemnos. These included Albert Jacka VC and Clarice Daley. Clarice was from Elwood and would marry on Lemnos to Sergeant Ernest Lawrence during the campaign, with both Clarice and Ernest later being buried in St Kilda Cemetery.

Consul-General Michalopoulos spoke of the significance of the Australian presence on Lemnos in 1915, expressing the view that the inhabitants would have taken a sense of security with their arrival on the island. Mr Scott, Mr Angus and the Hon Newmann gave addresses, with the latter recounting the role of soldiers and nurses from his native Queensland on the island, in particular the important role of Brisbane’s Matron Grace Wilson and the men of the 9th Battalion who helped erect the Australia Pier near Mudros, which still stands to this day. He thanked the Committee for its part last year in having unveiled a new memorial on Lemnos restoring the name of the pier.

In his address to the gathering, Mr Tarlamis OAM recounted the story of Lemnos’ role in Anzac, the thousands of Australian soldiers and 130 Australian nurses who served and the 148 who remain buried there. He went on to focus on the day’s release of the Committee’s new publication ‘Lemnos & Gallipoli Revealed’ written by myself. This 350 page large format publication reproduces more than 300 historic photographs taken by the Anzacs on Lemnos during the Gallipoli campaign, the vast majority of which have never before been published. Mr Tarlamis said the Committee was proud to be able to bring this important historical publication to a wider public and expressed the view that through its publication the Committee’s aim of enhancing awareness of Lemnos’ role in Gallipoli would be better understood. 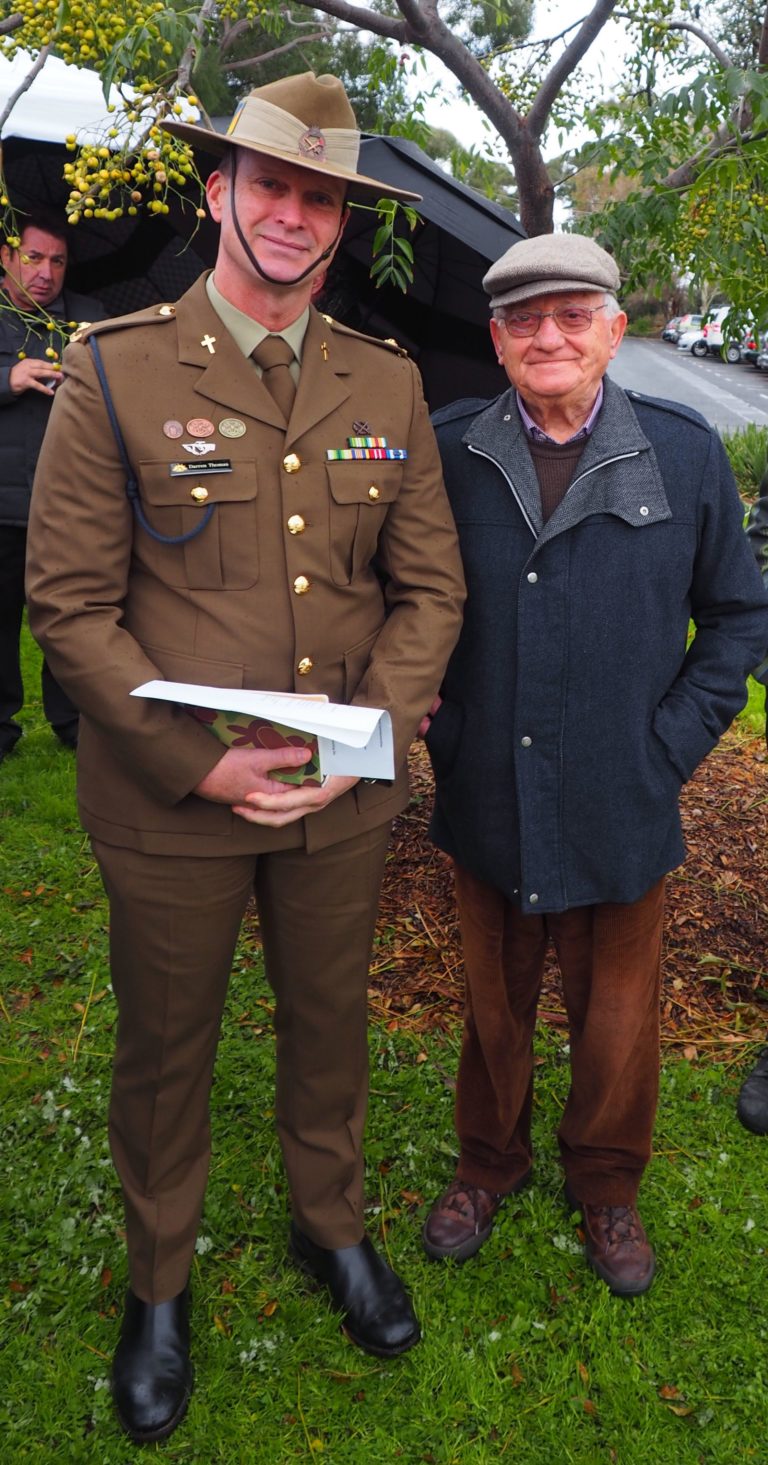 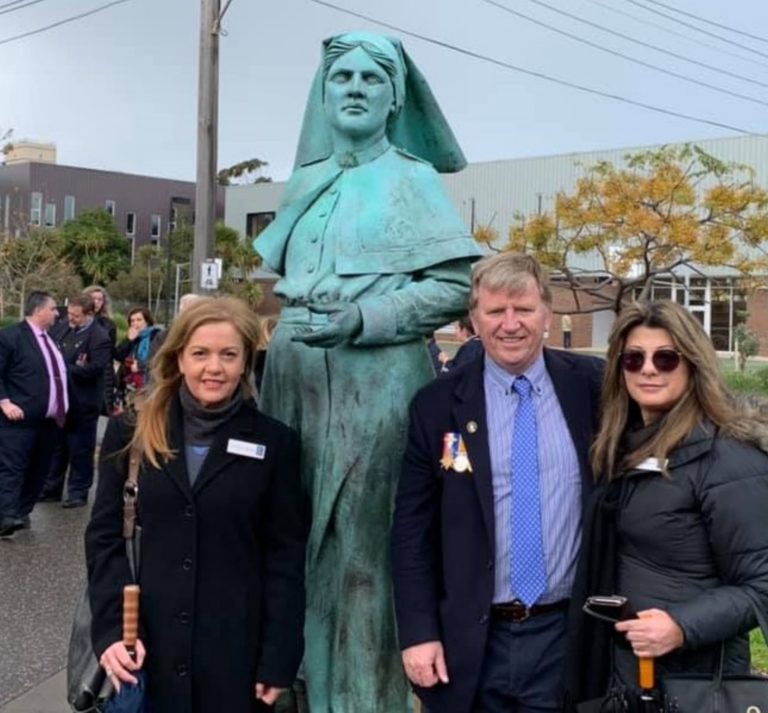 In delivering the service’s key note address, I pointed out the significance of the Lemnos story in not only the Hellenic link to Australia’s Anzac story but also as the little appreciated beginning in the coming together of Australian and Hellenic culture. I reflected on some of the moving stories that I have come across and are included in the book, from one digger writing home of his enjoyment at taking part in New Year celebrations in a local village on the island, to another’s sharing lunch with a local farmer on a hill above Mudros Bay. The many stories recounted in the book explain in words the backdrop to many of the scenes depicted in the photographs. Together these stories and pictures represent a unique Australian documentation of Lemnos and its life over 100 years ago. It is a story that needs to be told. In conclusion, I thanked the
Committee for placing its trust in me and to the many institutions and individuals who have contributed to the publication in terms of supplying photographs and other archival material, those who contributed financially and those who worked on the layout and printing of the book itself.

The formal service included the 30 Army Cadet Unit, again forming the service’s catafalque party, Dimitris Tambakis in traditional Lemnian costume, a prayer read by Australian Army Cadet Chaplain Darren Thomas, wreath laying and playing of the last post and the Australian and Greek national anthems by the Royal Australian Navy Band. Oscar Pearce, a student from Albert Park College, gave the reading recounting a story from Matron Grace Wilson’s diary, recording the wave of wounded that greeted the arrival of the nurses and the lack of medical equipment available to them during their first days on Lemnos. As with previous years, in honour of Piper Albert Monk who served on Lemnos with the 3rd Australian General Hospital, the service included the playing of the Scottish bagpipes by Stacey Harris and Eric from the Melbourne City Pipe Band. The service concluded with the unveiling of Melbourne artist George Petrou’s new painting commemorating the role of Lemnos in the Gallipoli story, followed by the release of my book ‘Lemnos & Gallipoli Revealed’ and a book signing. On behalf of the Lemnos Gallipoli Commemorative Committee, Mr Tarlamis OAM thanked all for attending the service. 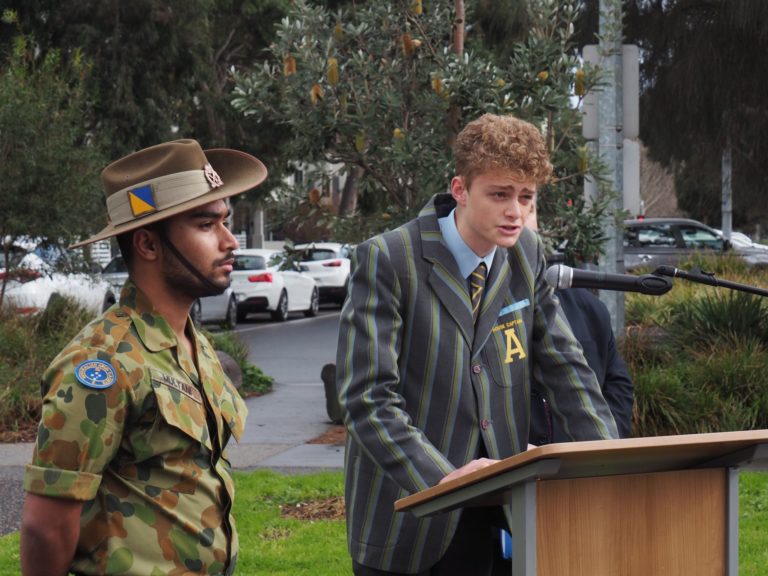 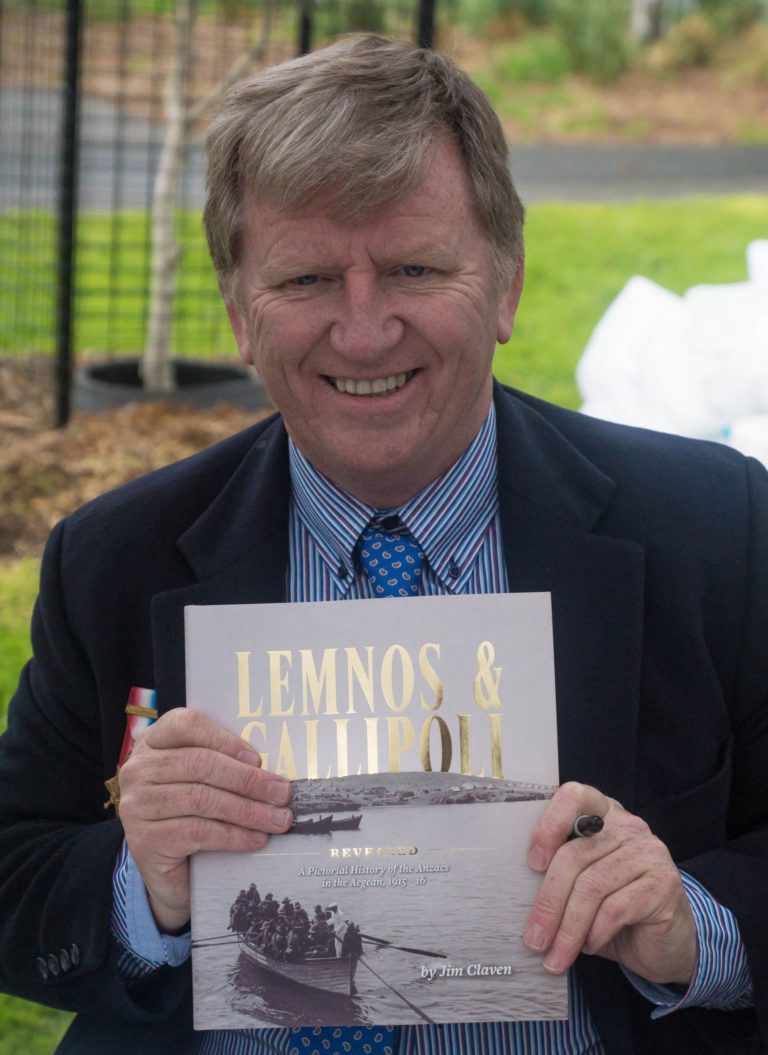 Copies of the new publication ‘Lemnos & Gallipoli Revealed’ can be obtained by contacting the Committee’s President, Lee Tarlamis OAM via email: leetarlamis@hotmail.com. The book is priced at $80, excluding postage and packaging. A formal launch of the book is being planned for later this year at a location to be confirmed within the Melbourne CBD.