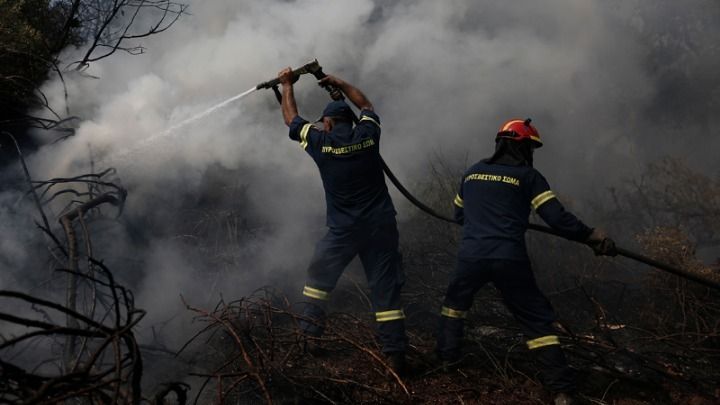 Almost 400 firefighters are battling to control the blaze in Evia.

Greece has deployed nearly 400 firefighters and is backed by volunteers and EU water-bombers in a battle to contain a major forest fire in a nature reserve on the island of Evia.

The fire is burning the edges of a wildlife refuge northeast of Platania, and is fuelled by strong winds that are hampering firefighting efforts.

The Fire Brigade hoped that the fire would be brought under control on Thursday as the weather outlook was better than in the previous days, however the perimeter of the fire is now out of control. “We are more optimistic today because the winds have died down,” Yiorgos Kostopoulos, civil protection supervisor for Evia, told ERT television, however there were fears that the winds would rise again.

The sanctuary has no roads or footpaths and, as a result, the fire grew worse overnight on Wednesday despite efforts to contain it during the day.

Operations were made even more difficult on Thursday as fires brought under control were later rekindled as the weather conditions changed.

Firefighting forces from other parts of Greece have been sent to Evia, and there are currently 382 firefighters battling the blaze of which 172 are on foot, along with 98 fire trucks, five aircraft and five helicopters from the Greek armed forces, two Italian and one Spanish aircraft, as well as a coordinating airplane and a mobile operation centre (known as Olympos). Additional help has come with three aircraft from the voluntary RescEU programme for EU member-states facing natural disasters such as this one.

The local government has contributed with 10 water vehicles and machinery, and there are also 38 volunteer firefighters working in the area.

Four suspects of arson were arrested in Greece on Thursday while efforts to put out the wildfire continued for the third day. Two foreign nationals were held on Chios and two Greeks, aged 52 and 58, were detained in the Peloponnese for  suspicion of arson.

As arson suspects faced the authorities for their involvement in starting the blaze, heroic efforts to save the forests and people’s properties continued in Evia with water-dropping aircraft brought in to extinguish flames in a hard-to-reach canyon. Firefighters on Thursday focused in a ravine near Platania, one of the four villages that had been evacuated when the fire first broke out on Tuesday.

The destruction of 2,268 hectares has been confirmed and the dense pine forest in central Evia, which is part of the Natura wildlife network, has been completely destroyed. Satellite data from the Meteo service of the Natural Observatory of Athens showed on Wednesday that nearly 23 square kilometres had been destroyed around the Mt Dirfy-Messapies area, however since then the figure has risen as the flames rage on.

Each summer, Greece is a high-risk area for fires with hundreds of wildfires ravaging the country due to arson or heat waves. In 2019, a wildfire swept through coastal areas near Athens causing over 100 deaths.