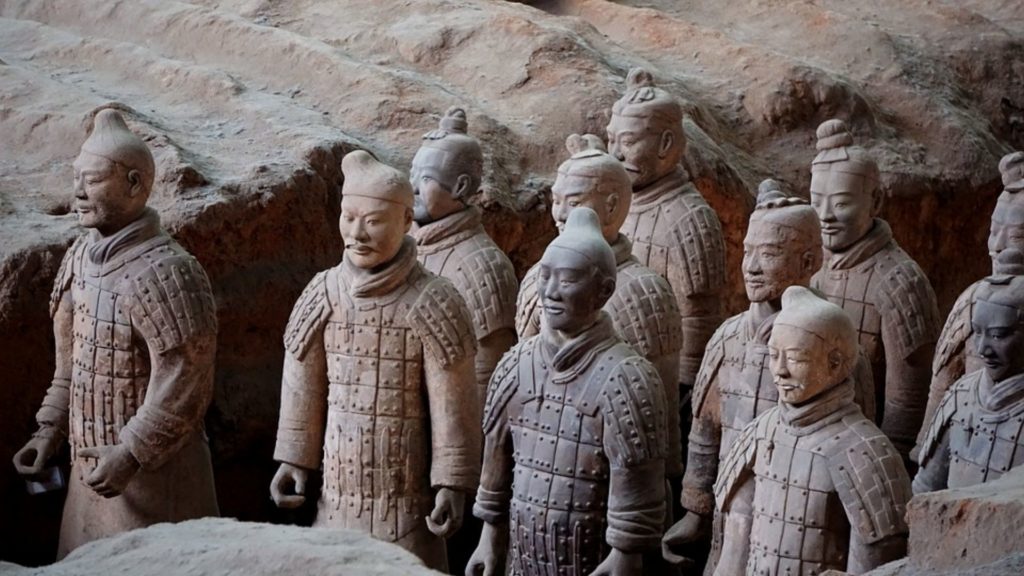 Could the Terracotta Army have an ancient Greek origin?

Fronditha Care was the stand-out winner at ACSA’s Victorian Aged Care Awards 2019, winning two of four awards, putting the organisation at the forefront for innovation in service and individual contribution in aged care in Victoria. The Employee of the Year Award went to Khoryom Tut Nyon, a personal care worker who as a South Sudanese refugee has overcome incredible adversity and had a positive impact, breaking down prejudice and racist attitudes amongst the community towards the African community. Meanwhile Fronditha Care Clayton’s Lifestyle and Activities team, coordinated by Vivi Mihailidou, received the Team Award for the innovative program they run that has respect for and the celebration of the Greek cultural heritage of the elderly residents they care for at its core. “We are so proud of them and will continue to support them in striving for better outcomes for our residents,” said Jim Scantsonihas, Acting CEO. “Fronditha Care congratulates all of the winners and nominees for their outstanding efforts.”

Greek scientist Dr Christos Kyratsous, a 38-year-old graduate of Thessaloniki’s Aristotle University with a PhD from Columbia University in New York, is heading a US-based team of researchers in a cure that has been shown to dramatically improve survival rates for Ebola. The experimental drugs, an antibody cocktail called REGN-EB3, was developed by Regeneron Pharmaceuticals where Dr Kyratsous is vice-president of research, infectious diseases and viral vector technologies. Preliminary findings from a trial of four potential treatments tested in the Democratic Republic of Congo (DRC) showed that REGN-EB3 was so superior to other cures in preventing deaths that the clinical trial was stopped early. The scientist was recently included in Business Insider magazine’s ’30 leaders under 40 who are working to transform healthcare’.

Greek mathematician Dimitris Koukoulopoulos together with Oxford University research professor James Maynard has solved the Duffin and Schaeffer Conjecture, which until now has remained unanswered for 78 years. First expressed in 1941 by mathematicians R J Duffin and A C Schaeffer, the premise behind the maths problem is that a criteria can be set to approximate numbers if certain denominators are excluded – however if some denominators are excluded, even a sparse subset of them, some numbers may never be approximated. “So there are these two worlds where we can get almost all the numbers in one and almost none in the other, but there is a simple criterion that decides when we stumble upon each case,” Koukoulopoulos told Athens – Macedonia News Agency. While solving the riddle is a remarkable achievement, Koukoulopoulos says that he doesn’t know whether it will be applicable to practical matters in life. Despite this however, the mathematician says that funding in this area is vital, given that greater understanding of such equations can have a direct impact on research in the fields of applied mathematics, physics and engineering.

Turgut area villagers on Turkey’s Aegean coast would pray and make sacrifices at an ancient, pyramid shaped structure among the olive groves that they believed to be the tomb of an Islamic saint. The pilgrimage site for Muslims turned out to be a mausoleum for Diagoras, a famous ancient Greek boxer in the third century BC. “I used to kiss the tomb,” one villager told Turkish national broadcaster TRT. “People would sacrifice chickens or goats for their prayers to be answered.”

Professor Lukas Nickel, head of the Department of Asian Art History of the University of Vienna, told The Telegraph that the similarities between the sculptures of China’s Terracotta Army and the ancient Greek statues have caused him to believe that it was the ancient Greeks who contributed to the making of the Terracotta Army. “I imagine that a Greek sculptor may have been at the site to train the locals,” he said. Xi’an’s Terracotta Army was found by farmers in 1974 and consists of 8,000 soldiers, 130 chariots and 520 horses, and 150 cavalry horses buried less than a mile from the tomb of China’s First Emperor, Qin Shi Huang, who unified the country in 221 BC. It is believed that the massive terracotta army was created and placed there to guard the Emperor in the afterlife. Some of the works are currently on display at the National Gallery of Victoria (NGV).

Greece’s Independent Authority for Public Revenue (AADE) has launched its Apodixi Please (Receipt Please) campaign, which informs tourists of their consumer rights. It urges people to ask for receipts during business transactions as part of AADE’s campaign to tackle tax evasion which is rampant at popular tourist destinations. Posters of the campaign are displayed in baggage claim areas at all major airports in Greece (Athens, Thessaloniki, Chania, Mykonos, Santorini, Corfu, Rhodes, etc.). The campaign also appears on select foreign websites.

Brendan Beasley, an electrician from Penrith in Sydney’s western suburbs, spent $10,000 for a holiday and ring so he could propose to his girlfriend of three years. But “after three years together, and for no reason at all… she ended up leaving me,” the 23-year-old told news.com.au. After breaking up in the weeks before the top-secret surprise holiday, he counted his losses and went on the holiday anyway. He kept the ring, but wanted to get rid of it after he discovered that his former girlfriend had already found a new man. As he watched the sun set, he hurled the $5,000 ring in its box off the caldera, captured on video. Brendan has since moved on and is in a new relationship with current girlfriend, Kassie.

Gigi Hadid will never go to Mykonos again after being robbed

Supermodel Gigi Hadid, 24, enjoyed the sun and sea during a luxury vacation to Mykonos in August with her sister Bella, but has vowed never to return to the island after being robbed. “Got robbed. Never going back lol. Wouldn’t recommend. Spend your money elsewhere.” The sisters’ father Mohamed Hadid said his daughters were “traumatised” by the robbery and cut their trip short because of it. They were on the island to celebrate their half-sister Alana’s 34th birthday.