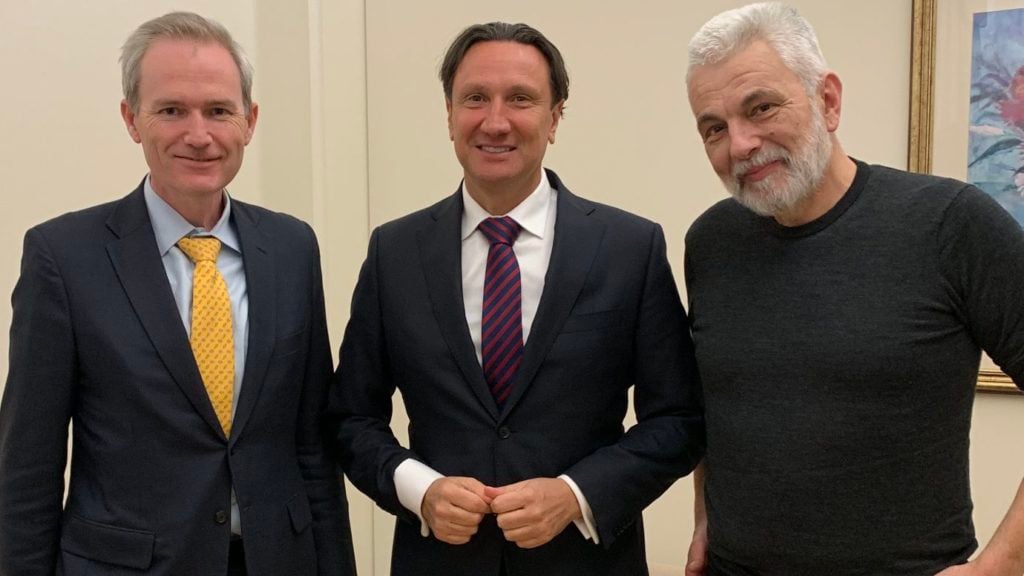 Dialogue between the Australian government and the Greek community took place this week in the framework of building ties and finding ways to best serve the needs of Greeks in Australia.

Australian MP David Coleman, Minister for Immigration, Citizenship, Migrant Services and Multicultural Affairs, invited Greek Community of Melbourne (GCM) President Bill Papastergiadis and Costas Markos to discuss a number of issues of interest to Greeks living in Australia. He noted that the GCM was a very important part of the Federal Government’s ongoing discourse into multicultural issues.

Mr Papastergiadis took the opportunity to bring up matters of interest to Greeks living in Australia. “One of the key issues facing our community is having carers who can converse in the language of the elderly people they look after,” he said.

Mr Coleman responded that the issue is one that needs to be addressed and has made some changes to ease the ability for such carers to be employed. Discussed during the meeting was the revision of regulations related to aged care workers, such as knowledge of English and age limits.

Another issue included language and how it is taught to recent migrants. “Understanding the English language would assist new migrants and refugees into employment and society,” Minister Coleman said. He showed interest in the teaching programmes offered by the GCM and their role in the community, while outlining his vision to expand English classes being offered.

The financial support of English-language teaching programmes for newly-arrived migrants, now offered by large organisations, are to be announced by the end of the year.

Mr Papastergiadis recognised the Federal Government’s financial assistance of $5 million for the Melbourne University Chair and the new centre, an initiative that has received favourable media coverage in Greece and the interest of new Greek Prime Minister Kyriakos Mitsotakis.

Minister Coleman expressed excitement regarding the broad cosmopolitan and multicultural nature of the Chair. He said he had raised the issue in Federal Parliament and that his cabinet colleagues were equally excited by the prospect of the chair which Mr Papastergiadis said that the GCM was focused on ensuring would be of a world class level.

The minister also committed to discussing the creation of the Hellenic Chair of World Diaspora at the School of Culture and Communication at Melbourne University with Education Minister Dan Tehan.

Other issues put on the table were funding opportunities, such as the establishment of the new Greek Community Centre for elderly and young Greeks. Financial support for the Lonsdale Street Greek Festival, which Mr Coleman described as “one of the largest multicultural festivals of Australia”, will be announced next month. At this point, Mr Papastergiadis and Mr Markos did not miss the opportunity to invite Mr Coleman to the opening of the next Lonsdale Street Greek Festival in 2020.

“We are very pleased that the Minister wishes to continue the consultations with large ethnic organisations and we will certainly participate in them. It is important that he discusses directly with us various cultural and educational issues that concern us, while he is expressing his intention to assist, ” Mr Markos said.