Since its establishment in 1902 by Kytherian Strati Notara, it is only the second time it will go under the hammer in over 100 years 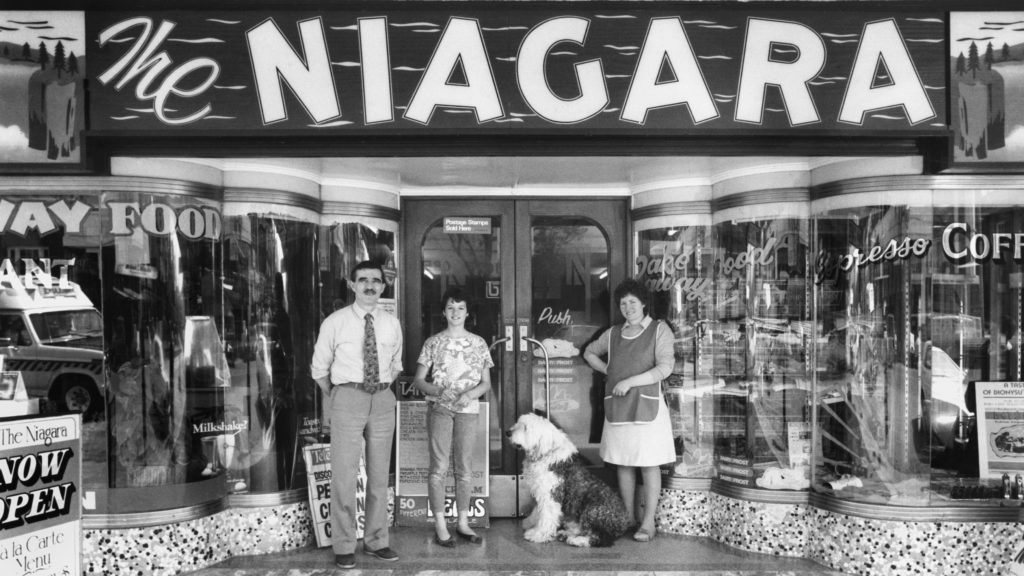 Nicholas, Tina and Denise (Dionysia) Loukissas outside The Niagara in 1986, taken by Effy Alexakis. Photos: Supplied

Australia’s oldest continuously Greek-run cafe, The Niagara is being put on the market, in what will be its second public sale in 100 years.

Established in 1902 in Gundagai, southwest NSW, by Kytherian migrant Strati Notara, the art deco cafe has developed over the years into a cultural icon, visited by a number of famous faces, among them former Australian prime minister John Curtin.

The Castrission family later took over, installing the art deco interior and exterior in 1938, which transformed the eating house into a “pleasure palace”, according to historian Leonard Janiszewski, who together with photographer Effy Alexakis has been documenting Australia’s Greek cafe and milk bar culture.

Now the country’s last traditional Greek cafe is set to go under the hammer.

“There’s a big sentiment to our attachment with the cafe, it’s been part of our lives for so long. It’s sad that we have to get rid of it,” Tina Loukissas told Neos Kosmos.

Now 44, Tina was just eight years old when her parents Nicholas and Dionysia (also known as Denise) bought the cafe in 1983, and made the move from Melbourne to regional NSW, a big change for the young family.

Growing up, Tina recalls spending most of her spare time at the cafe, where she and her brother Tony would work on their school holidays.

“It was kind of exciting because we were in a shop, but I don’t think I realised how special it was because I was so young,” she says.

Tina’s father Nicholas passed away nine years ago, and the cafe had been run by her brother. However since Tony fell ill three-and-a-half years ago, Tina and her mother, aged 72, had been running it.

But with her mother now unwell, and well into retirement age, Tina says the time has come to sell up.

“I think mum’s looking forward to retiring,” she says. “But if my brother hadn’t fallen ill we wouldn’t even be thinking of selling it.”

The traditional Greek cafe is a significant symbol of the Greek community’s settlement in Australia that is recognised both nationally and internationally.

Hailing from Zakynthos, Nicholas and Dionysia Loukissas were among the post-war migrants who worked tirelessly to establish themselves, which was no easy feat.

“Numerous descendants of pre- and post-war arrivals look back in gratitude and sincere thanks to their forbears for the long-hours sweating over a hot stove in a city or rural cafe, for putting up with intermittent racist taunts, for trying to fit in, for the constant consideration and doubt about their choice to migrate to the other side of the world to a foreign land – the cafe was a ‘right of passage’ for many Greeks to demonstrate their ability to work hard and make a new life, a new future, for themselves and their children,” Janiszewski told Neos Kosmos.

“It is a symbol of losing the ‘migrant’ tag and becoming a ‘settler’, an Australian, with a proud Greek background.”

But the impact of this cafe culture went well beyond the Greek community; their entrepreneurial spirit brought about cultural change that was felt by the entire nation. It transformed food catering through the Americanisation of Australian popular culture that stretched beyond food to technology, cinema, architecture and music, highlights the historian.

“The Greek diaspora ensured that American ideas began to flow from the US directly to Australia via Greek migrants who had been in the US, or Greek families in Australia who were corresponding with family members and friends in the States.

“The Niagara Cafe is one of the last traditional Greek-run cafes which were the powerhouses of such dramatic socio-cultural change,” says Janiszewski.

Walking into The Niagara today, it’s like taking a step back in time, with many of its original art deco furnishings still in tact, including American-style bench and table seating, as well as the silver teapots and original plates with ‘Niagara’ stamped on them.

While Tina acknowledges that once a new buyer comes along they can do as they wish with the cafe, she says she hopes they will keep and emphasise the iconic art deco features.

But Janiszewski hopes efforts to preserve the cafe’s historical significance will go beyond that.

“The Niagara is a unique living museum, a living symbol for all Greeks, reflecting on a past, that provided a future,” he says.

“If The Niagara does not attract a sympathetic new owner who can develop a firm commercial business plan, in part, by harnessing its socio-cultural, historical significance, then it is up to not only the local town community, but the Greek and broader Australian community to call upon both Government and private enterprise to preserve (hopefully commercially), the cafe as a symbol of our shared history. We are but the collective experiences of the choices we have made in our past. If we disregard our responsibility to respect the essential symbols and elements of that past (and The Niagara is of national significance), then what have we become?”