From homeland to diaspora: Romioi in Australia 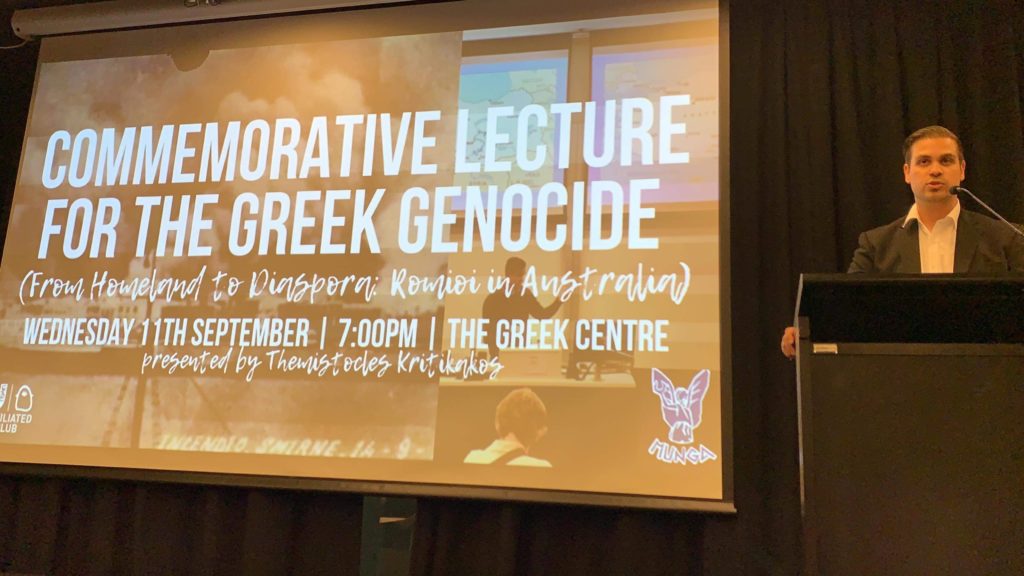 Themistocles Kritikakos gave a lecture on the Genocide at the Greek Centre last week.

In 1998 the Hellenic Parliament recognised 14 September as a day of national mourning for the Genocide of the Greeks of Asia Minor.

The past two decades the Armenian genocide has been extended by scholars to include the lesser-known genocide cases of the Greeks of Asia Minor (including Pontos) and Eastern Thrace as well as Assyrians in the period of 1914-1923 with an estimate of up to 3 million Armenian, Greek and Assyrian deaths in total during this period and over 750,000 Greek deaths.

My research ultimately captures a unique period in the early 21st century in Australia when Greek, Assyrian and Armenian communities co-operated in a bid to attain genocide recognition. The lesser-known genocide narratives of Greeks, a case of historical amnesia, have been traditionally overlooked by scholars and gained little to no political recognition.

Ultimately, I am investigating the transmission of trauma across generations in my research and attempt to understand how subsequent generations deal with this trauma and the impact these memories have on individuals, families and communities living in Australia.

On April 24, 1915, up to 270 Armenian intellectuals and leaders were arrested in Constantinople and this is considered to be the beginning of the Armenian genocide. The following day the ANZACs landed in Gallipoli. Gallipoli coming from the Greek word Kallipoli, meaning beautiful city, was an ancient Greek city located in Eastern Thrace, where up to 32,000 Greeks lived prior to the ANZAC landing.

There is a different meaning of Gallipoli represented in more recent times in diasporic memory. A Greek Australian of Eastern Thracian heritage stated “the world knows Gallipoli for something very different other than the Greek genocide. I think I started understanding Gallipoli as having a Greek connection when I first started going to Greece as an adult. My schooling here in Australia was through the 1960s and 1970s and Gallipoli, the way it was taught in schools then meant something very very different to anything that was Greek. It was all around the ANZACS. In many respects they should have a significant part in it as well but it is not all of it. I knew very little until I started going to Greece.”

This provides a different understanding of Gallipoli and Eastern Thrace more broadly as a site of not only the Gallipoli campaign, but one of violence and deportation for Ottoman subjects such as Greeks and Armenians.

On May 19, 1919, Mustafa Kemal, later known as Ataturk, meaning the father of the Turks, led the Turkish nationalist movement in Samsun, Pontos during the Greco-Turkish War. It is considered for many Greeks as the “beginning of the second and most brutal phase of the Greek genocide”. For the Greeks of Pontus, it is an annual day of mourning.

The Catastrophe of Smyrna, otherwise known as the Great Fire of Smyrna, was the burning of the Greek and Armenian quarters of the city of Smyrna when up to 100,000 Christian Greeks and Armenians perished four days after Kemalist forces reached Smyrna. Up to 21 Allied battleships in the harbour of Smyrna were instructed to remain neutral and therefore did not intervene, only rescuing their own nationals. Smyrna, a cosmopolitan and multi-ethnic city was destroyed.

The stories of trauma and survival echo in the Greek Australian community. A Greek with ancestry from Smyrna, recalled his father’s attempt to escape

“There was a ship. They swam close to it. They asked the British to save them. They asked what are you? He responded, Greek. He was escaping by hiding near the bottom of the ship. The Englishman on the boat had an axe ready to cut their hands if they were to come onto the boat. They didn’t want them…”

The Catastrophe of Smyrna led to the formation of modern-day Turkey and with the Treaty of Lausanne in 1923 came a population exchange where up to 1.5 million Christians from Turkey were transferred to Greece and up to 500,000 Muslims from Greece were transferred to Turkey.

A Melbourne-based Greek whose maternal grandparents came from Smyrna, recalled how they educated, held in high esteem in Asia Minor but struggled in Greece where they faced discrimination. She stated “can you imagine these people coming to Greece and being destitute, having absolutely nothing, losing children in the process, losing husbands or wives, and being considered as tourkospori. In other words, these people, their seed, their inception was Turkish and not Greece and this is not true..”

Unlike the Armenian genocide, which is the main cultural trauma for the Armenians, there were multiple traumas that led to the forgetting of the events that transpired in the late Ottoman Empire for the Greeks and Assyrians. For the Greeks it included the traumas of the Second World War and the Greek Civil War. For the Assyrians it is their on-going plight in the Middle East as a stateless people who have faced several instances of genocide the past century.

Memory transcends time and place. The first generation usually didn’t speak about what happened due to the horrific events they witnessed. The second generation didn’t enquire about what happened dealing with other traumas or settling into a new country such as Australia. However the third generation, which was more settled, started questioning. They started to connect with a neglected history.

The events that transpired in the late Ottoman Empire affected the broader community of Asia Minor Greeks in Brisbane who first migrated to Australia in the 1920s. A Greek-Australian with heritage from Alatsata, in the province of Smyrna, recalled her father’s testimony. He was a child and remembered how the women and children were separated from the men and transferred to a church where they were kept for days without knowing what would happen next. She stated that “every night the soldiers would come in and would search for pretty young girls, and they would take them into the altar, the holiest place and rape them”. He had witnessed at the front door of the church the piles of dead bodies. She recalled how she returned with her father in his old age to visit his childhood home and school and after visiting that same church, he had re-lived the trauma he experienced. Her father started to cry and shake so they had to cut their trip short and leave.

READ MORE: “Greeks. Romioi. Greek Australians” on display – Who are we now?

An individual who is considered a hero around this time was Kalomana who was from Smyrna and lived in Brisbane. She helped the refugees from Asia Minor who settled in Brisbane in the 1920s, where she supported them to start a new life in Australia. She has been described as “their unofficial social worker” and also played an important part in setting up the church and community. In Brisbane, the Asia Minor Historical Society runs an annual lecture named after Kalomana in her honour.

In more recent times research has shed light on the historical Australian humanitarian response to genocide survivors and refugees at the time, which Greek, Assyrian and Armenian community members commemorate.

An Australian figure deemed a hero in the Greek Community is George Devine Treloar, Australia’s First Commissioner for Refugees, who helped re-settle over 100,000 Christian refugees from Asia Minor including Pontus as well as Eastern Thrace in Western Thrace and Macedonia in Greece, arranging food, shelter and medical assistance.

The narratives of heroism and survival play out in landscapes such as Ballarat where Treloar originates from, and Thyrlorion in Western Thrace which was named in honour of Treloar.

The three communities have made use of these narratives and Greek, Armenian and Assyrian survival has become intertwined with Australian humanitarianism.

The Assyrians, an indigenous and Christian people who are stateless, are still persecuted in the Middle East in what they describe as an ‘on-going’ genocide. The current plight of Assyrians facilitates new narratives of solidarity, a plight some Greeks are empathetic toward “because they didn’t leave them a state. They still don’t have a state”.

The three groups have formed new narratives to consider the plight of other victims of genocide expanding the understanding of legacies of genocide, for instance, at commemorations on 9 December, which is the United Nations Day of Commemoration for All Victims of Genocide and Atrocity Crimes.

Through cross-referencing, cooperation and dialogue, Greeks along with Armenians and Assyrians have created a shared narrative of a plight that occurred “to the same people”. At the same time, each group embraces their own narratives, their own experiences and memories. Co-operation is an on-going development and memories are in constant negotiation.

In the case of the Greeks of Asia Minor (including Pontos) and Eastern Thrace, subsequent generations deal with the traumas of their ancestors and for this reason many are active in commemorating these events in a communal context and seek to find their place in Australian history, trying them with their Australian identity. Some deal with these traumas at a personal level by maintaining a cultural connection and passing down memory in the family context. Others would rather forget or not engage with the traumas of the past. However there are those active in seeking to attain genocide recognition in order to “heal wounds”.

* Themistocles Kritikakos is a PhD Candidate at the University of Melbourne.