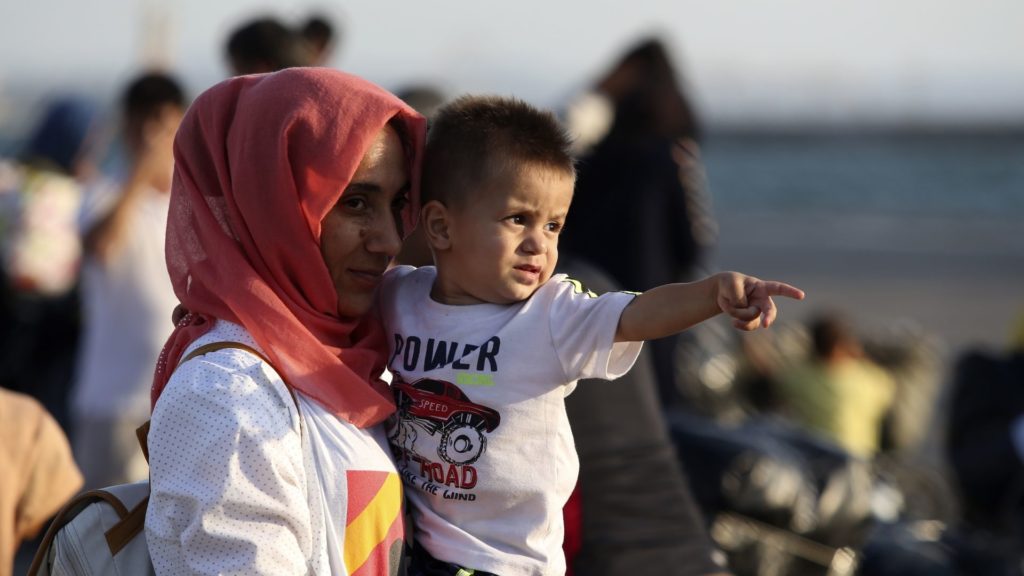 A migrant holds a boy upon their arrival at the port of Thessaloniki, northern Greece in September. About 1,500 asylum-seekers were being transported from Greece’s eastern Aegean island of Lesbos to the mainland as part of government efforts to tackle massive overcrowding in refugee camps and a recent spike in the number of people arriving from the nearby Turkish coast. Photo: AP Photo/Giannis Papanikos

The hotspots on the Greek islands of Lesvos, Chios, Samos, Kos and Leros are struggling to manage an increase in the number of refugees and migrants crossing the Aegean Sea from Turkey in recent months.

Between January and August 2019, 25,590 people arrived by sea on the Greek islands, according to UNHCR. In August alone, 7,712 people arrived, more than double the number in the same month in 2018.

Arrivals have increased as conditions for refugees in Turkey, and a change in attitude towards those from Syria in particular, have led to more people leaving the country. This trend is likely to increase. In early September, Turkey’s president Recep Tayyip Erdoğan threatened to open the borders and allow more refugees to cross into The European Union unless Turkey gets more international support for a plan to establish “safe zones” in Syria.

Officials from Greek Prime Minister Kyriakos Mitsotakis’ New Democracy party, who formed the new Greek government in July, have spoken about their intentions to avoid a situation like 2015, when more than 850,000 people entered the asylum process in Europe by travelling through Greece. They are putting in place new measures intended to reduce the number of refugees making the journey from Turkey. This has included new patrol boats in the Aegean and a collaboration between the Hellenic Coastguard and Frontex, the EU’s border agency, using a zeppelin to survey the maritime borders around Samos.

Since New Democracy came to power in July, the government’s rhetoric towards refugees has become harsher. In particular, there’s been increased police activity in the Exarcheia district of Athens in recent weeks, with a number of squats housing refugees evicted as part of a pledge to ‘clean up’ and ‘bring order’ to the area.

Against this backdrop of government change and increased hostility towards refugees the numbers of people arriving on the islands have also led to a sharp decline in living conditions. One week in August saw more than 500 arrivals on Samos, where the Reception and Identification Centre (RIC) was built for 650.

The RIC was already bursting at the seams, with estimates for the total population at more than 5,500. While there had been an increase in transfers to the mainland earlier in 2019 due to terrible winter conditions, the number of people has increased again and the conditions they are forced to survive in have only gotten worse. Reception centres on Lesvos, Chios, Kos and Leros are also severely overcrowded.

Stories coming from the Moria RIC on Lesvos tell of a horrifying situation in which people are sleeping in any space they can find with no tents or proper shelter and only very light blankets or sleeping bags to protect them. In August 2019, more than 10,000 people were living on the island, further consolidating issues of provision, mental health problems, attempted suicide, and very limited resources to support those suffering from trauma.

The struggle on Samos

On Samos, where I last visited in July, new arrivals are no longer shown to an allocated space in either a tent or a container. Instead, they have to find a tent for themselves, either by visiting Refugee4Refugees, which distributes them on the island when it has enough donations, or by buying one themselves in town.

Next, they have to find a space to erect the tent in ‘the jungle’, which surrounds the official boundary of the reception centre. Tents sit in surrounding olive groves, among the rats, snakes, rubbish, and human waste. Those staying here have very little access to piped water. They rely mainly on the 1.5 litres of bottled water they are provided with, for which a long queue is required, or the support of voluntary organisations such as Samos Volunteers, We Are One and Banana House who always have water, tea or lemonade available for the people using their centres.

Access to piped water has become a serious problem and there were reports of shortages throughout the summer. Temperatures soared into the 30s when I was on Samos and staff from the NGO Médecins Sans Frontières told me of their concerns about dehydration. On Chios there are reports that piped water is only available a few hours a day, and of provision of only one bottle of drinking water per person a day.

Worries about food and water led to the opening of a new NGO on Samos in August, Project Armonia. Its restaurant is now providing 450 nutritious meals a day for the most vulnerable refugees, filling a vital gap on the island. Being served food with dignity is a welcome break from the endless queuing – between two and five hours – that it can take to get food from the RIC. As the Project Armonia team told me, at the end of the day everything on the island ‘comes back to food and water’.

As autumn turns to winter, the islands face another crisis. The number of volunteers often falls in the winter months as students who the NGOs partly rely on for support go back to their studies. This is of particular concern this year as the number of new arrivals to the islands over the summer months has been so high and NGOs fill vital gaps in providing food, clothes, shelter, education, as well as legal and other types of support.

To alleviate the immediate crisis more support needs to be given to improve the speed and transparency of the asylum process. More people also need to be transferred off the islands – not into equally overcrowded camps in mainland Greece, but into sustainable housing solutions across Europe. To achieve this, countries both inside and outside the EU need to take greater responsibility for meeting their humanitarian duties.

* Gemma Bird is a lecturer in Politics and International Relations at the University of Liverpool. This article first appeared in The Conversation.