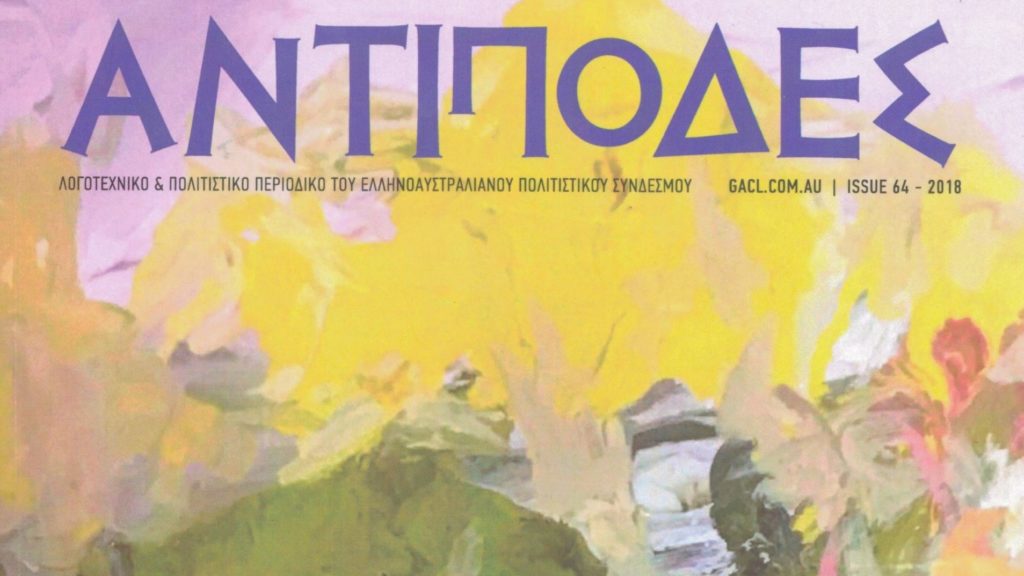 The Antipodes periodical is in its 46th year.

The Greek-Australian Cultural League (GACL) of Melbourne will launch its bilingual periodical, Antipodes (Issue No 65), at 3pm on Sunday, 13 October, at the Pontian Community of Melbourne and Victoria.

Dr Stephie Nikoloudis, lecturer and coordinator of Greek Studies at La Trobe University will present the periodical of the GACL, a group established in 1970 by a group of young, dedicated and visionary men and women whose love of the Greek letters and culture bore fruit in the creation of an Association that promoted and supported the creative endeavours of artists and writers of the diaspora.

Over the years it has featured works by Greek-Australian writers and artists in either English or Greek. Their contribution has been crucial in the maintenance of Greek culture and literature. Every year the periodical is dedicated to a well-known person in the Greek-Australian diaspora who has contributed to the promotion of the Greek letters or the Greek culture in various ways.

This year the periodical commemorates 50 years since the establishment of the GACL.

The results of the 2019 Literary Competition, which attracted Greek and English works of writers of Greek origin residing in Australia will also be announced.

Refreshments will be provided, and everyone is welcome to attend.

Where: The Pontian Community of Melbourne and Victoria (345 Victoria St, Brunswick)