The crowd in the stands of the Olympic Stadium was chanting the national anthem as Greece dominated Bosnia, with the slim 2-1 win 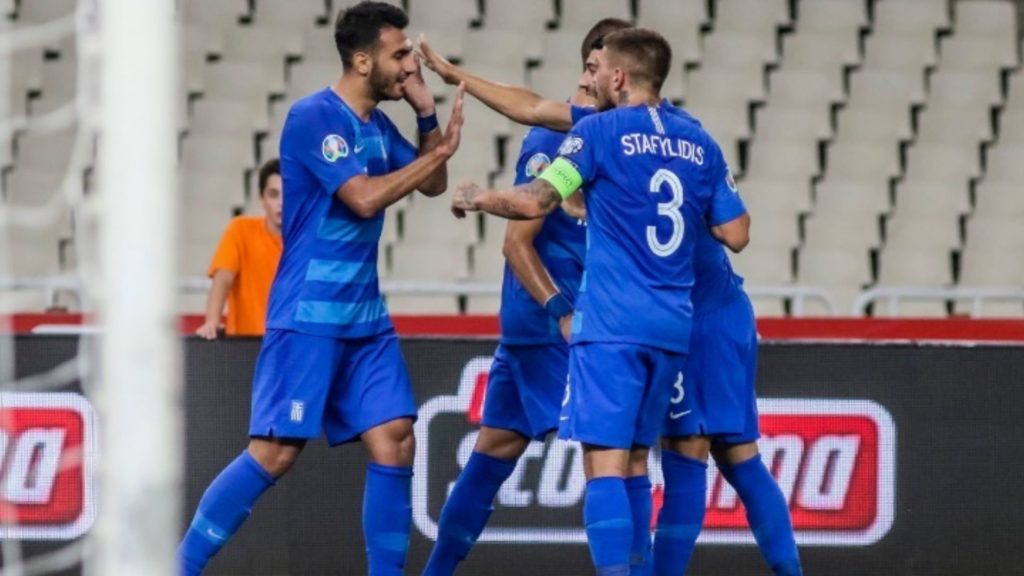 Things are finally starting to look up for the Greek national team! Photo: APE/MPE

The first few signs of the Van’t Schip era are more than positive for the Greek national team.

A few short days after the decent showing at the Olimpico of Rome against four-time world champions Italy (that saw the Greeks lose by a narrow 2-0), this time the Dutchman’s side took on second favourites for the group, Bosnia and Herzegovina.

The visitors were in dire need for a win, as a possible loss or draw would see the gap between them and Finland grow even bigger, leading them to miss out on the Euro 2020 finals.
Yet as the teams appeared on the pitch, one would think that is was the Greeks who were the desperate ones.

Van’t Schip and his associate (and former South Melbourne star) Michalis Valkanis decided to give some game time to a few of the players who didn’t get a chance to play against Italy, such as Dimitris Giannoulis, Kostas Galanopoulos, Petros Mantalos and Vaggelis Pavlidis.

They rewarded him by taking charge of the game from early on, leaving no room for the opponents to create any threat as they had tightened their back line.

The speed with which the young Greek team traded the ball up front seemed to have caught the Bosnian side by shock, as they didn’t seem to be expecting this sort of resistance by a Hellenic side who had been underperforming for a while now, dropping points even against the likes of Liechtenstein.

Greece kept its high profile opponents under constant pressure and created several opportunities to score a goal in the first half.

One of them ended up in the back of the net, when Vangelis Pavlidis moved wonderfully inside the area, dribbling past his personal marker to open the score for the home side right on the half hour mark.

But Bosnia will always be a dangerous side and they showed that five minutes later when they made perfect use of what was possibly their only true chance in the encounter.

Sead Kolasinac made a low cross from the left, with Amer Gojak getting ahead of Pantelis Hatzidiakos to equalise for the visitors.

The two teams went into the break on level terms, yet the Greeks came out for the second half with their foot on the pedal.

Van’t Schip made some adjustments, replacing a tired Mantalos for a more deadly Giorgos Masouras, with the Olympiacos winger wasting several chances to score.

On the 75th minute, Kostas Stafylidis’ left-footed rocket from wide bounced off the post.

Dimitris Limnios was a constant source of threat for the Bosnian defence, yet in a surprise change, the Dutch manager decided to take him off for Giannis Fetfatzidis.

He was rewarded for his daring decision just a few short minutes before the end of the game, with the Aris winger taking full advantage of a counter attack and making a low cross that defender Adnan Kovacevic attempted to clear, only for the ball to end up in the back of his own team’s net.

Speaking to journalists after the game, the former Melbourne City gaffer pointed out that he’s no Harry Potter, yet he will continue to work as hard as he possibly can in order for the Greek people to be able to feel pride for their national team once again.