Those funny little notes and the story behind them

Who doesn’t love those sweet little notes that our mothers and grandmothers used to leave for us on the kitchen table letting us know their whereabouts in the most unique Greeklish way? 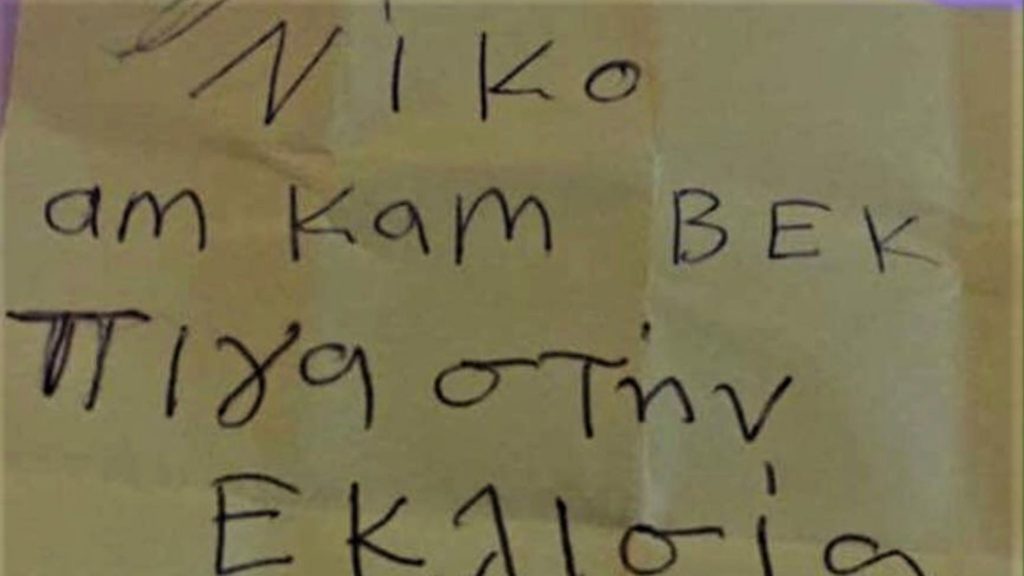 Who doesn’t love those sweet little notes that our mothers and grandmothers used to leave for us on the kitchen table letting us know their whereabouts for the day in the most unique Greeklish way?

Though who can deny that those – almost illegible – notes were also an indication of the changes and challenges, our parents, the Early Greek Australians had to overcome after moving to another country and trying to adjust to a new reality?

“What do my mum’s funny little notes mean to me? Probably the world,” says 56-year-old Helen Beagle, whose parents migrated to Australia in the 1950’s and made a habit of leaving those legendary Greek Aussie notes scattered around their home for their children to read.

“I remember when I was younger, I used to tell my friends that my mother spoke her own language that only her family could understand. Luckily I attended Greek school for six years so I was able to read the notes she would leave for me, but I must admit, occasionally I would have to go back and read those little messages over and over again scratching my head trying to work out what on earth she was trying to say. It was like a challenge, a bit like a puzzle, but I would eventually get there,” says Helen whose mother was born into a wealthy Greek family and spent her younger years working in Alexandria, Egypt as a seamstress.

She migrated to Australia in the 1960s.

Although she spoke Greek and Italian, a language she learned from her three Italian colleagues, Helen’s mother was never keen to learn how to speak English.

“After I was born in 1963, my mother’s logic behind not wanting to learn was that she was out of the workforce and surrounded by Greeks therefore she didn’t really see the benefit in speaking another language other than Greek. She was happy to just get by and to this day, well and truly into her 80s she still speaks to her grandchildren in Greeklish, sparking many hilarious joyful moments with the words she makes up and the mistakes she makes when she tries to tell them a story,” continues Helen whose father on the other hand had a completely different experience coming to Australia.

“My father’s journey down under was not an easy one. He came from a poor family and as the eldest son he was the one that had to work and send money back to his parents and siblings in order to survive.”

The young man made it to Melbourne and then onto his final destination of Moe, country Victoria, where he worked in an open cut coal mine. He would work by day and attend English classes at night as he found it extremely hard to communicate in a different language.

“He once told me a story of the first memory he had of those days. He wanted to buy honey and would have to mimic a bee flying and stinging so he could get the message across.

“Looking back, although my father said it was kind of funny at the time, particularly for those watching, I can’t help but feel sad about all the things our parents had to go through in a foreign and at times unwelcoming country,” says Helen admitting that throughout the years her parents experienced a certain level of adversity and racism.

“I feel blessed I was born in a Greek Australian family and I am forever grateful for all that our parents did for us and for the fact that our ancestors have gifted so much to the world; from democracy and philosophy, to medicine, politics and arts.

“As for those notes, looking back, I wish I could have kept them all.

“They really are so incredibly special,” concluded Helen.