If you like Greek songs, especially those of your parents’ and grandparents’ generations and have a flair for understanding the lyrics, check out Chris Macheras’ Instagram page.

The Melbourne-based lawyer-by-day artist-by-night has recently discovered a creative outlet combining his passion for Greek music and talent for drawing.

“I was sitting at my desk and, as always, listening to Greek music which tends to be more therapeutic for me.

READ MORE: Those funny little notes and the story behind them

I was listening to Ρολόι Κομπολόι […] drawing a watch and a kompoloi and then just started thinking “this would be a cool idea if I would just put down some lyrics as well’. The 30-year-old launched an Instagram page with his artwork (greeksongdrawings) a few weeks ago and already has a three-digit number of followers, most of them from the diaspora communities in Australia, US and the UK, as well as from Greece.
Artists Glykeria, Natasa Theodoridou and Nino Xypolitas have also got in touch with him praising his work or even asking for a personalised drawing on one of their songs.

Naturally, part of the credit goes to his family too, who initiated Chris in the musical tradition. 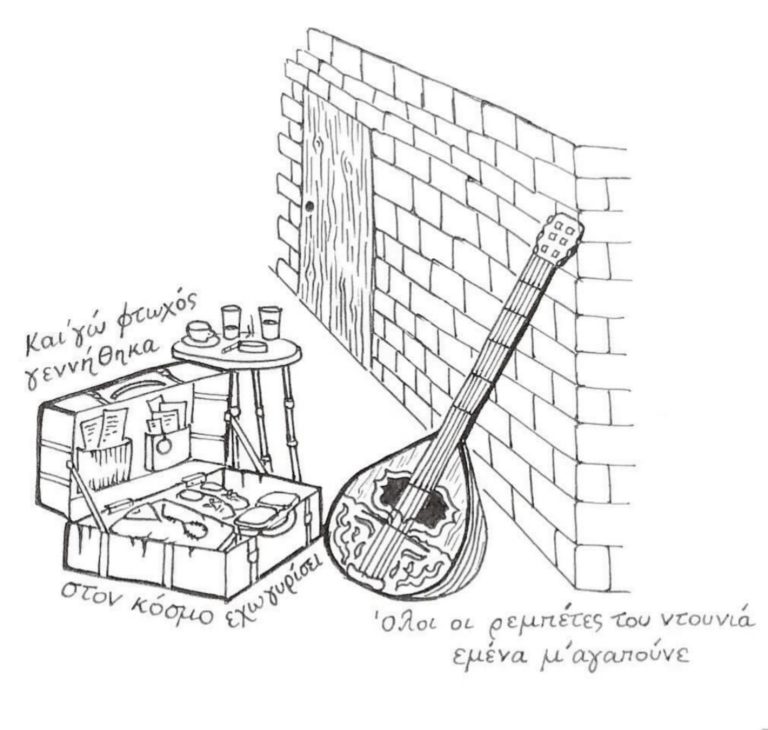 “I think it was more thanks to my yiayia and pappou who raised me too with my parents working. We’re a very proud Greek family and a very musical family too. My pappou, who recently passed away, was playing the bouzouki and I played it for a bit as well.”

Family gatherings and attending traditional weddings from a young age exposed him to different music genres, but as Chris recalls a Greek school session where students were asked to analyse Stelios Kazantzidis’ song Βράχο βράχο τον καημό μου made him realise that he is drawn more by songs talking about the migrant experience. “I like all kinds [of Greek music really], but I love the sort of music that pertains to μετανάστες,” he notes, “but newer stuff too, even those songs that have a παραδοσιακό feel.”

Chris has developed a solid association with the Greek community over the years, having also served in the National Union of Greek Australian Students (NUGAS) Victoria Committee. Through this lens, he describes his new artistic venture as a great medium for fellow Greek Australians and their children, in efforts to preserve the language.

But above all it’s a platform for engaging with Greeks around the world who share the same love.

“There’s so many Greeks and music is universal but it’s also something very personal and very important in our culture and I think it ties us all together. I’ve got people from all around the world sending me requests and it just shows […] that wherever we are in the world we can be connected through Hellenism.”