In a highly entertaining showdown, the team from Piraeus managed to seal an all-important win against their rivals thanks to a goal in either half by Ruben Semedo and Mady Camara and are now eight points ahead on the ladder 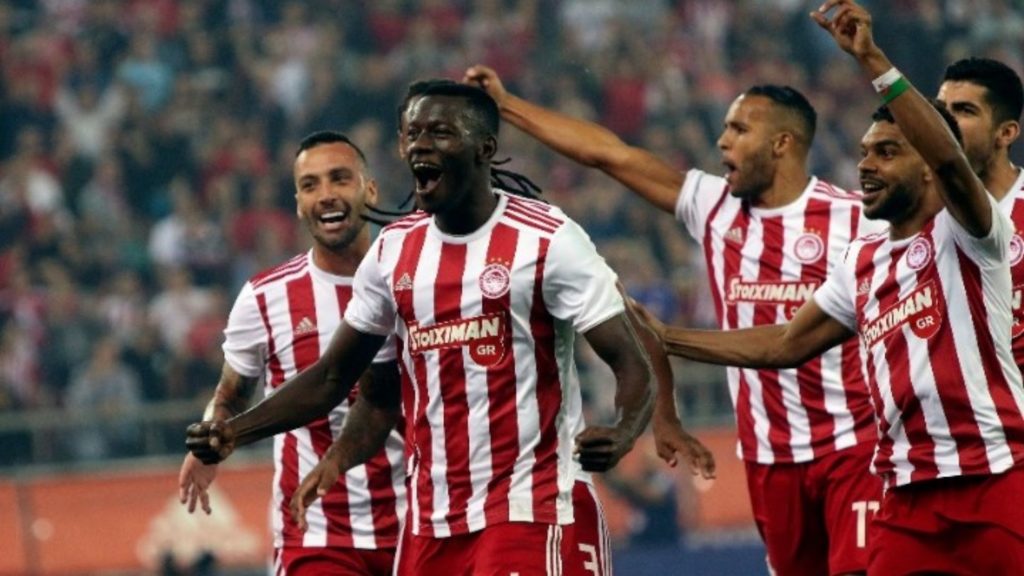 Olympiacos defeated AEK 2-0 at the Karaiskakis Stadium for Round Eight of the Greek Super League One.

In what was easily the most outstanding game of the schedule, all eyes were glued to the stadium in Faliron for what may have been one of the most crucial games of the regular season.

The home side was just two points ahead of PAOK in the race for the first spot, while Nikos Kostenoglou’s side had fallen behind and needed the win in order to catch up with their rivals.

On the other end, AEK’s Greek coach chose to play with Nelson Oliveira and Marko Livaja up front, with Christos Albanis and Milos Deletic helping from the sides.

The game began with Olympiacos attempting to take the reins from early on, but AEK put up a strong resistance.

An early shot from Mady Camara who was set up by Daniel Podence was sent out for a corner by goalkeeper Tsintotas.

After the set piece was taken, the AEK defence was unable to get rid of the ball, with El Arabi finding Soudani in the box. He made a low cross at the right moment to the feet of the oncoming Semedo who was still in the area and tapped the ball into the back of the net to set the Karaiskakis ablaze.

The visitors attempted to respond and had several good opportunities to equalise through Oliveira who made life difficult for the Olympiacos team’s defence, but Jose Sa always came up with the right response.

And just when AEK were looking the most likely to find the equaliser, it was the red-and-whites who found the second goal after a mix-up in the defence between Ognjen Vranjes and his goalkeeper Tsintotas, with El Arabi stealing the ball and putting it in the back of the net.

But AEK were saved thanks to the VAR, as referee Jorge Souza decided that there was a handball by Guillherme earlier on.

The two teams went into the dressing rooms with Olympiacos in the lead and looking comfortable as they held off their opponents.

Not a lot changed following half time, with Nikos Kostenoglou introducing Daniele Verde in the place of Deletic to give his team more strength in the last third of the field, while Martins responded by changing the tired Soudani for Masouras to force more errors out of the AEK defence.

The visitors tried to unlock the defence of Olympiacos but every time the Piraeus side broke on the counter, they seemed likely to score. And it was always with the same two players, as Podence set up Camara on multiple occasions, with the Guinean attempting to put the ball past Tsintotas with his powerful shots from outside the area.

He succeeded with his third try on the 77th, putting the game to rest and the three points in the bag.

After that, it seemed all resistance had died down by AEK and it was all just a matter of the game ending.

This result kept Pedro Martins’ side at the top of the table, two points clear of PAOK who beat Volos 0-2 in Thessaly thanks to goals by Limnios and Pelkas.

Aris also continued on the winning path, as they beat Panetolikos at home 2-0 thanks to a couple of successfully converted penalty kicks by Bruno Gama and Brown Ideye, while OFI also extended their winning streak by beating Xanthi 2-0 at home, with goals by Figueiredo and Nelson Semedo.