The Cypriot was recently transferred to Canberra United after a successful stint at Apollon Limassol, while she maintains her hopes of one day playing for the Matildas 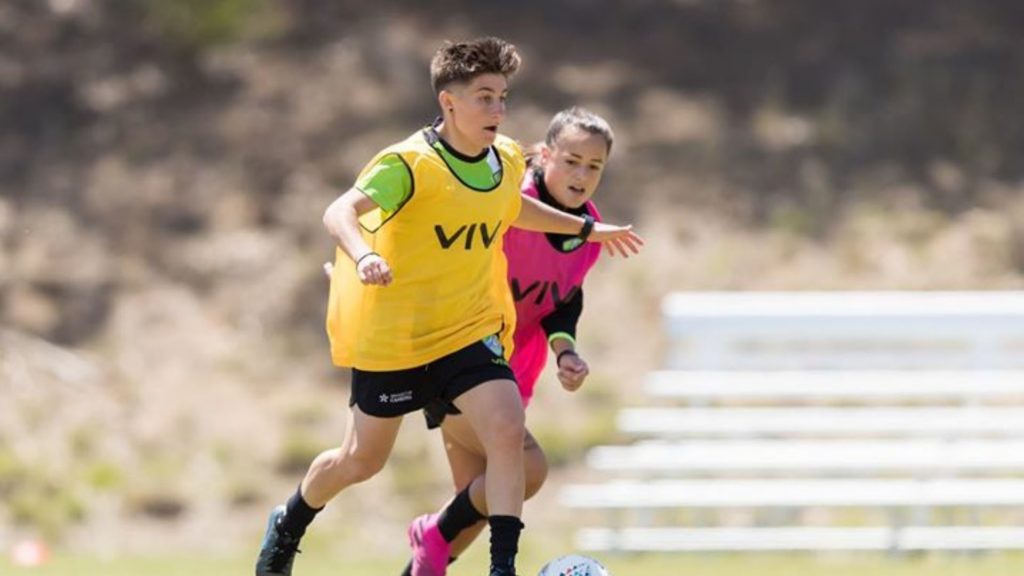 The 25-year-old left-back will be looking to help her team achieve its goals. Photo: Supplied

At 25 years of age, Patricia Charalambous has already managed to establish herself within the field of women’s football.

It was clear from the outset that she would follow in her the footsteps of her dad Nearchos Charalambous, former Nicosia’s football club APOEL player.

At the age of 18, she managed to become one of the few Australians to represent the nation in the highly esteemed UEFA Champions League, playing for the Apollon Limassol women’s team.

“It was a different experience. I’ll never forget it. I was there when I was 18 and then again last year,” she says about her Cypriot journey.

“It sounds weird when you say it like that but I was so young, I was pretty much like a baby when I played in the Champions League. I think the girls playing in Australia start off really young and being 18, playing in such a big competition, is pretty crazy when you think about it. And I’m so grateful for the opportunity that I got.”

She went on to play for Perth Glory, participating in the 2017 W-League Grand Final as a substitute, with her team losing the game 0-2 to Melbourne City. This time, she hopes things will play out a little differently and, speaking to Neos Kosmos, her optimism is evident. “I feel good being back home with my family and being able to have the opportunity to play in the W-League for the season 2019/20,” Charalambous says.

“My goal is just to have a great season, to accomplish all the things I didn’t in my first year, to improve my game time and my individual performance, but most importantly, we also want to achieve something better as a team. I’m so happy to be a part of Canberra United and we’re just focusing on ourselves this year, not worrying where we’ll be placed on the ladder. We want to focus on ourselves and build our character and that’ll show in our results.”

When it comes to her own personal ambitions, playing for the Matildas ranks pretty high on her list as she describes a potential call-up as a ‘dream come true’.
“A lot of people ask me ‘why don’t you go play for Cyprus?’, I have that opportunity but I was born and raised in Australia and I would love to play for my own country one day. If I ever get the chance to, I would consider it to be an incredible achievement of mine.”

Of course, she couldn’t help but remark on the recent developments regarding women’s football and the equal pay deal for all members of the Matildas and Socceroos that was announced by the Football Federation of Australia (FFA).

“It was a great day for women’s football. I know the Professional Footballer’s Association (PFA) have been working very hard the past few years to bring us to this point. They’re working close with the FFA to do so, and it’s incredible that we are where we are right now. We’re still not at the end goal for the women’s game here in Australia, but it’s great to get the people behind us right now. Unfortunately these things do take time and it’s a shame that this wasn’t happening five-ten years ago. But the game’s grown a lot in the past few years in both the W-League and the Matildas, and it’s just incredible that each season we’re getting better and better.”

When asked about what advice she would give to a young girl who is just know taking her first steps in the grassroots, the young left-back reflects on her own personal career.

In closing, Patricia sends her message to the Greek community, as she reminisces about her early football days.

“I would love to sign off with a Greek quote but I don’t speak much Greek. When I was young, it was either you go to football training or you go to Greek school.

So I went to training cause they were both on the same night. I know there’s a lot of Greeks in Melbourne and there’s quite a few Greeks that play for both Victory and City, so it would be great if we can get some more members of the community coming to the games, supporting our culture and the girls behind it that represent us. It would be awesome if they could come to the games this year, say hello to us and watch us play, since we do play good football, us Greeks (laughs). It would be fantastic to get the community out there, we’d love to meet everyone!”