Road to Remembrance: Private Basil Passa of Kontopouli, the ANZAC of Lemnos

Honouring the service of Private Basil Passa of Kontopouli 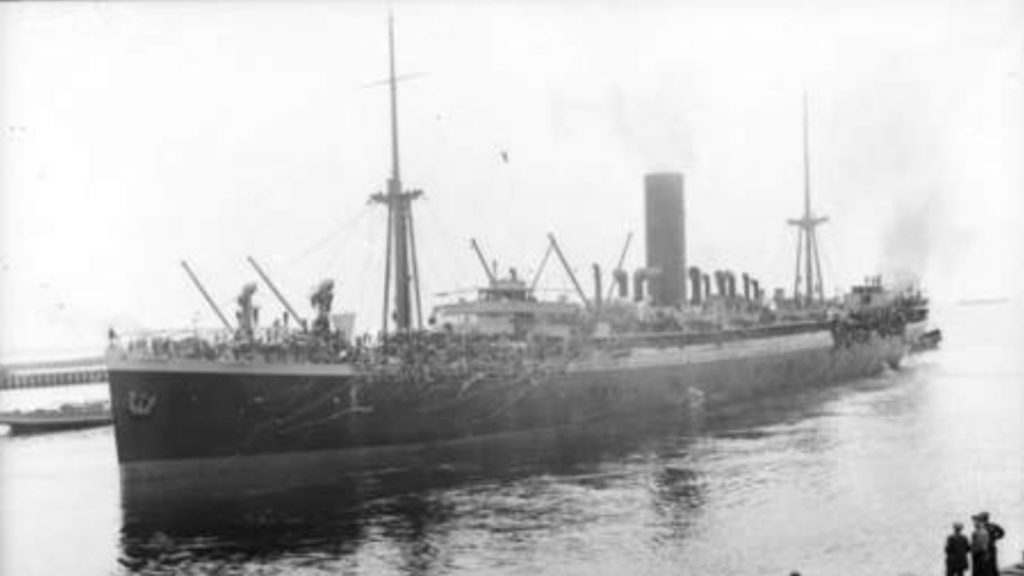 The troopship Aeneas departs from Port Melbourne’s Princes Pier on 3rd October 1916. Basil would have been on the ship. Photo: AWM

Egypt was long a place of emigration for Hellenes seeking a new life. Throughout the early twentieth century – and even before that – they came from Kavala and other cities on the mainland and across the Islands of the Aegean. The migration was such that regular transport ships sailed from Lemnos and other Islands to distant Alexandria.

One of the villages on Lemnos with a unique connection to Australia is the north eastern village of Kontopouli. It was here that one Basil Demetri Passa was born in April 1874, a new addition to its small population of around 280 souls. Young Basil was born into a Lemnos governed by the Ottoman Empire. Some years later, Basil was married to Rosa and was living in Egypt’s Port Said.

He later moved to Australia – no doubt to seek advancement – leaving his wife behind in Port Said. This was not unusual for many migrants, one family member going to the new land first to establish a home and then sending for his family. Basil was an educated man, finding work as an interpreter in the bustling pre-war city of Sydney. We can assume that he learned English during his life in the Levantine world of British-administered Egypt. He lived in Palmer Street, East Sydney and became a naturalised British subject.

We don’t know much about his life in Sydney. But, working as an interpreter, it is possible that he may have known many in the local Hellenic community, helping out new migrants as they sought to negotiate their new lives in an English-speaking world. He may even have helped one Peter Rados, a new Australian from Artaky in Asia Minor.

24-year-old Peter lived in Sydney at the then-Panellinion Club at 37 Park Street run by a Mr Jack Zervos. He worked as a cook when he enlisted into the AIF’s 3rd Battalion on 18 August 1914.

Basil joined Peter and many other Hellenes who volunteered to serve in the Australian Imperial Force (or AIF) in the First World War. He joined up on 7 February 1916 as a Sapper or engineer with Australia’s Field Engineering units. He sailed for England and ultimately France, leaving Sydney aboard the aptly named Aeneas – after the mythical Trojan warrior from the writings of the Classical Roman writer Virgil – on 30 September 1916.

The Aeneas would have sailed across the warm seas of the Indian Ocean and on through the Suez Canal, calling in at Port Said – the home of his wife, Rosa. I wonder if Basil was able to take some leave and re-connect with his wife in Egypt. We may never know. Whether he was able to leave the Aeneas or not, Basil was soon sailing across the Mediterranean, continuing his journey to the war.

After training in England, Basil arrived in France in March 1917. As an engineer Basil and his unit would have been attached to an Australian Division, preparing the ground for future attacks and building roads, bridges and trenches. Close to the front, he would have been subjected to enemy shell-fire. Many engineers were killed and injured. Basil was eventually discharged due to ill-health, returning to Australia in December 1917.

For his service to Australia, he was awarded the 1914/15 Star, the British War Medal and the Victory Medal. We don’t know what happened to Basil after his return to Australia. It is entirely possible that Basil would have sent for wife to join him, as many migrants did, after having established his life in Australia.

A few years ago, I walked the streets of Basil’s Kontopouli accompanied by Christina Despoteris. Not only is Christina the Vice-President of the Lemnos Gallipoli Commemorative Committee, but her own personal family journey mirrors that of Basil all those years ago.

READ MORE: The day the Germans marched on Lemnos

Christina’s family left Kontopouli for a new life in the then great multicultural city of Alexandria, with its thriving Hellenic community. By 1940, there were some 25,000 Hellenes living across Egypt. Christina was born and educated in Alexandria, her father one of the 6,000 Hellenes serving with the Allied forces fighting against the German and Italian forces in North Africa. She has many lovely memories of life in Alexandria – its beaches, its churches and schools and most of all its Hellenic community. Later the family would move to Australia and a new life.

Christina guided me through the lanes and streets of the village, admiring its grand houses – some having seen better days – and the ornate doorways. One of main churches of the village stands testimony to the success of those who left for Egypt. The Church of Agios Dimitrios was built with funds donated by Emmanouil and Despina Dimitriadis, a family of merchants form Alexandria. Another prominent Alexandrian Hellene was George Averoff who amongst many donations to Greece was the Greek battleship named in his honor that would liberate Lemnos and many of the Aegean Islands from Ottoman rule in October 1912. And in common with many villages in Greece, the main square has its war memorial. But sadly there is no mention of Basil Passa.

Another Hellene living in Australia tried to enlist during the First World War. He was also living in New South Wales and had been born amongst the Hellenic community in Egypt – of Lemnian parents! He was Peter Vakirudis. The 18 year old labourer from Culcairn in the south-eastern Riverina fronted the AIF recruitment office at Albury in May 1918. He recorded his birth, his Greek Orthodox religion and the fact that his next of kin – his mother Aristor – lived on distant “Lemnos Island”.

So here was Lemnos, the advance base for the Gallipoli campaign throughout 1915, whose people had accommodated the arrival of tens of thousands of Allied soldiers including the Anzacs, with this deep connection to Australia’s Anzac tradition – with two men connected to the Island enlisting in the AIF.

Excerpt from the AIF Attestation Form of Peter Vakirudis, with his handwriting recording his mother’s residence as “Le mnos Island”. NAA Excerpt from the AIF Attestation Form of Basil Passa recording his birthplace as “Condopoul, Lemnos” and his wife Rosa’s residence in “Port Said, Egypt.” NAA

Some of the diggers who served on Lemnos – led by Lieutenant Ernie Hill – returned to Australia after the war and successfully lobbied for a new soldier settlement to be established outside Shepparton in north-east Victoria and for it be named Lemnos, no doubt in remembrance of the care and hospitality that they had received there. So how funny – and strangely appropriate – is it that Basil’s service file should be later misfiled by the Australian authorities, recording his birthplace as “Lemnos VIC” rather than Lemnos, Greece! But maybe this administrative error symbolises the connection between Lemnos and the Anzacs, tying Basil to those diggers who so loved the Island of his birth.

The story of Basil and Peter are just two small pebbles in the history of Hellenic migration, the movement of Greeks to Egypt and further to Australia. Their desire to enlist in the AIF shows the strength of their identification with their new country. Yet there is no memorial or public record acknowledging the service of these two unique Hellenic Australians either in Australia or in Greece. Their enlistment – and Basil’s service for Australia – should be commemorated in Australia and Greece.

The good news is that both myself and Christina – as part of the Lemnos Gallipoli Commemorative Committee – are now working on having Dimitris service recognised with a memorial plaque in his home village on Lemnos, from where he left many years ago to make his new life in Australia. And with this memorial Lemnos’ digger will finally be recognised. As we say in Australia, lest we forget.

Jim Claven is a trained historian, freelance writer and author of Lemnos & Gallipoli Revealed: A Pictorial History of the Anzacs in the Aegean 1915-16 published this year. He has researched the Anzac trail in Greece across both World Wars, and especially the Hellenic connection to Anzac through the role of Lemnos in the Gallipoli campaign. He has been Secretary of the Lemnos Gallipoli Commemorative Committee since its creation. Jim thanks Christina Despoteris for her assistance with this story.