Petros Mantalos’ penalty managed to save face for the underwhelming ‘Enosi’ against a ten-man Thessaloniki side, while the club from Piraeus suffered a late goal by Emmanouilidis, drawing level 1-1 with Panionios 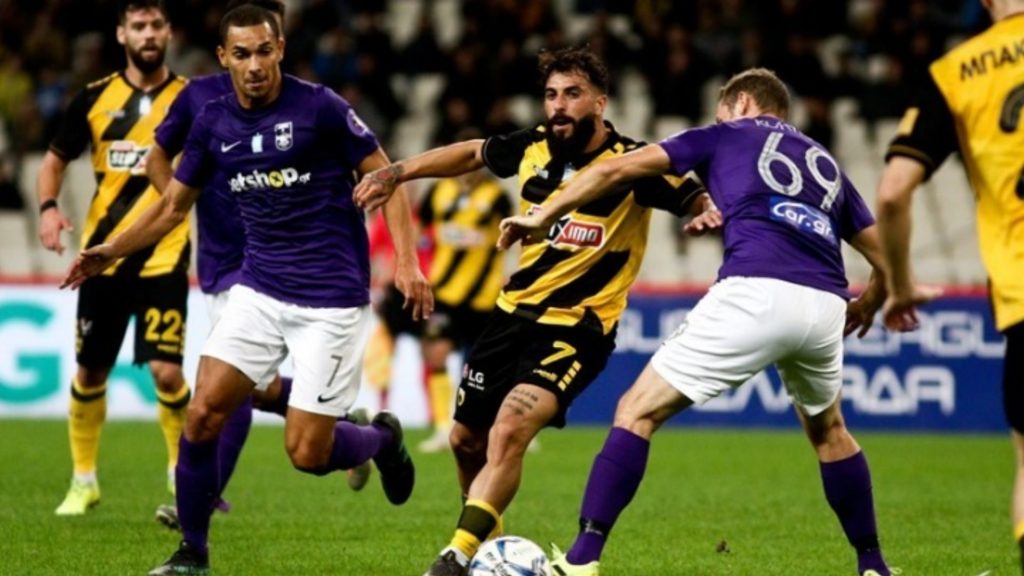 Aris remain undefeated since the arrival of new manager Michael Oenning as they walked away with a 1-1 result from Athens. Photo: APE/MPE

Round 11 of the Greek Super League was not for those faint of heart as it involved many late surprises and upsets.

In the most interesting game on the agenda, AEK hosted Aris at the Olympic Stadium in the battle between black-and-yellows of the north and the south.

The home side managed to assert their dominance from early on but couldn’t make the most of the high percentage of ball possession, while on the other hand Michael Oenning’s men seemed comfortable to just wait for the right opportunity to strike on the counter attack.

The first half was mainly uneventful but things started to pick up in the second, when Nigerian striker Brown Ideye attempted a clumsy challenge on AEK skipper Petros Mantalos, forcing the referee to send him off for an early shower.

Yet despite all this, it was the visitors that managed to take the lead just a few short minutes later after a wonderful counter by Nicolas Diguiny and Mihaly Korhut saw the ball end up at the feet of Daniel Larsson who had no problem defeating Vasilis Barkas and breaking the deadlock.

The “Enosi” fans immediately made their feelings known toward their players, with manager Nikos Kostenoglou bringing on Christos Albanis and Paulinho in order to increase the pressure on the opposition defence.

Eventually, they found a way to avoid defeat, when Andre Simoes was brought down inside the area by Lindsay Rose, with the Mauritian expressing his frustration towards the referee.

Mantalos successfully converted the spot kick, with neither team being able to find a second goal and the final result leaving both with a sense that they could’ve claimed more from the game.

A similar feeling could be felt in the Olympiacos dressing rooms after their game with Panionios, who are currently sitting at last place on the ladder.

The table leaders were expected to walk away with a comfortable win and focus on the difficult week ahead of them. Instead, they made life hard for themselves as they failed to convert on any of the opportunities they created during open play and needed a spot kick by specialist Mathieu Valbuena in order to unlock the home side defence.

But as it turned out, even that wasn’t enough, as their lack of concentration in their own third proved to come with severe consequences.

On the 88th minute of the game, former Panathinaikos winger Emmanouilidis broke free of Kostas Tsimikas and attempted a low shot that went past Jose Sa, sending fans of the home side in a frenzy and the visitors into a quiet retreat.

Now Pedro Martins will have his work cut out for him as his team have a new “roommate” at the top of the ladder, with PAOK beating AEL 1-0 at Toumba and both clubs level with 27 points each.

Next weekend, they will be called to solve their differences at the Karaiskakis, in a game that is highly anticipated by the entire Greek football community.