The boys from Piraeus wasted several opportunities and came under a lot of pressure until they finally broke the deadlock thanks to a successfully converted penalty by Youssef El Arabi in the dying minutes, with the Serbians missing a penalty kick of their own at the end of the first half 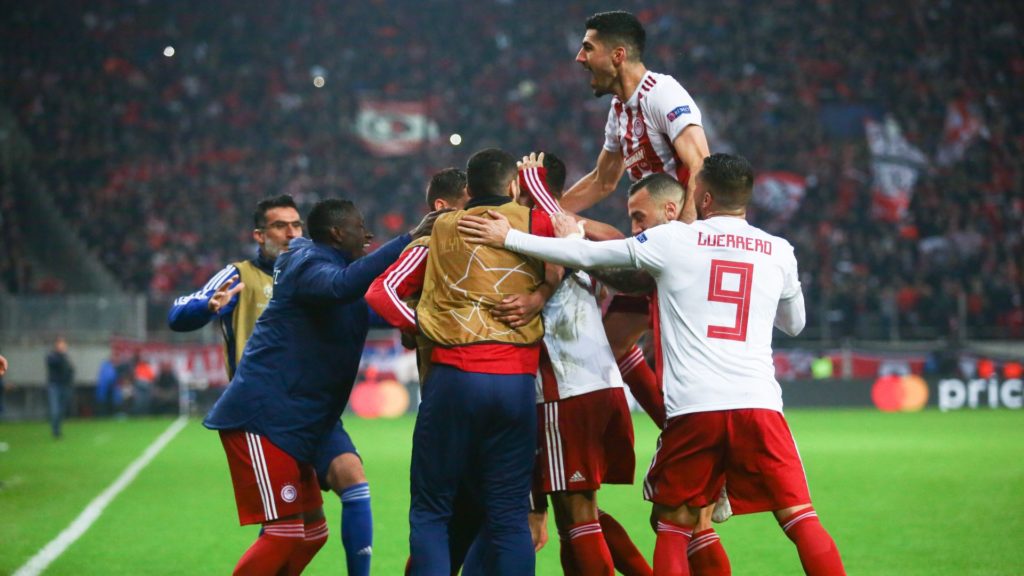 Olympiacos staff and players become one after Youssef El Arabi scores the only goal of the encounter. Photo: THANASIS DIMOPOULOS/EUROKINISSI

Olympiacos will continue playing European football in the next year.

The red-and-whites were able to overcome Crvena Zvezda (Red Star) 1-0 at the Karaiskakis with Youssef El Arabi scoring the only goal of the evening with a penalty kick in the 87th minute.

Portuguese manager Pedro Martins had several issues to deal with before the game, with the most important of them being the absence of play maker Mathieu Valbuena which, combined with the long-term injury of Kostas Fortounis, meant he would need to create his formation without an attacking-minded midfielder.

Mady Camara was eventually called up to cover that position, with the Guinean creating a lot of trouble for the Serbian defence.

Despite their defensive formation, the home side began the game with their mind on the attack and with some great combinations between Daniel Podence, El Arabi, Guillherme, Tsimikas and Elabdellaoui.

READ MORE: Greek Super League Round 13 Results: Comfortable wins for those at the top

But despite the ease with which they were able to enter their opponent’s area and the many chances they created, the Piraeus team just couldn’t get past goalkeeper Milan Borjan who seemed to be all over the ball.

And just as the home side looked the more likely to score, the Serbians began to come out of their shell at the end of the first half.

And on one of their rare visits towards Jose Sa’s goal, former Olympiacos player Marco Marin attempted to dribble past Gulliherme’s sliding tackle, with the Brazilian finding him with his left leg and tripping him over.

The referee immediately pointed to the spot, giving the visitors a rare chance to score a goal that would give them a huge advantage.

But it went to waste, as Portuguese striker Tomane cracked under the pressure, sending the ball to bounce off the crossbar.

The second half started with Olympiacos keeping their foot on the pedal, with El Arabi missing the greatest chance when he headed Tsimikas’ wonderful cross towards the woodwork.

Eventually the home side began to run out of gas, with Martins make the necessary changes to keep his team fresh (Guerrero in the place of Camara and Lovera in the place of Masouras), yet even then they kept looking for that crucial goal that would allow them to continue playing in Europe in the next year, with the crowd continuing to spur them onward.

READ MORE: Valkanis: Why Greece will qualify for 2022 World Cup like heroes

The opportunity that they couldn’t seem to create was eventually created for them, after a cross towards the Serbian defence was inexplicably handled by substitute Jander, awarding Olympiacos a late penalty.

El Arabi wasn’t as forgiving as Tomane and put the ball away, with the stadium erupting as a great weight had been lifted off everyone’s shoulders. In the final minutes, the home side created several more chances to put the game to rest, thanks to the Red Star players coming forward to look for an equaliser, but nothing else changed.

The final whistle saw Olympiacos advance to the round of 32 of the Europa League, knocking their opponents out of Europe altogether.

The game was held in a great atmosphere, with fans of both sides meeting up at the Syntagma square and going to the Karaiskakis stadium together as one.