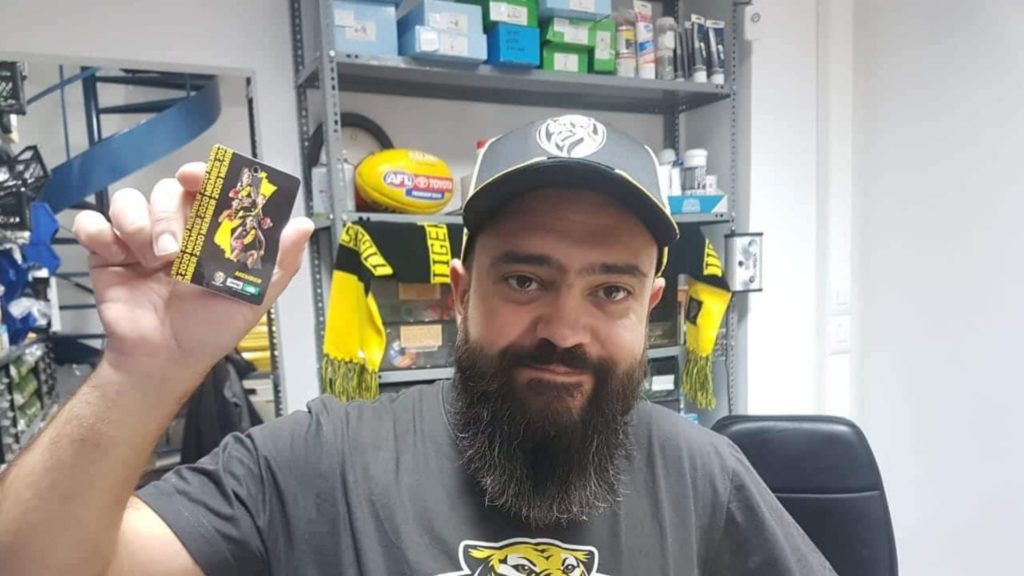 Yiannis Kosmas with his Richmond memoribilia at the back of his shop in Thessaloniki. Photo: Supplied

He lives in Thessaloniki, Greece is the father of young son, and Yiannis Kosmas runs his own hardware and coffee shop close to the White Tower.

He had little to do with Australia except when his close friend Kleanthi Papadopolous,moved to Melbourne a few years ago.

But along with their shared memories, the two friends now share a passion that is just as precious, their love of “footy”. Australian Rules Football that is.

Ask him which sport he prefers, football or football, the answer comes without thinking: “I prefer the footy, for me it is much better. I mean, I will first watch footy rather than football (soccer). It is a unique sport, it requires stamina, strength, intelligence and strategy.

“What really moves me about the sport is that the fans of both teams can watch the game together, without any incidents. – not like it is here.

His wife this he is crazy because gets up in the early hours on Sundays to watch footy games played on the other end of the world but, John says, she understands his passion and respects it.

Hi four-year old son, George, shares his father’s passion. Ask him which team he supports and he answers promptly: “Richmond” and he does not pause when others ask “what is that?”

He just waits impatiently for the time when he and his father will come to Australia to see for themselves  their team in action.

“My dream is to go to the MCB and watch a Richmond game,” says Yiannis who had no intention of travelling to Australia until he fell for the footy.

We hope with all our hearts that Yiannis realises his dream  to go to the MCG with his good friend Kleanthis just not when it’s the Tigers playing the Roos.