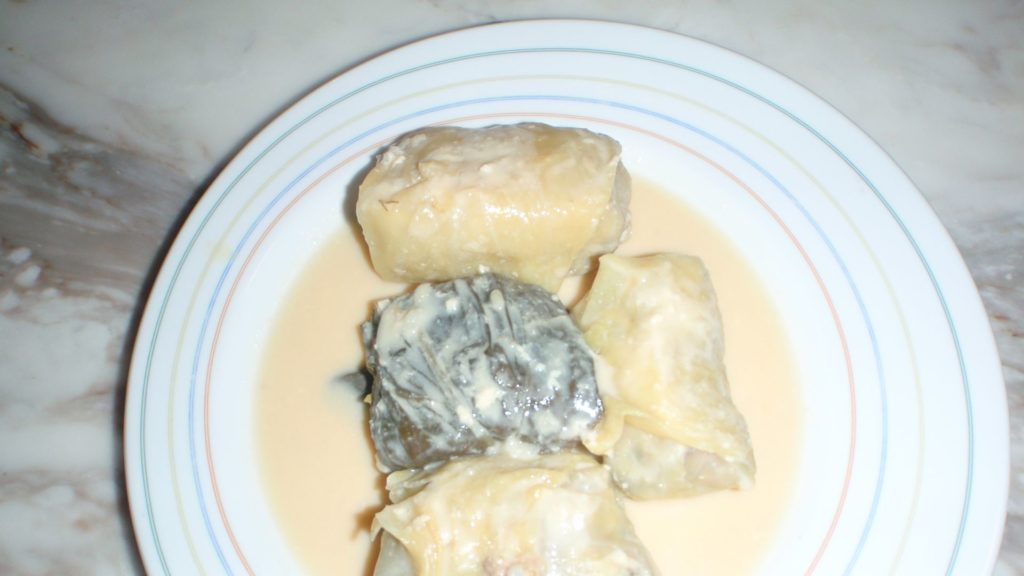 A popular staple for this time of year is Lahanodolmathes swimming in the “everGreek” avgolemono sauce that features in so many other dishes in the Greek Christmas cuisine. Photo: howtomakeitworkforyou.blogspot

Christmas in Greece does not have the carry the same religious weigh as Easter. The Greek festive season, which lasts from 30 November to 6 January, is a time for the family. Food is a big feature of this time of year.

Common Christmas pastries are kourambiedes, melomakarona, and thiples. One should not overlook the delicious karythopita from the Eptanisa group of islands in the Ionian Sea – a cake that combines cinnamon, cloves and walnuts soaked in spiced syrup.

On the savoury front, the Christmas table will groan under variations of roast pork and lamb for the main course and accompanying vegetables. Pork is the more likely choice because winter is the time when pigs are slaughtered in Greece.

Although it is becoming increasingly common that the turkey is becoming the meat of choice for many at this time of year. The Greek Christmas turkey is stuffed with rice, walnuts, raisins, chestnuts and mincemeat or giblets.

In Thrace, a popular dish is Bambo – a pork sausage with lots of herbs and spices which is allowed to simmer all night so that it is ready to eat after returning home from church.

In another part of Thrace,at Melissochori, the Msoura is prepared – a traditional Christmas meal that combines three meats of pork, beef and chicken braised with vegetables and rice in an oven.

Dolmathes is a typically autumn dish because this is the time when the leaves may be picked still fresh from the vine. Around Christmas, the vine leaves will have withered and the winter equivalent is the cabbage leaf. The resultant dish is lahanodolmathes (cabbage dolmathes) or lahanophylla yemista (stuffed cabbage leaves) is to be found on many a Greek table at Christmas.

The meat used is usually minced veal or a mixture of minced veal and pork. The Kozani version of this dish, toursi lahano, requires a bit more patience: the cabbage leaves are first steeped in brine for six weeks and are prepared with pork.

As at Easter, after the midnight service, the preferred dish after the church service on Christmas eve is avgolemono soup. This versatile, “everGreek” sauce is used not only as a soup or to flavour dolmathes but also to accompany vegetables, such as artichokes, and to thicken the cooking juices in such traditional Christmas fares as Greek pork with celery.

In the Zagarochoria, in the mountains of Epirus, they make a sweet pancake dish, the spargana (tou Christou) a tasty reminder of the baby Jesus’ swaddling clothes: shaped ribbons of dough which are deep fried until golden and then swathed in honey or petimezi (grape syrup) and covered with chopped walnuts, sesame seeds and cinnamon powder. Traditionally this dish is offered by women to women who have recently given birth.

In Macedonia, the women are not allowed to clear the table after the Christmas meal, they must do it the next day because Christ come in to eat after they are gone to bed.

Mpampes, which is boiled pork colon stuffed with the liver and spleen and herbs and spices, is a dish that is popular in Central Greece.

In Mani, a favoured Christmas doughnut equivalent is Lalagia or Tiganides.

The seasonal speciality in Kefalonia is Poutrida (pork) with Kavole (cauliflower) or Yob (cabbage).

On the island of Syros, the traditional dish on Christmas eve consists of cauliflower or broccoli and fish.

In Mytilini, on new year, they favour the local pastry Platseda, which is flavoured with orange blossom essence and sweetened with honey.

In Lassithi, in Crete, a Christmas Day dish is fried liver. But the main dish is usually pork roasted in the oven with lemon leaves. Sausages, such as Apakia and Syglino are popular, as are Tsigarides.

Another Cretan Christmas tradition is the Kaltsounia Kritis cheese pastries which, depending on how they are folded are either baked or fried.

A Christmas custom that is peculiar to Greece is the presence of the pomegranate which seems to be everywhere at this time of the year. It is usually hung above the front doors of homes and shops during the 12 days of Christmas.

The fruit has been a symbol of renewal since ancient times.

Before midnight, on Christmas Eve, the lights are turned off and the family gathers outside the house. At midnight a family member – often the man of the house – will smash the pomegranate on the ground outside the door. The more seeds that are scattered on the ground, the greater the luck for the family in the new year.

It is good luck is someone is stained by the juice of the fruit. And the fruit must be thrown with the right hand to bring blessings on the family.