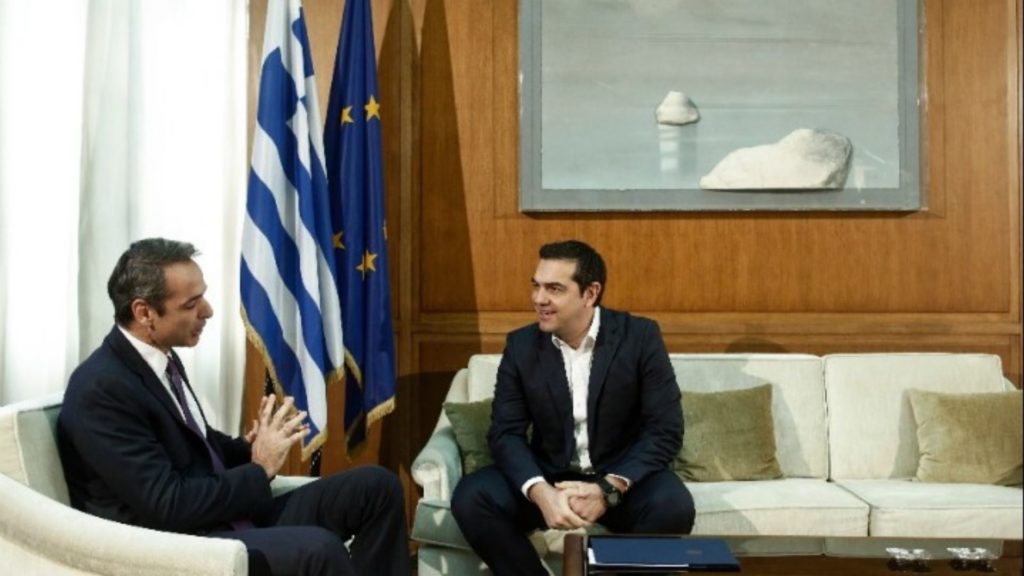 Greek Prime Minister Kyriakos Mitsotakis briefed political party leaders on the results of his visit to the United States.

A statement from his office said “the prime minister’s firm intention has always been, and still is, to convey and communicate with all the parties on major issues, especially so on issues of national significance.” The message states that Mr Mitsotakis is seeking intra-party consensus for the second time in recent months to ensure that there is consensus on the government’s diplomatic initiatives.

Meeting with Mr Mitsotakis, SYRIZA leader Alexis Tsipras asked for the suspension of the bill on the upgrading of Greece’s defence cooperation with the United States “until tangible support of our sovereign rights is guaranteed.” Mr Tsipras said he was concerned about the “growing tension in the region” and also noted the “overwhelming silence” of US President Donald Trump and the entire American leadership regarding the “most severe escalation of Turkey’s aggressiveness in the last 20 years.”

Mr Tsipras said that SYRIZA would “support the strengthening of the Armed forces” however wanted more documentation of the need to purchase F35 in relation to the cost.

Greek Solution party leader Kyriakos Velopoulos criticised SYRIZA’s rebuff of Greece’s defence cooperation with the US as being “hypocritical”. Mr Velopoulos said that “as far as Greek Solution is concerned, the major issues are the state of the economy, unemployment, and migration by illegal human traffickers. The economy is slowing down, joblessness is still high, while poverty and pensions still are major issues too.”

He said Greece needed to open itself up to more alliances, pointing also to Russia, Germany and India as a rising force.

“Greece should not be taken for granted by anyone, and US President Trump does not respect international law. It is good how Greece is citing international law, but it is unfortunately true that, in the end, the most powerful one enforces one’s will,” he said

Along the same lines, Movement for Change (KINAL) leader Fofi Gennimata said that it was discussed during her meeting to seek legal recourse at the International Court of Justice at the Hague on the issue of the continental shelf and Turkey’s violations of Greece’s Exclusive Economic Zone. Speaking to the press after the meeting, she said, “They can’t take us for granted.”

“All our allies should be aware that Greece will defend its national rights in every possible way,” she said. “Dialogue does not mean discounts.”

MeRA25 party leader Yanis Varoufakis disagreed with the timing of the Greek leader’s visit to the US. “The White House visit took place at the wrong time and was out of context,” he said, adding that the image of the embarrassed Greek prime minister next to the man responsible for the “recent, unethical killing of top Iranian officials in a third country – which has embarrassed even conservative EU leaders – has not helped Greece’s image.”

He said that the approaches of both Mr Mitsotakis and his predecessor, Mr Tsipras, in regards to Greek-American relations are faulty because they look to “virtual-only benefits”.

Mr Varoufakis said that it is illogical for the Greek governments to be saying ‘yes’ to everything in Brussels and ‘yes’ to everything in Washington especially when Mr Trump has stated “the European Union is an enemy”. The failure of Washington’s commitments to the EU are indicative that both the US and Israel will choose to abandon Greece by coming to a “silent agreement” with Turkey. MeRA25 proposed that Greece should appeal to The Hague to resolve disputes with Turkey and call for an international and regional energy network summit in the Mediterranean.