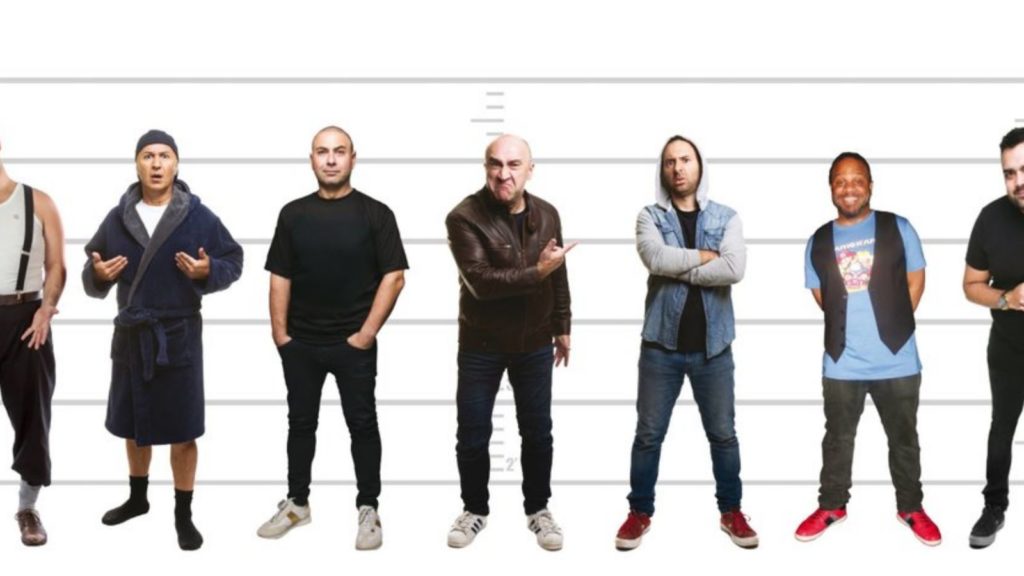 Seven comedians from different backgrounds lay claim to the ‘wog’ culture in their own way.

They take the stage of ‘The Usual Dagos’ and transport Aussie audiences back to their childhood days growing up in multicultural Australia.

The show features a star-studded line-up – each performer bringing his own brand of humour – that is sure to have audiences in stitches. Neos Kosmos caught up with legendary Greek comedian George Kapiniaris, hilarious Italians Joe Avati, James Liotta and Piero Viavattene, Turkish TV sensation Tahir, Haitian Ashley Fils-Aime and Dane Simpson, who is of Aboriginal background.

They answered our questions about what it means to be a wog in contemporary Australia and their answers were hilarious.

Greek Australian George Kapiniaris is an Australian-born stage, television and film actor and comedian who is known especially for his role in popular sitcom Acropolis Now, and is the man behind the serial’s theme song. He appeared on the cast of The Flying Doctors from 1988 through to 1994 in the role of Demetris “D.J” Goannidis, and also starred in the television comedy series Kick on SBS in 2007 as Takis Mavros, and later played Uncle Taso in the hit Australian stage play Alex & Eve in 2015. He is also extremely popular for his riotous comedy sketches.

A ‘wog’ is… a Well Organised Greek; a Worthy Oriental Gentleman; a cold; a black-faced toy; a name given to us ethnics by old-fashioned Aussies who feared foreigners… There are many definitions. It used to be just a derogatory term and then us wogs, dagos, ethnics, new Australians, continentals turned it on its head and adopted it as our identity.

The word ‘wog’ belongs to us ethnic Australians. Not just Greeks, Italians and Lebs. All of us. It’s a pity the word has been trademarked by one individual. Which moron public servant let that one through? Younger Greeks use that word because in Greece they’re not considered Greek and in Australia they’re not seen as being Australian. What are we then?

‘Wogs’ of my culture are funny because we are larger than life. We are loud, we are loving, we are filled with passion, we are over the top, we love food and culture, we love to laugh, dance, sing and are not offended when someone takes the piss.

Greek wogs are special because we are Australian, Greek, diasporic holders of our Greece’s culture and traditions of the past, caught in a time capsule from when Greeks of the past had manners and values, hospitality, kalosyni, generosity, care for others.

The greatest challenge of being a ‘wog’ is to hold on to the things our parents and grandparents gave us. We have people, even in Neos Kosmos, who criticise us for doing our ethnic/wog style humour. They have no problem with bouzoukia or jumping for the cross at Theofania or another version of Medea or Zorba the Greek or some corny Greek farce performed at some amateur theatre group venue. But when we try and tell our stories of growing up wog in Australia, we get frowned upon. the truth is the audience love our stories and they keep coming back for more and demanding more. Why? Because our stories are their stories and in every show I know that I modernise and talk about something new every time.

The greatest challenge of being a comedian is refreshing the material. It takes a lot of hard work and when you’re a professional like myself, you have to keep reinventing the wheel. A lot of new comics are playing characters and doing the material that I was doing 35 years ago. i’m happy for them to do my stuff but please don’t claim that you’re the next best thing when I was doing what you’re doing now before you were born.

Can you tell me a two-lined wog joke? I don’t do wog jokes. I do wog stories.

Tahir Bilgiç (born 12 December 1970) is an Australian comedian, film and television actor, of Turkish descent. He is best known for his role as Habib in the sitcoms Pizza and Swift and Shift Couriers. He is often credited, along with Sleek the Elite as the person who came up with the catch phrase ‘Fully sick’. The phrase ‘fully sick’ is used throughout each of the Pizza episodes and throughout the ongoing Paul Fenech sitcoms by the main characters.

A ‘wog’ is someone not born in the country they have adopted and live in – simple.

The word ‘wog’ belongs to no one and everyone. To all those who suffered racism growing up in schools or the workplace, to all those who were picked on because of their appearance or cultural background – they all surely “own” the word Wog.

‘Wogs’ of my culture are funny because they love storytelling, and more should be doing stand-up comedy.

Greek wogs are special because they are Greek and and if you are not a Greek Wog then you cannot become a special Greek Wog!

The greatest challenge of being a ‘wog’ is people having trouble with your name. I even dropped my surname to make it easier – i just go with Tahir- that’s it. But it’s still too hard for some people.

The greatest challenge of being a comedian and being wog, is doing some country or bush gig in a remote RSL club with a local audience. It’s like look at me – yes this is what a real wog looks like and I am real.

Joe Avati is a second-generation Italian born Australian who has become a fixture on the Australian comedy circuit alongside comic greats. He frequently performs sold-out shows to massive crowds in Australia, the UK, USA and Canada, where he holds the record for the fastest-selling show ever (6,400 tickets in 2 hours). His shows focus on universal themes, such as generational differences, fine cuisine and the immigrant experience.

‘Wogs’ of my culture are funny because their attitude makes them funny, their approach and interpretation of everyday life is hilarious and I find a lot of material in that existence.

Greek wogs are special because they are not Italian.

The greatest challenge of being a comedian is always having to be funny when you are not on stage and coming up with new material.

Can you tell me a two-lined wog joke? What do you get when Tahir, George Kapiniaris, James Liotta, Pierro Viavattene, Dane Simpson and Ashley Fils Aime walk into a bar? The usual dagos.

James Liotta is an award-winning Italian Australian performer who has travelled Australia over the last 20 years as a stand up comedian. He has appeared in TV shows such as Thank God You’re Here, Utopia, Underbelly Squizzy and a number of high-profile TV commercials. He has toured nationally as Joe Avati’s special guest, honing his act as an ethnic comedy performer.

A ‘wog’ is anyone of European background with lots of back hair.

The word ‘wog’ belongs to all of us. It unites our identity as a particular group.

‘Wogs’ of my culture are funny because they will argue with you and love you all at the same time.

Greek wogs are special because they want to be like Italian wogs! (Ha! I’m Italian so I can say that!)

The greatest challenge of being a ‘wog’ is most probably acceptance by the mainstream.

The greatest challenge of being a comedian is trying to make most people laugh, with you and not at you.

Can you tell me a two-lined wog joke? A Greek family took their one-day old newborn baby boy to the barber to get a hair cut. The barber took a look a the baby and said, “What hair? This baby is bald”. The father replied, “We’re Greek… The hair is on his back!”

Whittlesea comedian Piero Viavattene is an online comedian specialising in sketch comedy with his online show ‘The Sicilianos’. He inserted himself in such shows as The Voice and Marrried at First Sight. He does lives shows with his peers, incorporating live sketches, stand-up comedy and parody songs.

A ‘wog’ never smiles in photos

‘Wogs’ of my culture are funny because after 40 years you still can’t speak English…really?

Greek wogs are special because they are not Macedonian

The greatest challenge of being a ‘wog’ is hairy ears and knuckles.

The greatest challenge of being a comedian is hairy ears and knuckles.

Can you tell me a two-lined wog joke? Why did the wog cross the road? Because she was trying to catch the chicken!

The Haiti-born comedian grew up in Miami, Florida, and has been performing since the age of 18. He has toured extensively throughout his career to Sweden, Denmark, Finland, Amsterdam and Norway and Australia. He has appeared on shows like MTV’s Sink or Swim, SiTV’s Stand-up Comedy Showcase and has featured in the Australian comedy movie How I Became A Vegetarian.

A wog is a Western Oriental Gentleman

Wogs of my culture are funny because I’ve tour with them and see their humour firsthand.

Greeks are special wogs cause they’re not Malakas.

The greatest challenge of being a comedian is having to reinvent yourself after you finished your years perfecting your act.

The greatest challenge of being a wog is actually not being one…like literally, I’m a negro.

A two-lined wog joke? I don’t mean to sound racist however, how did your DAY-Go?

READ MORE: Love me Tinder: The legendary Effie takes on dating in the internet age

The first time I heard the term wog was my school friend’s dad referring to the flu.

The word wog belongs to the people who have reclaimed it as their own.

Wogs of my culture are funny because I find ethnicity funny. Particularly proud groups.

Greek wogs are special because I can relate so much to the humour.

The greatest of challenge of being a wog is …

The greatest challenge of being a comedian is relating my jokes to mainstream audiences.

A two-lined wog joke? How did an Aboriginal man get onto this line up? They asked me where I’m from and I said, “I come from Wagga Wagga”… They said, “Close enough!”

RETRACTION The performance ‘The Usual Dagos’ was wrongly titled ‘Born to Be Wogs’ in Saturday’s issue of Neos Kosmos.