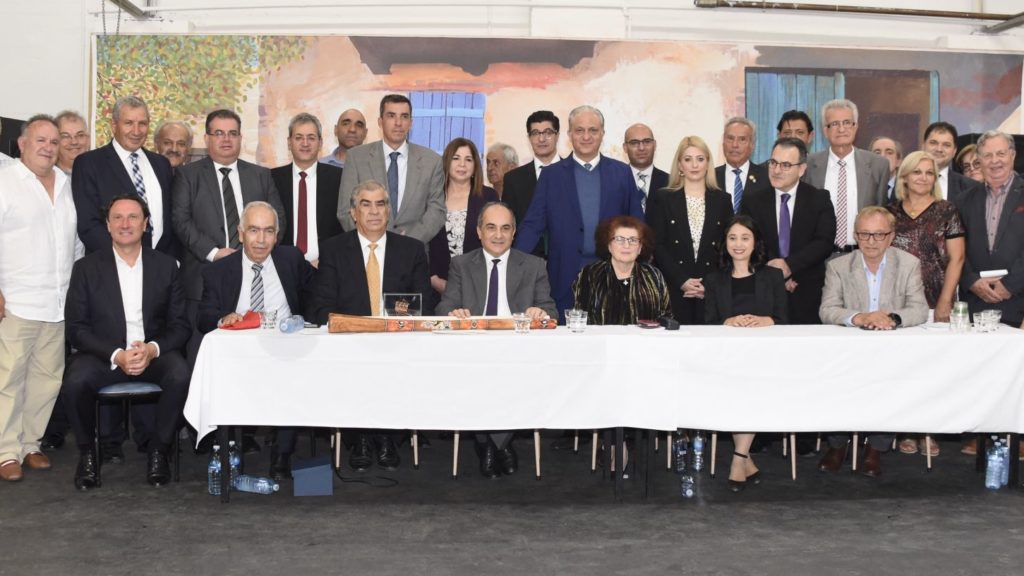 The impending visit of Turkish President Recep Tayyip Erdoğan to Australia was a key talking point during a meeting between Speaker of Cyprus’ House of Representatives, Dimitris Syllouris and members of the community in Melbourne this week.

Asked how Cypriot and Greek community organisations should approach the visit, Mr Syllouris advised that they coordinate their response with the Foreign Ministry and High Commissioner for Cyprus in Australia. He added the important role to be played by local MPs and government officials, encouraging them to highlight the consequences of the Turkish President’s actions: that wars are killing people, damaging neighbouring countries, and hindering growth, and to encourage a more peaceful, effective approach.

Mr Syllouris and a delegation of Cypriot Members of Parliament were officially invited to visit Australia this month for a visit that has seen them visit Melbourne and Canberra before heading to Sydney.

The Speaker made a point of acknowledging the important role played by the diaspora in rallying for a resolution to the Cyprus issue. Members of the community who were in attendance assured Mr Syllouris their support would continue, stating that while they are physically present in Australia, that their souls and hearts are in Cyprus.

Mr Syllouris told Neos Kosmos that reunification of Cyprus would require the release and withdrawal of Turkish troops and the safeguarding of displaced individuals’ right to return to their properties – something Turkey thus far has been unwilling to do, instead continuing to seize things that are not their own in other countries in the region, such as Libya.

“This makes us more pragmatic, not pessimistic,” he assured.

READ: Read the extraordinary letter Trump sent Erdogan telling him not to “be a fool” – it is no joke

This would entail building solid partnerships with Egypt, Israel, Jordan and Gulf countries that have the same, if not more, concerns about Turkey, so as to tackle the matter together.

While in Melbourne, Mr Syllouris also took part in an event organised by the Australian Chamber of Commerce and Industry, and attended St Andrew’s in Sunshine West. The Speaker expressed a lot of optimist about Cyprus’ economy, citing growth of three per cent – the highest in the EU. He said Cyprus would be a good base to conduct business with the rest of the EU for Australians, and stressed the importance of bilateral cooperation, especially across tourism, trade and education. Mr Syllouris encouraged Australian academics to look at part-taking in research at Cypriot universities with foreign language programs, which could be made possible with European funding.

The Speaker continue discussions on the strengthening of relations between Cyprus and Australia in Canberra on Tuesday with his Australian counterpart Tony Smith. Mr Syllouris briefed Mr Smith on developments in the Eastern Mediterranean.

Along with discussing defence and trade, issues surrounding the present and future of migration flow and the impacts of Brexit were also explored.

Next Mr Syllouris and his delegation are heading to Sydney for two days on Thursday, where he is also scheduled to meet with Archbishop Makarios.