Members of the Pankorinthian community with the new Corinth Anzac plaques at Nikos Cakes and Café in Fairfield. Photo: Jim Claven 2020

On show were two new memorial cast-bronze plaques which will soon be on their way to Greece to be installed at two important sites in the Corinth region. One will commemorate all who fell during the battle of Corinth Canal which took place on 26th April 1941 and specifically the Australian 2/6th Battalion who defended the key bridge crossing. The other will commemorate the estimated 8,000 Allied soldiers who were incarcerated at the site of the former POW camp established by the Germans at Corinth between April and June 1941 – and the local villagers who helped them. It has been my pleasure to complete the research into these plaques, identifying the location for their erection and helping with the organization of the unveiling events planned for Greece.

The Pankorinthian community has been playing a key role in raising awareness of their regions part in Australia’s Anzac story through the holding of educational seminars, connecting with the descendants of Australian soldiers who came to the region – such as Shirley Devery who attended the function – and by participating in Melbourne’s Anzac Day parade, marching alongside the 2/6th Battalion descendants.

Jenny Kraspolouki, President of the Pankorinthian community, told the crowd that this work was a very important part of their work, connecting both the Greek and Australian communities, through recognising the sacrifices made during the Second World War. “These two plaques will finally recognise these two important parts of the Hellenic link to Anzac. This recognition is long overdue and we are glad to have played a role in this project. We hope that when erected in Greece, both these locations will be the site of annual commemorative services in every April, taking their place alongside the Anzac Day commemorations at Phaleron War Cemetery”, she said.

Christina Despoteris, Vice-President of the Lemnos Gallipoli Commemorative Committee, has liaised with the local authorities in Greece over recent weeks to facilitate the erection of the memorials. “I am personally very glad that these memorials will join with the Australian Pier memorial on Lemnos and the others planned to be erected next year in realising our dream of an Anzac Trail across Greece,” she said.

As a historian, I have been researching the Anzac Trail across Greece for many years in both the archives in Australia but also on the ground in Greece. It has been my pleasure in recent years to work with various Hellenic community groups from the Peloponnese to raise awareness of this link between Greece and Australia. In 2017 I wrote a series of articles for Neos Kosmos telling the story of Peloponnese connection to Australia through the Greek campaign of 1941. With these plaques two important parts of that story will now be memorialised in Greece – at Corinth.

Tens of thousands of Allied troops made their way across the Peloponnese in the dying days of the Greek campaign on the mainland. This fighting retreat saw a number of deadly engagements – at Corinth Canal, Tolos and finally at the waterfront at Kalamata. After the battles, many of these troops – including many Australians – were unable to be evacuated to Crete or Egypt. Many would experience the terrible conditions at the POW camp the Germans established at Corinth – the beginning of their long days of captivity. Others would evade capture or escape and helped by brave local Greek civilians, make their escape, a number from the little villages which dot the coast of the Peloponnese, including those on the Mani such as Trahila.

I am very proud of the Pankorinthan community having helped produce these memorials which will be lasting legacy both of the commitment of their own community and for the people of Corinth in Greece.

The commitment to erect an Anzac Trail in Greece was made in 2018 as part of the Gallipoli commemorations on Lemnos, with the local Lemnian authorities committing to work with Melbourne’s Lemnos Gallipoli Commemorative Committee to create the Lemnos part of the trail. The Trail concept is to connect Greece’s existing Anzac-related memorials and work to erect new ones. The aim is to commemorate this important aspect of Greece’s link to Anzac but also to assist descendants and other commemorative travellers in their desire to walk in the footsteps of the Anzacs in both the First and Second World Wars.

In 2018 the Anzac Trail in Greece Organising Committee was established in Melbourne, bringing together a number of local organisations committed to realising this dream. That year the work of the Committee began with three new plaques being unveiled as part of the Anzac Trail – the Australian Pier memorial on Lemnos and the Nino Bixio and Sebastiano Veniero tragedy memorials at Pylos and Methone. This work was undertaken by Melbourne’s Lemnos Gallipoli Commemorative Committee, Pammessinian Brotherhood Papaflessas and Panpylian Brotherhood Navarino, in collaboration with the local authorities in Greece.

Along with these two new Corinth memorials, four other memorials are also being prepared for installation in Greece – two for Lemnos’ part of the Trail and two for other Anzac-related sites in the Peloponnese. The former will commemorate Private Dimitris Passa – the Anzac from the village of Kontopouli on Lemnos – and the role of the Australian Navy at Lemnos during the Gallipoli campaign. Another will be erected at Kalamata to commemorate the battle fought on its waterfront on 28th April 1941 and the remaining plaque to be installed at Trahila commemorating the evacuation of Allied escapers and evaders from the coastal villages of the Mani after the fall of the Greek mainland to the German invaders. 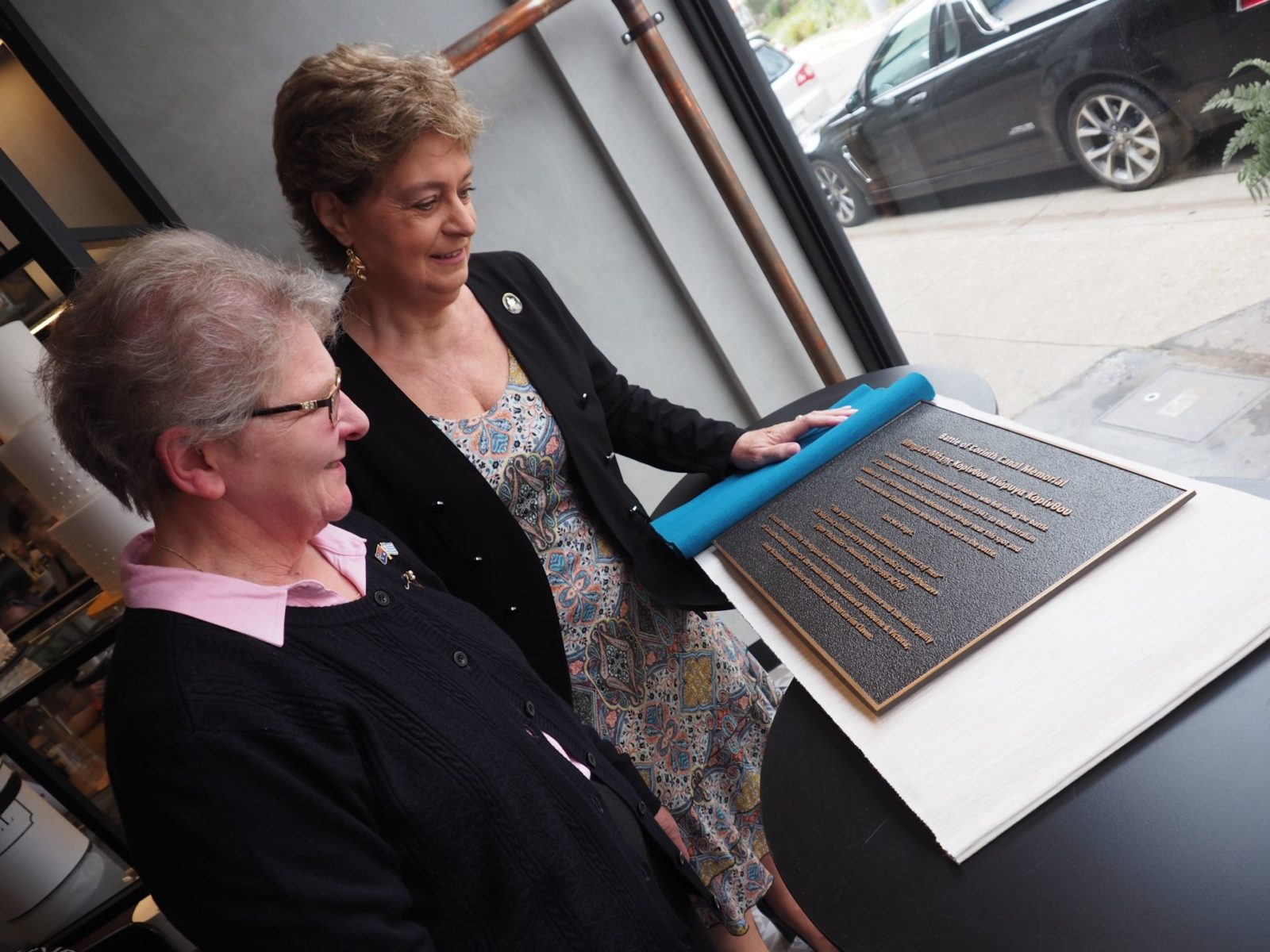 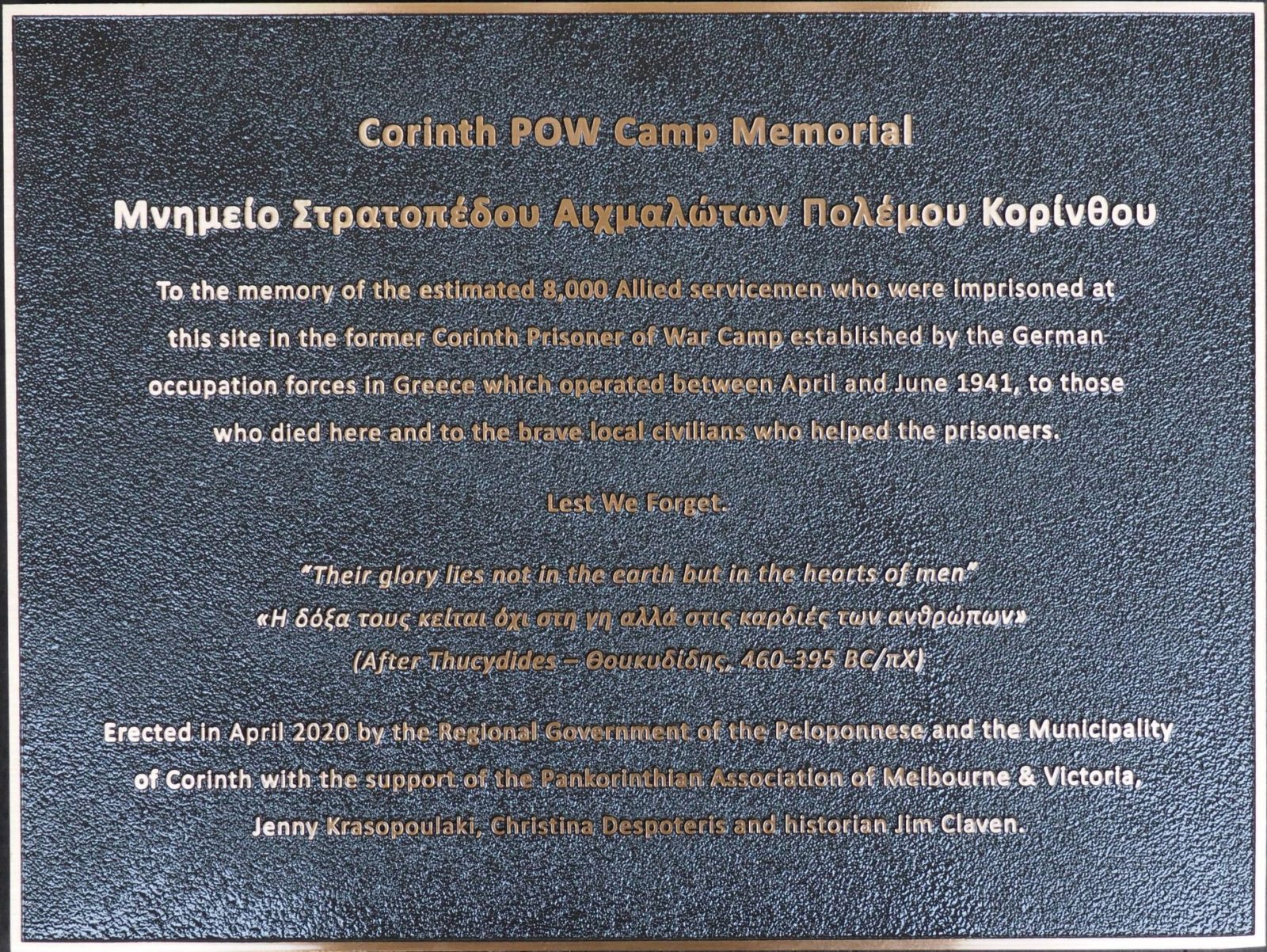 It was planned that these new memorials would be erected in April this year, as part of the annual Anzac commemorations held across Greece, Lemnos, Athens and in the Peloponnese. Due to the recent corona-virus issue, these have been postponed until next year as part of the 80th anniversary of the Greek Campaign of 1941. We welcome all who wish to join us at their installation and these important extensions of Greece’s Anzac Trail.
Jim Claven is a trained historian, freelance writer, Secretary of the Lemnos Gallipoli Commemorative Committee and Convenor of the Anzac Trail in Greece Organising Committee. He is the author of Lemnos & Gallipoli Revealed: A Pictorial History of the Anzacs in the Aegean, 1915-16. He can be contacted on jimclaven@yahoo.com.au