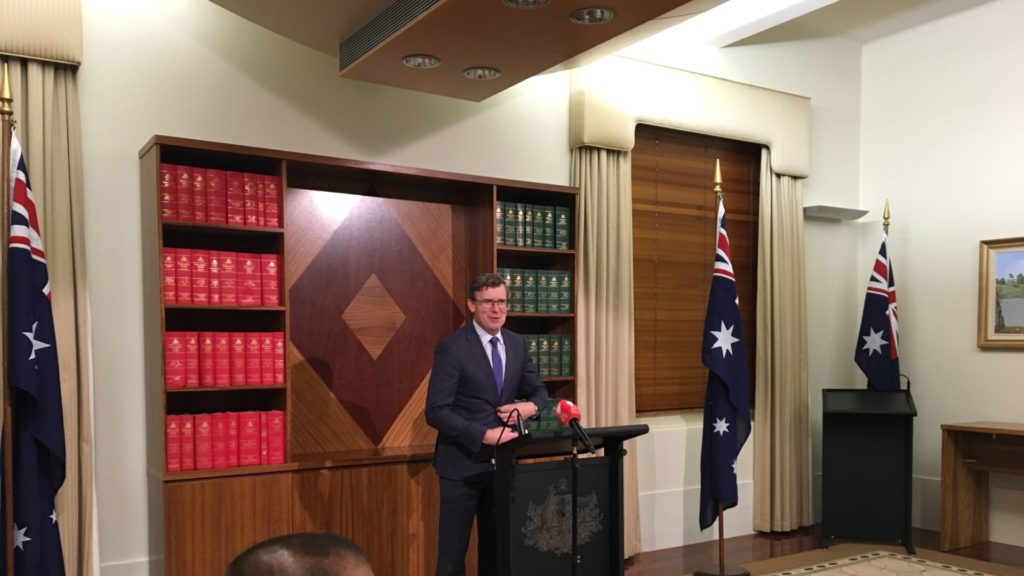 The coronavirus crisis has spawned uncertainty in the best of cases, but more so for multicultural communities – especially visa holders.

Australia’s Acting Immigration Minister Alan Tudge has been fighting an uphill battle to meet with different foreign community stakeholders in Australia via video conference calls to hear their specific concerns and set up strategies to help migrants who are stranded, in limbo and whose lives are fraught with uncertainty. “Thank you to all the multicultural groups that I know are doing so much to support members of your communities, whether it be through food distribution or through supporting people who may be isolated by themselves or through other mechanisms,” he said, adding that despite the curve having been somewhat flattened there’s “still a long way to go”.

Changes to temporary migration visas recently announced were based on three principles, which will be periodically reviewed. At the moment, Mr Tudge said Australia is: (1)  “naturally prioritising Australians and permanent resident holders for the work which is available and work we are making available”; (2) “wherever possible, we are asking temporary visitors to continue the normal expectation that they are able to look after themselves while they are here, and we are helping to facilitate that in part through giving them access to their superannuation and providing flexibility to visa expectations” such as allowing them to continue to work at reduced hours; (3) “we need to maintain our critical industries and temporary migration can help facilitate that”.

Some go home, others stay

Australia Prime Minister Scott Morrison’s message telling temporary visa holders to consider returning to their home countries was reiterated by Mr Tudge. “The message for visitor visa holders was ‘go home if you are unable to be able to support yourselves and you’re worried about not being able to get a flight’ and many people have taken advantage of that,” Mr Tudge said, refering to data over the last few weeks that show “many thousands” have left.

“Other categories of visa holders are still needed,” he said, pointing to backpackers and international students working in critical industries whose visas are being extended.

“Our message is targeted at different visa category holders, but there is that underlying visa principal for temporary visa holders. That is, the expectation that you are able to support yourselves.”

Temporary visa holders abroad however cannot enter the country as Australia’s borders are closed to non-nationals or visa holders who are not permanent residents. “I understand it is very difficult, but they will be in their own country,” Mr Tudge said.

“The vast majority of coronavirus infections are coming from overseas to Australia,” he said, adding that citizens and permanent residents returning to their homes are being strictly policed to ensure that they are in self isolation.

There is some solace however, that principles of compassion will continue to apply, however these will be unique cases. Those seeking compassion on the grounds of having their families split up, eg in cases where parents are in Australian and children are abroad, do not qualify as ‘exceptional’. “There are provisions for exceptional circumstances, but that won’t apply in this case,” he said.

Emergency medical attention, however will be offered to temporary visa holders in the country who “will get support if they test positive for coronavirus. They won’t be discriminated against,” Mr Tudge said.

Mr Tudge responded to the question which Neos Kosmos posed regarding the already huge backlog of visa applications and citizenship processing.

“Citizenship is a difficult one,” Mr Tudge said. “Obviously citizenship ceremonies have had to change because we can’t have big groups of people gathering together. In relation to citizenship ceremonies, we have put in place a mechanism where people can still become a citizen but they will do so with a hookup with each individual. There will be an individual at a time, we have to make sure that the proper identity is done, the proper declaration is done, so that process is still continuing. I know that many people want to become a citizen as quickly as possible. I can understand that, and that is why we are putting those mechanisms in place.”

The news is not as positive for those still at the beginning of their visa journey, especially those requiring English language testing. “These are more complex (issues) as this testing requires people in a room who are in close proximity – and we’re still working on how this will be done – but at the moment we haven’t got that operational,” he said, however he added that there is nothing preventing foreign nationals already in Australia from transferring from one visa class to another provided they pay the fees and surcharges involved.

Those abroad applying for offshore visas will need to wait even longer as the process has come to a standstill. “English language testing, medical testing… Often these things come to a close in other countries because of COVID-19,” he said, reiterating that borders are closed to temporary visa holders abroad.

Mr Tudge said tourists know when their visas expire and should plan for this. “The overall message is ‘take the opportunity today to take that flight home, particularly if you don’t have family support in Australia’,” Mr Tudge said. “If somebody is stuck in Australia, and they simply cannot get a flight to their country because their country is locked down, and there are countries like that, then of course they should contact the Immigration Ministry.”

Mr Tudge encourages anyone with a feasible problem to contact his department. Responding to a question by Neos Kosmos regarding Greeks currently stranded without money to afford flights back to Greece because their flights were cancelled and visas have expired, he said: “There are still flights back to Europe as you are no doubt aware. I don’t have the exact number of tourists from Greece in front of me, but I encourage that, where they can, to get a flight home,” he said, encouraging people to search for those flights but adding that they should get in touch with the Immigration Department if there is a hitch or any other extenuating circumstances so that a solution can be found.

READ MORE: A handy guide for Greeks in Australia needing support during the coronavirus crisis: Help is at hand

The expectation that first year students support themselves will be enforced. “For 2nd and 3rd year students, we expect them to lean on their families, use their savings, get access to their superannuation and work up to 20 hours a week,” he said, by also pointing out that many universities with international students have provisions in place. “We thank them for that.”

Mr Tudge announced that despite there being 6,415 cases testing positive for coronavirus in Australia on Wednesday morning, there was no case at any of the detention centres. “We have put in place other measures to prevent their being infections, such as fewer visitations; plus there are plans should an infection arise,” he said.