Will you be keeping alive the food traditions of Easter this year? 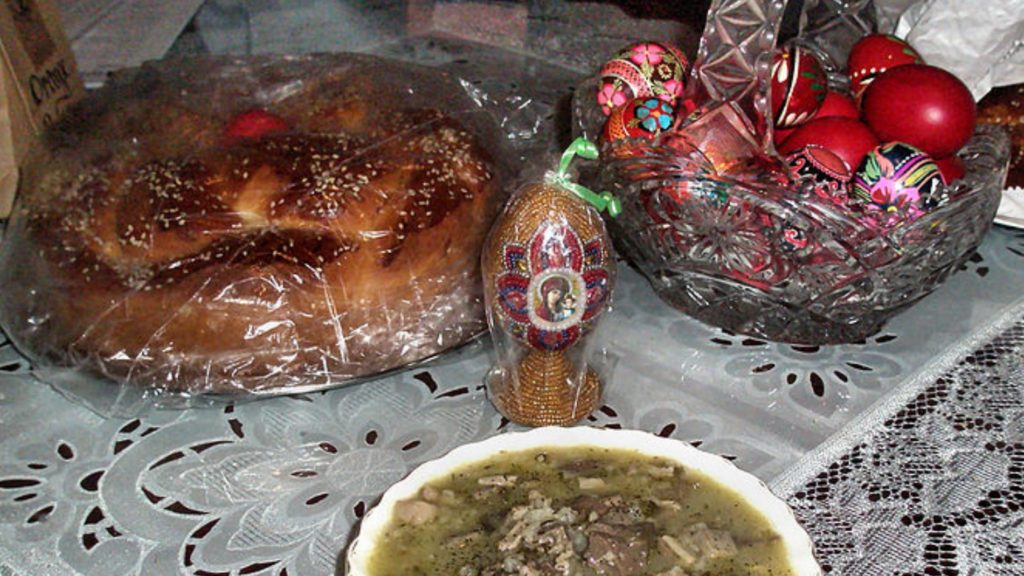 There’s nothing like Greek Easter food traditions. Below are some of our favourites.

No Easter table is complete without red eggs – hen laid eggs, which are dyed bright red either with dye or naturally with onion skins – on Holy Thursday, or any day leading up to Easter Sunday.

While in modern times, some enjoy dyeing multi-coloured eggs, traditionally they are red to represent the blood of Christ, while the egg itself represents the tomb from which he arose following his crucifixion.

Once dyed and ready, the eggs are used as an addition to the tsoureki (Easter bread), as well as decorations, and in the egg cracking game known as tsougrisma – known to bring out everyone’s (competitive) inner child. The first game is often played at midnight mass, held on the night of Holy Saturday, where Orthodox Christians bring their ‘lucky’ egg along or once at home to break the Lenten fast. Once midnight strikes, and the Anastasi takes place, each person holds a red egg in their hand, one holding their egg up high, declaring Christos anesti (Christ has risen), while the other holds theirs low and confirms Alithos anesti (Indeed, he has risen). The person holding their egg on top of the other, taps their egg into the other, in the attempt to have the winning egg – the one without a crack. Aside from the belief that the winner has good luck for the rest year, the act of cracking eggs of course has a deeper meaning, symbolising the emergence of Christ from the tomb; his resurrection and rebirth to eternal life.

READ MORE: Dyed Greek Easter eggs and how to win at the art of ‘tsougrisma’

Following the Anastasi church service at midnight on Holy Saturday, church-goers go either to their own home or that of a close relative or friend, to break the 40-

day Lenten fast with a feast featuring the first dish containing meat, magiritsa. It is a dish that sees many divided – and squeamish for that matter – and not because it can’t be tasty (plenty of dill, lemon and olive oil is said to do the trick), but because of its contents. Made with lamb offal, it includes everything from intestines, liver, and heart, as well as the lamb’s head and neck, and is topped off with avgolemono (egg lemon sauce).
Traditionally the soup is prepared on the afternoon of Holy Saturday, ahead of the midnight church service. It is eaten under the pretence that it is the best meal to ease the digestive system back into eating animal foods again. Although it also had a practical side, as it was a way to use up all parts of the lamb, which is eaten on Easter Sunday, without leaving any waste behind.

READ MORE: Beyond Magiritsa – a bittersweet tale of longing

As well as preparing the magiritsa on Holy Saturday, home cooks are also busy preparing the lamb for Easter Sunday. It is usually marinated in lemon juice, herbs, spices and salt, and left over night to soak up the flavours before either being placed on the souvla (spit), or in the absence of one, slow cooked in the oven.

The reasons lamb is consumed on Easter Sunday have their origins in bible references, the main one being that of Jesus being the Lamb of God. Lamb in the bible was often a sacrifice, offered up as a guilt offering for those who had sinned. However at Easter, Christians are reminded of Christ’s selfless act in dying on the cross for our sins, and so his sacrifice is acknowledged and commemorated by eating lamb.

READ MORE: Greek lamb and goat sales set to plummet thanks to Covid-19

Tsoureki is a sweet bread similar to brioche, which is traditionally made on Holy Thursday to be consumed on Easter Sunday. While the dough can be formed into a variety of shapes, the most common is the braid. The tsoureki, the named said to be derived from the Turkish word for bread made with yeast ‘corek’, symbolises the resurrection of Christ and his rebirth. Some are topped with a dyed red egg, which is the symbol of Christ’s blood.

While koulourakia may be eaten and served up year round today, they are traditionally known as Easter biscuits. They were the pastry eaten to celebrate Christ’s resurrection and the end of the Lenten fast, a humble treat containing all the deliciousness that comes with the combination of butter, egg and sugar (amongst other ingredients). They are often found on the Easter table, and are gifted from one family to another.