Just before the birth of her daughter in 2018 Greek Australian journalist Stephanie Timotheou, 29, went on a hunt to find a quality sentimental children’s book that represented Greek families in Australia in order to gift it to her daughter’s two grandmothers.

After a few months of searching with no luck, Ms Timotheou realised that there was no book of that kind in Australia, and no stranger to the written word, she decided to write her own book series celebrating the Greek families living in Australia.

“The idea was born just before my own daughter Anthea was born. I started working on my first book of the ‘Ikoyeneia’ series while I was on maternity leave,” Ms Timotheou said.

“I was on the hunt for a really special book that I could give her future grandmothers, but I found it quite difficult to find what I was looking for.

“After months of searching with no luck, I thought to myself, ‘why not write one of my own?’ and that’s exactly what I did.”

Cooking with Yiayia is the first book in the four-part series, and it is a bilingual rhyming book that talks about one little Greek girl and the beautiful bond she develops with her yiayia through cooking.

The book is written to encourage children to learn the Greek language, while also giving the opportunity to both grandparents to read the story to their grandchildren in Greek.

“Cooking with Yiayia is designed so our Greek language and culture isn’t lost as generations go on,” Ms Timotheou said.

“My biggest fear is that when our grandparents and parents are gone, nobody is going to teach our children about Greek culture and the beautiful traditions we have so I am hoping that my books will find a place in every Greek Australian home keeping our language and culture alive.”

The other three books of the Ikoyeneia series are Gardening with Pappou, Playtime with Baba and Bedtime with Mama.

READ MORE: Yiayia, pappou in distress during COVID-19 because they want to hug their grandchildren 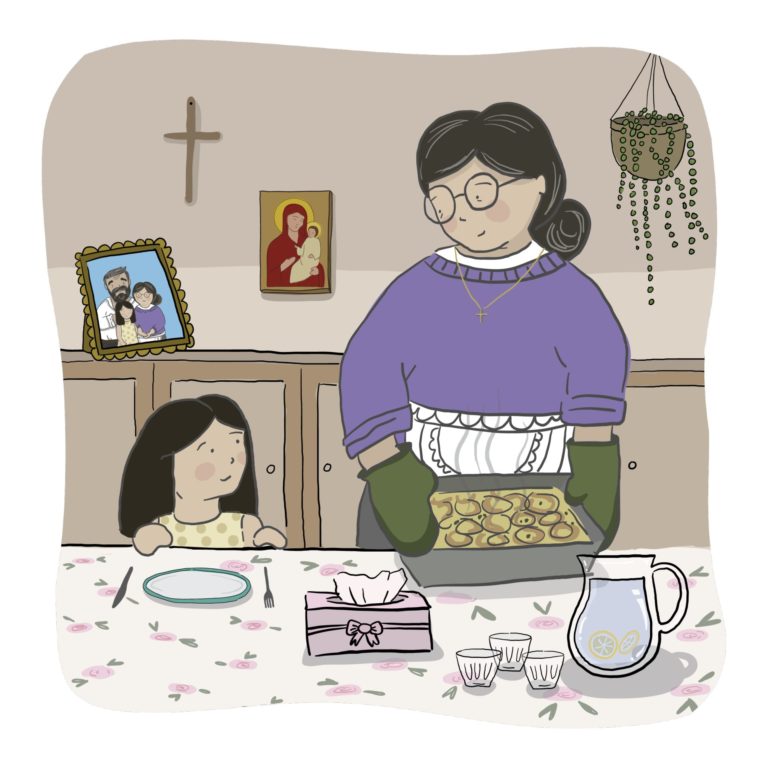 All four books are written in such way that they depict a lot of things Greek Australian families do at home.
“I always wanted to write a children’s book and to combine my passion for writing with my passion for my Greek heritage was a dream come true,” Ms Timotheou said.
Limited copies of Cooking with Yiayia are now available for pre-order at www.ikoyenia.bigcartel.com and expected to arrive in August 2020.